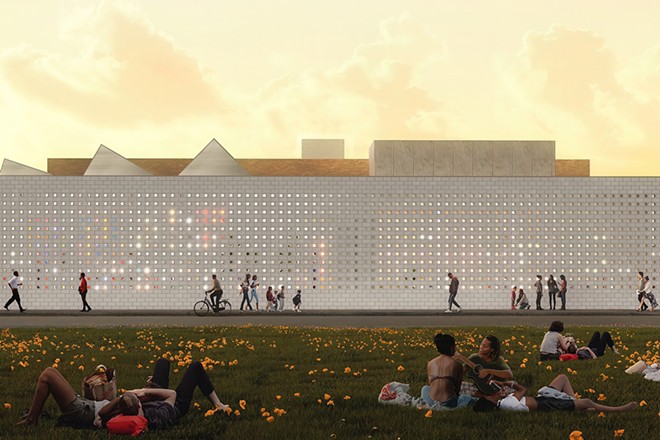 Library Street Collective has big plans for its community art complex, The Shepherd, which is being built around a 110-year-old church in Detroit’s East Village.

LANTERN is a rehab of a former commercial bakery located at 9301 Kercheval St that was built in the early 1900s. It will feature artist studio spaces, a gallery, retail space, and an accessible outdoor courtyard.

Most importantly, the main floor of the building will be the headquarters for two local art non-profits, Progressive Arts Studio Collective (PASC) and Signal-Return.

PASC is the first exhibit program and art studio that exclusively features artists with developmental disabilities and mental health needs in Detroit and Wayne County. The organization will use LANTERN for workshops, studio space, and exhibits showcasing the work of participating artists. Signal-Return is a nonprofit organization focused on preserving traditional letterpress printing.

“The core of our mission in East Village is focused on creating an inclusive community centered around the arts,” Anthony Curis said in a press release. “ Progressive Art Studio Collective (PASC) and Signal-Return are two highly impactful nonprofits providing vital support and inspiration to the local arts community. We’re thrilled to welcome them to the neighborhood.”

Work on The Shepherd is still underway. Anthony Curis recently told Metro Times that the campus, including a sculpture park honoring famed Detroit artist Charles McGee, should be open by spring of 2023.

The Curises are partnering with New York-based architectural firm OMA to rehab the building on Kercheval that will become LANTERN. A projected completion date for the project has yet to be announced.

In the meantime, PASC is launching a five-month pop-up series near the Eastern Market at the Vella Group’s conference center. The series will include four different exhibits over the course of five months, all highlighting Metro Detroit artists with developmental disabilities.

“Although we are very young, we are filling a huge need in the Detroit and Wayne County community to provide exposure to artists with disabilities and advance disabled creative expression,” PASC program manager Anthony Marcellini said.

The first exhibit, Liberty Realm, opens on Friday, May 6 at the Vella Group, located at 1410 Gratiot Avenue. An opening celebration for the show is scheduled for 5 p.m.

“Since being introduced to PASC, I have witnessed amazing work come to life and the
incredible joy it brings to the artists, especially when it is shared with the public," Detroit artist James Benjamin Franklin, who curated Liberty Realm, said. “This program has such a positive impact on the community because it shows the magic we unlock when people are shown a path to express themselves creatively.”