The HUB Stadium will also include a restaurant and bar 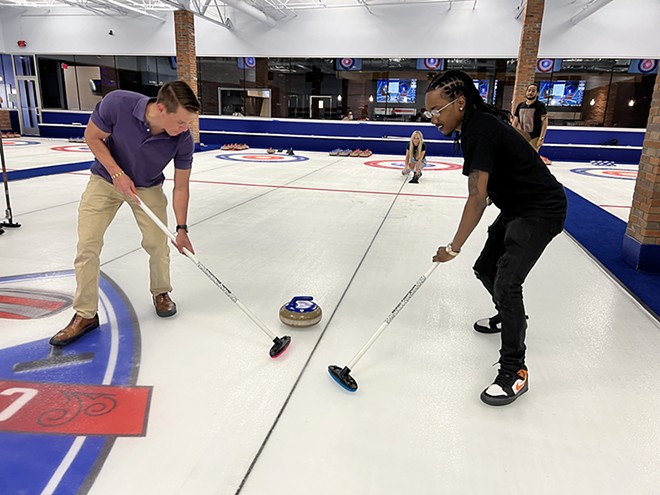 Courtesy photo
Novi's new HUB Stadium is the only place in Michigan where the general public can try curling.

We have to admit, we became absolutely entranced by the strange sport of curling while watching the 2022 Winter Olympics in Beijing, where players slide stones across a sheet of ice toward a target, using tools to guide the stone’s movement by subtly altering the surface of the ice.

Well, now we — and you — can try it out. A new $10 million facility called the HUB Stadium in Novi bills itself as the only place in Michigan for the general public to try curling. While there are other facilities in Michigan that offer curling, those are clubs that require memberships. The HUB Stadium allows walk-ins.

The HUB Stadium also runs a location in Auburn Hills, but the Novi location (located in the former Lucky Strike bowling alley in the Fountain Walk) is the first to offer curling.

The 70,000-square-foot facility includes six curling sheets. It also has 22 ever-trendy ax-throwing stalls, though HUB Stadium uses high-tech projection mapping to make its ax-throwing what it bills as “the first interactive ax-throwing kiosk in the country,” projecting games and scores onto the boards. The facility also includes eight football bowling lanes, as made popular by Detroit’s Fowling Warehouse.

The HUB Stadium will also include a restaurant and bar, dubbed the Concession Stand, that serves what it calls “a travel-influenced menu centered around fire-enhanced cooking and the freshest ingredients.”

The facility opens Monday, May 23. A portion of proceeds from grand opening week will be donated to the Novi Athletic Boosters.

The HUB Stadium is located at 44325 W. 12 Mile Rd., #H-160, in the Twelve Mile Crossing at Fountain Walk. More information is available at novi.thehubstadium.com.

There are three taco festivals coming to metro Detroit