Michigan woman denied chronic pain medication due to cannabis use 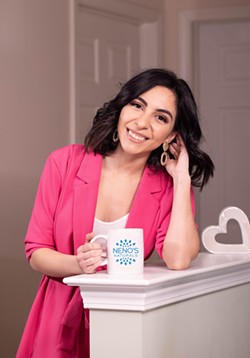 Narmin Jarrous has been using medical cannabis for two years, and has been open about it with her doctor in the Ascension medical system. Over that time she has been able to narrow the use of some drugs to control a painful endometriosis condition down to one. Because of that history, it was quite a surprise to Jarrous recently when she says she was denied a prescription for her one medication because a blood test had detected her marijuana use.

"What happened was I went to my primary care doctor to get a refill for my medication," says Jarrous. "I finished my appointment and then get a call that my doctors won't refill my prescription because I failed a drug test. I was positive for marijuana. ... I'm very open about my use medicinally. It's allowed me to stop taking all my pain medications. "

Apparently, the policy at Ascension is to not treat patients who are using cannabis. It's not clear what that policy is or if it's recently changed because the public relations person from Ascension Providence in Southfield did not respond to phone messages or texts.

A hospital policy that does not recognize medical cannabis use is no surprise. Since medical marijuana was legalized in Michigan in 2008, reports of medical organizations refusing treatment to patients due to their use have been common. Part of the reasoning is that some hospitals are federally licensed or receive federal funds. Because the Drug Enforcement Agency considers marijuana to be a Schedule 1 drug with no accepted medical use, hospital administrators fear running into problems with the government if they engage medical marijuana patients. Some health providers have responded with an outright ban, some look the other way and don't talk about it, and still, others have been accommodating.

"Unfortunately, your doctor can fire you and deny your medicine," says Brandy Zink, chairperson of the Michigan Chapter of Americans for Safe Access, which works to assure safe access to cannabis for therapeutic use and research. "Unfortunately, it's a policy that's prevalent, and it affects a lot of people."

Jarrous, 24, is the chief development officer of Exclusive Brands, an Ann Arbor-based cannabis company doing business across the state. She was able to find another doctor willing to take her as a patient and provide her medication.

"It was very concerning that I was told that I would have to find a new primary care doctor," says Jarrous. "It got me scared for customers that use recreationally and still have to take medication."

The legal stance of federal law would have patients use addictive opioids rather than cannabis.

However, the legal stance of federal law would have patients use addictive opioids rather than cannabis.

"Doctors are afraid of the DEA and opiates are regulated by the DEA," says Zink. "Especially people working in the pain clinic area."

Depending on which way the Biden administration goes on descheduling or rescheduling marijuana, it could have a huge impact on all marijuana users, not just those who need the medicine.

"There's so many patients who aren't good at navigating the system," says Jarrous. "I have so many privileges that helped me to find a doctor so quickly. A lot of cannabis users aren't going to be able to have access to health care because of the blanket prohibition."

Most doctors know little about marijuana because nobody taught it to them at medical school. Or they learned that it was bad, bad, bad. Even many open-minded doctors are deterred from engaging with it by the institutions they work for. Medical use is still a big part of marijuana's place in society even though recreational use has a wider allure. As recreational cannabis use continues to grow, there clearly needs to be some accommodation between marijuana and the medical establishment other than prohibition.