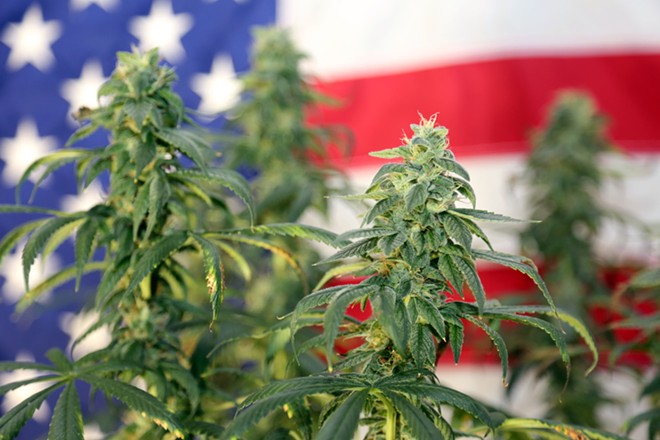 Amid the anxiety of the 2020 election, it looks like a lot of metro Detroiters are turning to weed for an escape.

Jerry Millen, owner and founder of the marijuana dispensary Greenhouse of Walled Lake, says he's seen his sales rise about 50% over the past week as compared to the previous 60 days.

"We really saw it on Election Day," Millen tells Metro Times. "And then we really saw it again (the next day), because people are just — I mean, I can't even watch this, it's so stressful."

With a number of states still counting their absentee ballots, and the margins between President Donald Trump and challenger Joe Biden razor-thin in some cases, the 2020 election has turned into a protracted contest that has both Democrats and Republicans feeling on the edge. So it's no wonder, perhaps, that people are turning to cannabis for some relief.

"Normally, I think people turn to alcohol or prescription drugs, Xanax, all that stuff," Millen says. "I think with the rise in cannabis use, you're starting to see a lot of people that drink now use cannabis in place of alcohol."

Plus, you don't get hangovers from weed.

"You know, as we get older, the next morning after you drink, you don't feel so hot," Millen says. "When I was 20, I could party with the best of them. Now that I'm an older man now with kids and everything, drinking the night before, the next morning, I feel like crap. With weed, it's not like that at all."

Millen says there are a number of products now that are geared toward microdosing, or getting the benefits of cannabis without getting super high. Aside from CBD products, which don't contain THC, the psychoactive component of cannabis, there are also products like You Mist, a 1:1 spray that gives you a lighter dose. He also sells a transdermal patch that slow-releases over the course of the day.

Beyond that, Millen recommends avoiding sativa strains, which can make people feel paranoid if they're already amped up. He recommends indica or hybrid strains, or using CBD to cut them down.

"Overall, we anticipated a lift this week since it's such an uncertain time, and we're glad we could be there for consumers when they needed it," she says.

Beyond metro Detroit, in Hanover, From the Earth dispensary says it saw an increase in sales on Election Day and the day after. A spokesman says most consumers were buying more product than usual and they saw an increase of about 25% per transaction.

While it looks like the presidential election has been decided, President Trump has yet to concede, alleging, without evidence, widespread fraud.

"It looks like it could go on for weeks, you know?" Millen says. "Hopefully people can find some relief with cannabis."