Many senior citizens are settling into a THC-infused retirement 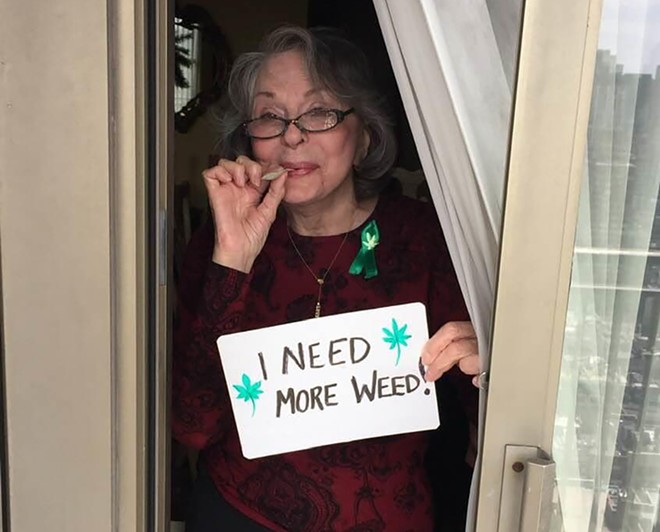 Arlene Williams/Facebook
Cannabis activist Arlene Williams, 84, who grew up in Detroit, has traveled the world advocating for drug reform.

When it comes to cannabis, the progression to acceptance has been a long one. Baby Boomers, children of the Silent Generation, were warned of the effects of marijuana use from histrionic movies like 1936’s Reefer Madness and 1949’s Wild Weed. These films focused on addiction and mental health crises if you dared smoke the “green stuff.” But now that cannabis use is legal and normalized throughout much of the country, many adults are now settling into a THC-infused retirement.

Mechanic Recardo Simmons, 67, had his first experience with weed on a basketball court in Detroit. An older teenager fired up a joint attempting to pass it along to Simmons, who didn’t know what it was at first.

“I looked at it, and the guy asked me, ‘Oh, you scared?’” Simmons says. Once he realized it wasn’t a cigarette, he declined the offer and said, “This is straight up dope.”

Cannabis has long been labeled as a gateway drug. But a couple of years later Simmons would smoke occasionally with his friends after discovering it wasn’t that bad after all. “It wasn’t heroin,” he says.

After research pointed to health benefits of cannabis and voters in states like Michigan began legalizing it for medicinal use, stigma of the plant dissipated.

Rebekka Page, owner of CB Squared Smoke and Vape Shop on Detroit’s west side, is a medical marijuna grower for her senior clients. A cancer survivor with a background in nursing, Page believes cannabis helped improve her symptoms. “This is the reason I chose to pursue the industry,” she says.

Over the past three years, Page, 44, noticed an increase in retirement-age cannabis users. She cultivates 72 plants for five of her patients, who she says like the “lift THC gives them,’” which helps their chronic pain and sleep issues. A 2020 study in JAMA Internal Medicine found that cannabis use in the past year by U.S. adults 65 years and older increased sharply from 0.4% in 2006 and 2007 to 2.9% in 2015 and 2016.

According to a 2018 study published in the peer-reviewed Gerontology and Geriatric Medicine, most U.S. adults age 50 or older who had used cannabis in the past year (75%) said they felt there was a slight risk or no risk to toking once or twice a week.

“Marijuana use seems normalized among older populations as more of those who ever used marijuana age, as laws legalizing marijuana spread across the United States,” the authors wrote, while noting that more research is necessary into the impact of cannabis use on the health of aging adults. (Scientific studies on the health effects of cannabis are limited due to its federal schedule one drug classification.)

A 74-year-old retired business owner who called himself an advocate of the cannabis product Rick Simpson Oil, which some claim has the potential to help treat cancer, says he used to hear pot referred to as the “Devil’s Weed.” Now that the plant is legal, he says, “People are more free to admit that they use marijuna.”

He adds, “You get old enough and you say, ‘Oh, you know all that was bumpkin.’”

Joe “Top Dog” Price, a 71-year-old client of CB Squared, says he was told marijuna will make you lazy and mess with your mind when he was younger. While Price doesn’t think teenagers should smoke weed, he says he doesn’t care how people react to him smoking. “I’m 71!” he says.

In the ’60s, Simmons grew up with hippies, hanging out at the Eastown Theatre, where acts like Pink Floyd and Fleetwood Mac performed. Simmons recalls sitting on the floor watching rock concerts with friends.

“All these same people who were the hippies then developed into what we call the ‘yuppies’ 20 years ago,” Simmons says. “Now for them, marajuana is OK, and there’s so much money involved in it now — you growing it, you selling it, whatever else.”

As cannabis becomes legal in more states, more people are being open about their use, including senior-citizen social media influencers — like the Dabbing Granny, who shares her green adventures with her 1.2 million Instagram followers, helping new users find their way.

Cannabis activist Arlene Williams, 85, has traveled the world advocating for drug reform, while also seeking out the best remedies in cannabis wellness.

Growing up in Detroit, Williams says her parents whispered among themselves about “wacky cigarettes” and the scandal of actor Robert Mitchum being arrested for cannabis possession. Williams knew there was a stigma around using marajuana, but once she was out of her parents home, married at age 17, she suggested to her husband she wanted to try some.

“He thought I was absolutely insane,” says Williams, who is now based in New York, but adds that he went along with it.

“That is how I started smoking, but it was never a big part of our lives,” she says. “It was something we did on New Year’s and on birthdays.”

Williams says many elders feel free to inhale, digest, and consume cannabis openly without shame in their golden years.

“I don’t want to trivialize a war that’s going on in Ukraine or anywhere, but rather then drop bombs, let’s just drop a load of reefer and just chill out,” she says.

Toke on, aging ones.