According to the Belle Isle Conservancy, it’s the only public aquarium in Michigan to have one 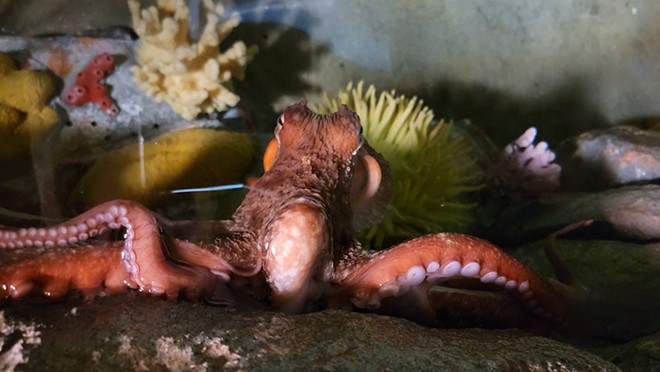 Courtesy photo
The Belle Isle Aquarium's new octopus doesn't have a name yet.

The oldest aquarium in the country has a new eight-legged resident.

Detroit’s Albert Kahn-designed Belle Isle Aquarium celebrated its 10th anniversary since reopening and its 118th birthday on Thursday by unveiling its new octopus tank. According to the Belle Isle Conservancy, it’s the only public aquarium in Michigan to have one.

Belle Isle Aquarium director Summer Ritner said guests have shown a lot of interest in the creatures over the years.

“Guests continually ask if we have an octopus at the Aquarium,” she said in a statement. “I’m sure this addition will become a favorite of visitors and school groups for years to come.”

The octopus doesn’t have a name yet. Over the next week, guests can submit name ideas on the Belle Isle Conservancy Instagram account, @belleisleaquarium. (According to a publicist, the octopus is a boy.)

The tank was donated by Jon Cotton, who said he was inspired by visiting the Houston Zoo as a child.

This year, the aquarium also welcomed new additions including garden eels and the endangered axolotl, a Mexican salamander.

The Belle Isle Aquarium is open from 10 a.m.-4 p.m. Friday-Sunday. Admission is free. More information is available at belleisleconservancy.org.