(Hopefully for real, for real this time) 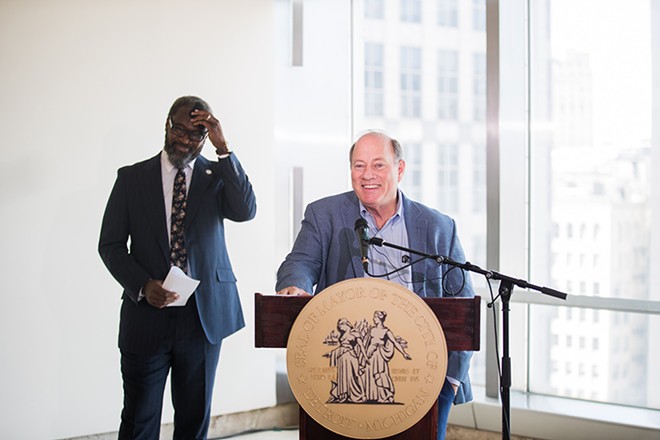 Detroit’s back-and-forth fiasco over recreational cannabis could finally be over now that a judge dismissed two lawsuits challenging the city’s latest adult-use marijuana ordinance on Tuesday.

At a Wednesday press conference, Mayor Mike Duggan said the city was now “on the verge” of allowing adult-use cannabis businesses. It will begin accepting applications for licenses at 8 a.m. on Thursday, Sept. 1, what Duggan called a “historic day.” The application process will be open for a month.

“Every single person is entitled to start applying tomorrow, but we are going to make sure that there is equity,” Duggan said.

The creation of the cannabis ordinance was helmed by Detroit City Council President Pro Term James Tate, who Duggan praised on Wednesday.

“I stood here with Councilman Tate almost three years ago, and he predicted that the fight to have inclusion and equity in the marijuana business was going to be a hard fight,” Duggan said. “And when I stood here, I listened to him say, ‘We are going to fight this fight till hell freezes over, and after that we’re going to fight on the ice.’ Well, Councilman Tate was prescient because right now we’re fighting on the ice. But with the court rulings yesterday dismissing these cases, we’re fighting and we’re starting to win on the ice.”

This is Detroit’s second go at trying to legalize recreational pot. The new ordinance was approved in April after the first try was tabled after a federal judge deemed the social equity provisions “likely unconstitutional.” Under the original proposal, long-time city residents would have been given priority in licensing. The new ordinance avoids that by setting aside social equity licenses to “equity” and “non-equity” applicants aren’t competing.

“The judge came back yesterday and not only said that we were fair, but we were right,” Tate said.

He added, “I am excited at the fact that we are on the verge of having Detroiters and other equity applicants in the city of Detroit having a fair process that will allow them to participate in this multimillion-dollar industry. It is complicated, it is challenging, but it is now possible, and that’s the beauty of this fight that we have gone into.”

Cannabis companies JARS Cannabis and House of Dank filed lawsuits against the city that halted recreational cannabis applications. The city was set to start accepting those applications on Aug. 1.

Both suits took issue with the social equity provisions, in addition to a provision that they allege prevents existing medical dispensaries from applying for adult-use licenses until 2027. But Wayne County Circuit Judge Leslie Kim Smith ruled Tuesday that the ordinance does not give preferential treatment to equity applicants since non-equity applicants can apply at the same time, and both groups are limited to 50 licenses.

“[Whether] or not they are deemed equity applicants, they are still afforded the opportunity to compete for one of the 50 licenses available in each category,” the judge wrote.

JARS alleged the ordinance violates state law, but Smith said the law does not limit a municipality from developing its own scoring system and criteria for applicants.

“Although the city’s 2022 marijuana ordinance is a complicated scheme, it is unambiguous and provides a fair licensing process,” Smith wrote in a decision on House of Dank’s lawsuit.

Meanwhile, applications for unlimited licenses, which include businesses like recreational grow facilities and transporters, have been processed since April.

Michigan voters approved adult-use cannabis sales in 2018, and communities across the state have since allowed dispensaries to open and sell to anyone age 21 or older as long as the communities chose to opt-in.

Adult-use cannabis sales have been a boon to these communities thanks to the tax dollars they generate. But in the time that Detroit has struggled to pass its own adult-use ordinance, cannabis operators have multiplied across the state, bringing the price of cannabis down and causing downsizing in the nascent industry.