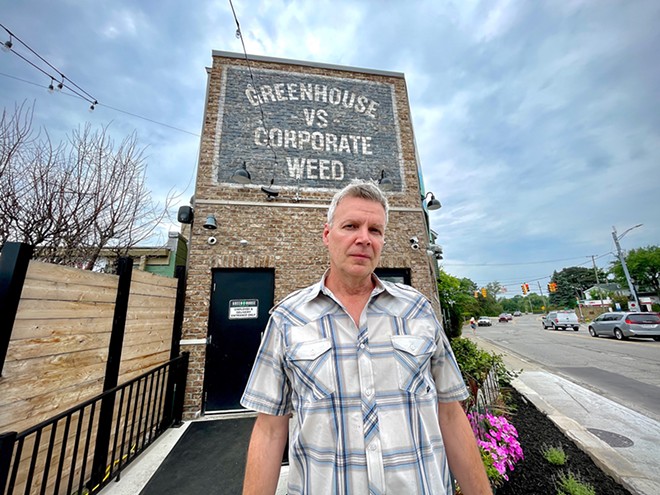 Frank Marra, Greenhouse Of Walled Lake
Greenhouse of Walled Lake owner Jerry Millen stands in front of a mural on his dispensary that reads, “Greenhouse vs. Corporate Weed.”

Prices for legal marijuana have hit all-time lows in Michigan, even as inflation is driving up the costs of most other products, like gas and food.

For now, the trend is great for cannabis consumers, who can find deals on flower, edibles, and concentrates that are comparable or better than what’s on the black market.

But for small growers and dispensaries, the plummeting prices are making it difficult to stay afloat.

The average price for an ounce of recreational flower dropped from more than $512 in January 2020 to $131 in May, a 74.4% decline, according to the Michigan Cannabis Regulatory Agency.

During the same period, an ounce of medical flower dropped from $267 to $117.

The market is oversaturated with marijuana. There are more than 1,000 dispensaries in Michigan, and nearly half of them sell recreational cannabis.

To compete, dispensaries have been steadily decreasing their prices since recreational sales became legal in December 2019.

And that means cultivators are getting less and less for their products.

When Mark Marion first opened his small grow business Med+IQ Pharm to Pharm in Kawkawlin Township in March 2021, he was charging dispensaries about $2,800 a pound. Now, some dispensaries expect to pay less than $1,000 a pound, which barely covers the cost of production.

“We have our overhead like everyone else,” Marion tells Metro Times. “License fees, taxes, power, infrastructure — it’s outrageous.”

Marion says large companies are running down the price. He likens the price squeeze to Lowe’s and Home Depot underselling local hardware stores.

“The smaller shops are getting hammered,” Marion says. “All the bigger ones want to do is push out as much flower as they can. We want to make sure we produce good flower, and they are running everything down.”

Med+IQ Pharm to Pharm produces 10 different strains and up to 120 pounds a month. By comparison, some of the bigger cultivators produce more than 10 times that amount.

For growers like Med+IQ Pharm to Pharm, price isn’t everything. Marion’s son works at the grow facility 15 hours a day to ensure the highest quality product, he says.

“There’s nothing that goes on here that he doesn’t know about,” Marion says. “Our focus is on good quality flower.”

Smaller grow operations like Med+IQ Pharm to Pharm depend on dispensaries that value local businesses and high quality flower.

One of those dispensaries is the Greenhouse of Walled Lake, which prides itself on its local roots. On the side of its building is a mural that reads, “Greenhouse vs. Corporate Weed.”

Owner Jerry Millen says he prefers smaller growers, even if the prices are higher.

“I’m trying to help the mom and pop owners,” he tells Metro Times. “I’m paying some of them more than I can get from other places.”

Millen worries that the plummeting prices are going to force smaller dispensaries and growers out of business.

“The big guys are trying to crush the little guy,” Millen says. “They have the money to do it. What happens when the little guys are pushed out? Do the prices go back up?”

Millen says the trick to staying competitive is keeping customers happy by offering a unique experience with plenty of specials, giveaways, and consistently high quality products. It means going beyond cannabis, he explains. Millen plans to sell doughnuts and coffee out of an enormous old truck he recently purchased. He’s also considering hosting concerts and poetry readings, as well as cannabis education nights.

“You have to find a niche and find a way to keep customers happy,” Millen says. “I want to be the Samuel Adams of cannabis. I don’t want to be the Budweiser.”

On an average day, the Greenhouse serves between 1,100 and 1,600 customers. But those customers are spending less each visit.

The goal, he says, is to remain vigilant because it’s a cutthroat business.

“The big guys are coming for us. I’ll put up a hell of a fight.”

Taking a bite out of edibles

In March, a company called Ripple opened an 8,000-square-foot manufacturing and processing facility in Dimondale near Lansing to produce quick-acting edibles.

Since then, the small company has lowered its prices by a third.

The price drops are “affecting not just cultivators and retailers, but everyone in the food chain that is cannabis,” Rachel Reed, Michigan sales director for Ripple, tells Metro Times. “It’s wild.”

Amid the heated competition, Ripple’s products continue to stand out because they’re unique, Reed says.

The products are water-soluble, and the company touts studies that show a measurable amount of THC enters the bloodstream within 10 minutes, compared to 30 minutes to two hours from fat-soluble products sold by other companies.

Reed says she can’t imagine prices getting much lower. If the prices don’t rebound soon, the big companies have the advantage, she says.

“They have the deep pockets to ride this out, but unfortunately a lot of the homegrown, local guys are really feeling the crunch and that sucks,” Reed says.

For now, though, there’s one clear winner in the industry.

“If you’re a Michigan cannabis consumer, it is a great time to be alive because you have desperate retailers,” Reed says.