This is how Detroit’s City Clerk candidates would improve elections 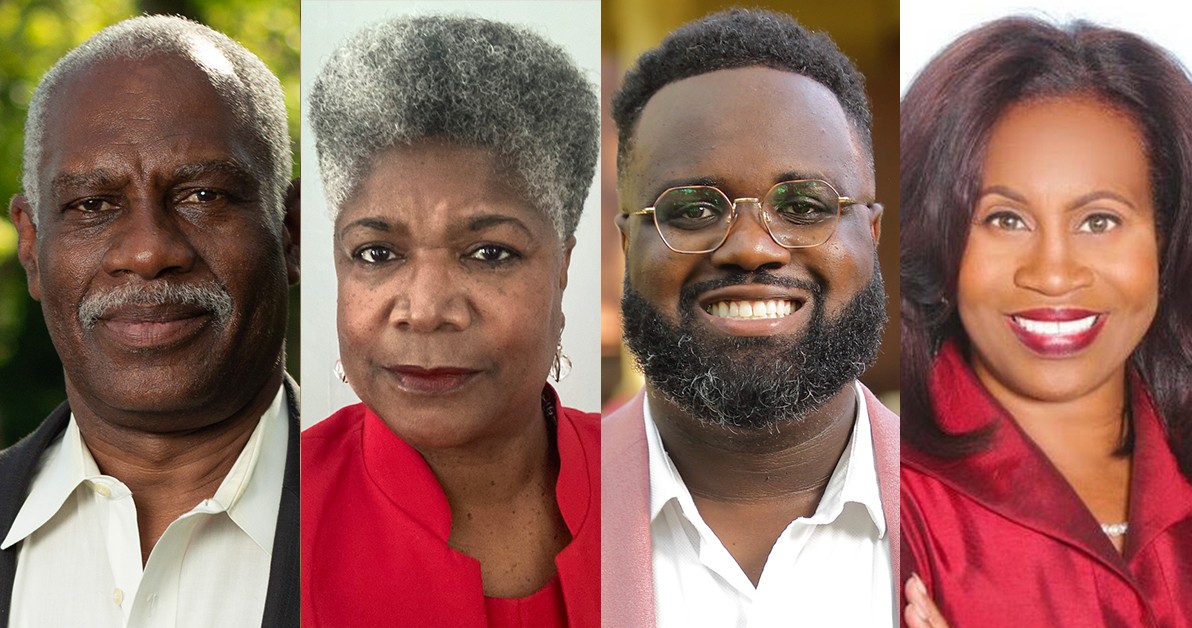 On the one hand, Republican lawmakers across the country, gripping onto former President Donald Trump's "Big Lie" that the election was stolen, are pushing legislation under the guise of "voter integrity" that critics say is actually voter suppression meant to make the next election easier to steal and preserve GOP power. On the other hand, cities like Detroit have elections that are marred by inconsistencies and other glitches. While the candidates below do not believe there was voter fraud in Detroit, they believe its elections can be improved. Here are the candidates trying to unseat incumbent City Clerk Janice Winfrey.

Of Detroit's elections, Kindle-Walker says, "The main problem is the lack of ability to correctly count and reconcile the absentee ballots and county boards with the books. This happened consistently, year after year, election after election, and it's getting worse." Kindle-Walker calls for overhauling Detroit's election system so that votes are reconciled on an hourly basis.

"The problem with Detroit and the county in reconciling is there's not enough time to do that," she says. "So number one, if we had the ability to begin the process of counting and certifying the absentee count before election day — as in getting all of the signatures to match the envelope, and that's without even opening them was to start the count — if we had more time to even do that part, that affects our overall turnaround time because you don't have enough time to report out at hopefully the end of the day or at a reasonable hour of your totals."

She also calls for the city to provide accurate information to voters about elections and candidates. "We don't have to have an opinion on issues, just let people know what's on the ballot, the candidates that are on the ballot, the exact correct date, exact correct procedures of how to get an absentee ballot application and ballot, where to vote, early voting locations, simple information," she says."Many ex-offenders don't know that they can indeed vote in the state of Michigan. This standard information should be consistently given out so we can create a climate of expectation that, yes, OK, I'm able to exercise my civic duty because I'm armed with information. That is not happening consistently."

A Detroit native, Denzel McCampbell has extensive experience in elections, serving as part of an early planning group for the effort that turned into Promote the Vote in 2018 and working as a nonpartisan election protector, reporting problems at the voting precincts to election officials. He also served on the Detroit Charter Revision Commission, and currently serves as a communications director for U.S. Congresswoman Rashida Tlaib. "I know election law," he tells Metro Times. "I know the nitty-gritty of setting up polling locations and ensuring folks have accurate information." He adds, "I'm running for Detroit City Clerk because we really have to do better when it comes to civic engagement, we have to do better when it comes to ensuring our residents know that there is actually the election coming up. ... We have the resources, we have the knowledge here in the city of Detroit to run elections efficiently and ensure that we're doing engagement education."

Of the Republican efforts, McCampbell says, "What we're seeing here in Michigan and Lansing with the 39-bill package, we have to be clear that they're not really calling for election integrity ... they're calling for voter suppression and really to erode [voting] rights of Black and brown folks because they're upset that Trump lost, or they don't believe that Trump lost, even though there wasn't any voter fraud."

He adds, "I'm not saying that there's fraud in the system ... What I'm saying is that we can be doing things better. We can increase transparency in the process, we can make sure that folks know about the various processes ... make sure that we do have robust training, so that no one is denied their right to vote, so that we do have transparency so that folks actually trust elections. With the Republicans and this effort that we're seeing, it's not really to improve our system; it's actually to sow distrust in our voting system and in our elections so that it decreases turnout."

McCampbell says he's talking to Detroiters and finding out that there is still much confusion about the absentee voting process, which many Detroit voters might choose to use due to the ongoing pandemic. Some told him they requested absentee voter ballots, but the clerk's office has not logged them. He also calls for better messaging from the clerk's office about upcoming elections.

"As clerk, I'll take a look at every aspect of elections ... making sure that we have enough materials, but also that we're implementing contingency plans, like, 'A through Z are if this happens, if this machine fails,'" he says. "If we run out of pens, how do we ensure that we have enough of those materials and that we have the processes in place to immediately get those things to the polling location so that no one is inconvenienced." He also calls for extensive training for all poll workers and an increase in civic education for Detroiters. He says he would invite city stakeholders to the clerk's office for feedback. "We need to create that feedback loop with the community because, right now, I don't feel that we have a city clerk that is really in the community," he says. "Then we create a program that will actually go door-to-door and hold community forums and work with those stakeholders [on] the issues that are important to them, and connecting how the government — and especially our civil government — has a role in those issues."

He adds, "The clerk is the record keeper of the city, and this goes with City Council agendas and making sure that the votes are tallied and recorded. But you know, right now, you can't even go online to see how your city council representative voted ... we spent millions of dollars on IT upgrades. It doesn't take much more to have a Google Doc on the website that says here's agenda items, and here's how your City Council person voted. I just watched the L.A. City Council meeting and in real time they have on the screen how they voted, if you're watching online there. We can do this live on city channels, as well. We need to increase transparency, we need to increase the access to information. And that's how we're going to do that in the City Clerk's office if I'm elected."

Michael Stephen Ri'chard was born and raised in the city of Detroit and worked in the City of Detroit Department of Elections as a senior training specialist for more than six and a half years, hiring and training more than 1,000 Election Day poll workers. He also served as director of community affairs, legislative affairs aide, and community liaison for former Congressman John Conyers, Jr., former Congresswoman/City Councilwoman Barbara Rose Collins, the late Wayne County Commissioner Jewel Ware, and former Detroit City Clerk Jackie Currie. Currently, he is a legislative aide to Wayne County Commissioner Monique Baker McCormick.

"In the November 2020 election, we experienced one of the most historic elections in our lifetime for generations to come," he says. "However, in August 2020, the Detroit Department of Elections was in the national spotlight for the third time in 16 years due to incompetence, inaccurate vote totals, equipment failures, and errors at many precincts." He says those errors, along with "the lack of proper training, old or non-existent poll material, and a lack of locations to submit your ballot put Detroit's November election in jeopardy."

According to Ri'chard, in the August primary, "roughly 72% of the city's 503 precincts recorded unexplained discrepancies between the number of ballots counted and the number of ballots recorded, while 70% of the city's 134 absentee voter counting boards tasked with counting absentee ballots for multiple precincts were out of balance." He adds, bluntly, "That disenfranchises voters. ... There are serious problems in the Detroit Department of Elections, and I am the person to fix them."

Ri'chard says if elected clerk, "I will from the top down evaluate staff and make sure that all election staff are professionally trained by myself and the State of Michigan so that Detroit election trainers can properly train and supervise poll worker staff." He adds, "I will make sure that all staff and poll workers have the most up-to-date election material. I shall make sure that Detroit has an adequate number of drop boxes and mini polling centers for voters to drop off their ballots and vote from for early voters. I will make sure that voters know in time where the new polling places are in case their old polling place is closed. I will have prompt and accurate voting tabulations."

Janice Winfrey has served as Detroit's city clerk since 2006, and has also served as clerk for Detroit City Council, archivist and chief elections officer for Detroit, oversaw and managed the overall fiscal and administrative operations and budgets for the Office of the City Clerk, Archives, Records Management Division and the Department of Elections, and administers the official City of Detroit oaths and affidavits, among other duties. She was also a math specialist with Detroit Public Schools.

Of Detroit's elections, Winfrey says, "One of the problems in the administration of elections is technology has not kept up with the continuously evolving laws." For example, 2018's Proposition 3 enabled no-reason absentee voting — "which is awesome," she says. "However, as we saw with the 2020 presidential election, more than 174,000 electors voted by absentee ballot (66% of the entire voter turnout). Keeping up with the volume of requests received daily was taxing and primarily dependent on manual labor." Winfrey says she is seeking additional funding to add technology to improve the absentee voting operation.

Of the Republicans' multi-bills election legislation, Winfrey says, if adopted, it "would not only place additional administrative burdens on election administrators not just in Detroit, but also all over the state. The standards of requesting an absentee ballot by the voter, if bills are adopted, will require them to provide either a copy of their driver's license or the last four digits of their social security number. These laws are solutions to problems that do not exist."

Winfrey points to a Michigan Senate report that found there was no fraud in the 2020 election. "Being the case, these bills should be null and void," she says. She adds, "It's not only an attempt to suppress the vote in Detroit, but it's also an attempt to minimize voter turnout in all urban communities in Michigan. These bills have little impact on the administrative process and it places tremendous burdens on the electorate."

Winfrey says the discrepancies in precinct and county boards are a unique problem to Michigan. "This issue never plagues other states throughout the country," she says. "It is problematic for Michigan election administrators because our state has laws that are not respecting of human error."

If re-elected, Winfrey says she will create more ways that Detroiters can vote and "continue the fight against and all attempts to suppress voting in Detroit."

Part of our Detroit 2021 primary guide.