Queen Elizabeth II was the most effective monarch in British history because she oversaw its greatest decolonization. The only way to build on her legacy is to end the monarchy she served. 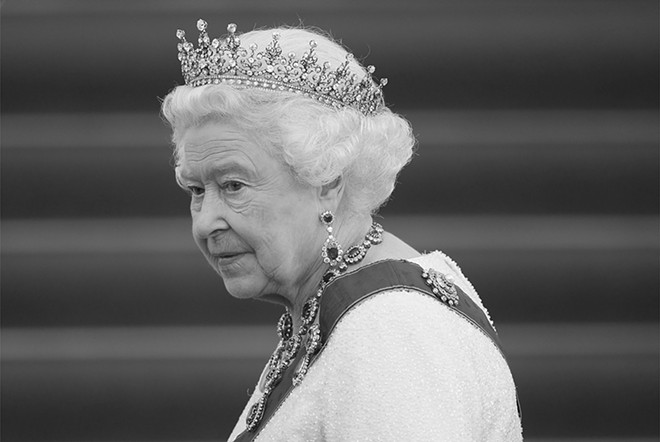 Shutterstock
Over her 70-year reign, Queen Elizabeth II would oversee the decolonization of many African countries — which is why her reign is the most successful in Britain's history.

In 1956, Egyptian President Gamal Abdel Nasser nationalized the Suez Canal. In doing so, he directly violated the terms of the agreement to end British colonization of Egypt, which would have left the British in control of Egypt’s most valuable resource until 1968.

Under the direction of Prime Minister Anthony Eden, Britain retaliated swiftly, conspiring with France and Israel to invade Egypt, retake the canal, and sack Abdel Nasser in a coup. They were ultimately thwarted. The U.S. and USSR opposed the maneuver, threatening economic action against the British. In the end, it was Eden, not Abdel Nasser, who was sacked.

So ended Great Britain's 74-year occupation of my ancestral homeland under a queen only four years into her reign. Several sources have reported that Queen Elizabeth II opposed the invasion from the jump, calling Eden “mad.”

Egypt was just the beginning. Over her 70-year reign, the queen would oversee the decolonization of many more African countries. And that’s why her reign, not by standards of the crown or even her own, but by the standards of justice, is the most successful reign of any British monarch in imperial history. Properly honoring her legacy would mean ending the institution of British monarchy itself.

As we grapple with the passing of Britain’s longest-serving monarch, it’s worth disaggregating the person from the personnage. The personnage was of a monarch — the living embodiment of the history and legacy of one of the world’s most ruthless, expansive global empires. Make no mistake, the British crown is a parasitic anachronism.

Though hers was the head that wore it, Elizabeth — the person — was not the crown itself. A generous interpretation of the legacy of Elizabeth, the person, is that she was thrust into a role by the situation of her birth and the choices of men in her family (her uncle abdicated in order to marry an American divorcee). A less generous interpretation would highlight her failure to stand up to the institution she represented, she embodied, and the countless assaults on human dignity it perpetrated under her reign.

Though hers was the head that wore it, Elizabeth — the person — was not the crown itself.

Whether you put your emphasis on “Queen” or “Elizabeth,” she has passed. In the seven decades during which she wore the crown, the world changed. For those decades, as the crown itself retreated from the world stage, she emerged as the singular shield that guarded against its apoptosis. Her constancy allowed us to forget everything her crown represented. Now that its final shield has gone, we must subject the institution to the harsh light of 21st century reality.

Beyond the United Kingdom, the British “Commonwealth” currently comprises 14 former colonies. They include Australia, Canada, Jamaica, Grenada, Papua New Guinea, Antigua and Barbuda, among others. In each, the British monarch is head of state. Many of these countries are predominantly Black. Calls for formal reparations from the U.K. are growing — even beyond the Commonwealth. Personally, it was particularly galling to have a docent at the British Museum ask if I wanted to learn about Egypt when the articles on exhibit were pilfered from my ancestral homeland and should never have been there in the first place. Little on display, in fact, was actually “British.” More directly, the most famous crown jewel, the Kohinoor diamond, was wrenched from India.

Jamaica has already announced plans to leave the Commonwealth. Australia is likely to follow suit. But what of the United Kingdom itself? Following the disastrous Brexit decision, Scottish First Minister Nicola Sturgeon called for a second referendum on seceding from the U.K. (the first failed by 10 points in 2014), though there has yet to be any agreement with the U.K. prime minister. No doubt, the calls will grow louder after a suitable cooling off period following the funeral.

Even beyond Scottish secession, even the English themselves should be asking broader questions about the continued value of the monarchy. What value does the monarchy serve? Whom does it benefit beyond a handful of royals? What can it possibly stand for that abrogates the evil it has perpetrated on so many?

Queen Elizabeth II was the U.K.’s most successful monarch because she oversaw the broadest deconstruction of the British empire in history. Building on that progress may be incongruent with the existence of the monarchy itself. So it happens that perhaps the most fitting recognition of Elizabeth might be putting an end to the crown she wore.

Originally published Sept. 13 in The Incision. Get more at abdulelsayed.substack.com.