The Metro Times has received several e-mails and phone calls from readers who take us to task for the comic book treatment we gave Kwame Kilpatrick, aka Kwame-man. You can read some of the letters Wednesday when this week’s paper hits the stands and the letters are posted to the Web. The general theme is that we’re racists for the over-the-top caricature of our ex-mayor and would never treat a white person with such disrespect.

Is racism something that exists only in the eye of the beholder? No, but for those who have spent their lives dealing with the effects of racism, sensitivity to it is far greater than it is for those who haven’t had to endure it day in and day out.

So, it is easy to understand why some of our readers were offended — maybe even outraged — by the comic-style depiction of an African-American who held a position of considerable power. It’s not like we didn’t consider the negative reaction our comic-book Kwame would generate. But we also felt that, given the disdain with which he has treated this city, he was more than fair game. That is a debatable point. Hell, we debated it ourselves before making the decision to run with it. And that’s one reason we consider the letters page — and the new comments feature on our Web site — important. Those are spaces where readers can join the debates we’ve often had among ourselves and initiate new ones.

But those readers who say we wouldn’t do the same sort of thing to a white guy are wrong. We once had a cover illustration depicting then-Gov. John Engler as a dancing pig. We also ran a caricature of an obviously drunk, martini-swilling Oakland County Executive L. Brooks Patterson being pulled over by a traffic cop. One of my favorites is a cover of wasted-looking Kid Rock nestled between a pair of giant tits with a headline that read “Boobs of the Year.” That’s showbiz, you say? OK, let’s get back to politics. Another time we pasted a picture of U.S. Rep. Joe Knollenberg’s face inside a toilet lid. And we depicted George Bush as a crazy cowboy riding a nuclear bomb a la Slim Pickens in Dr. Strangelove as the cover art for a story about his possible plans to attack Iran.

So, go ahead and criticize us for having an abundance of bad taste, and for failing to show due respect to elected officials and big-name celebs. We freely admit to taking satirical pokes at the high and mighty. But when it comes to accusations that we’re racists just because we also lampooned a black mayor, we plead not guilty. —Curt Guyette, news editor 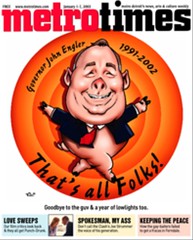 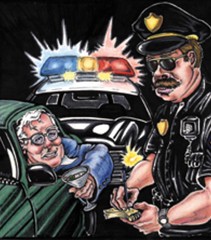