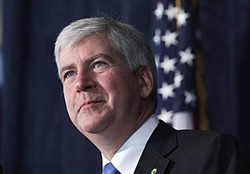 We really weren't that surprised when we heard that the Snyder administration had decided to fight a federal court order to deliver bottled water to Flint residents who needed it. He's just doing what he was elected to do: run government like a business.

For instance, let's say a federal court judge orders a corporation to take actions to ameliorate the misery it has caused its customers with a faulty product. What does the business do, seeing a potential threat to its bottom line? It fights the ruling, of course, employing legal maneuvers to tie the matter up in court for years if necessary, while the screwed-over consumers continue to bear the costs of the company's mistakes.

Still, it soured us a little, especially after we took special effort last week to show the myriad ways in which Gov. Snyder cares about the health and well-being of Michiganders.

Deep down inside, though, we know the big guys really does care. And he will help more. He said so.

“Obviously, I care,” Snyder had said to The Detroit News earlier this year. He had said, "We’ve done a number of actions. We’re going to keep working on putting solutions in place." He added, "Let’s focus in on the solution and how to deal with the damage that was done and help the citizens of Flint and make Flint a stronger community.”

As for the residents of Flint, whose taps pour out hot and cold running crud for the third year now, well, we suppose we can forgive them if they see Rick Snyder less as the problem-solving technocrat and more like Mars Chief Administrator Vilos Cohaagen in the 1990 film Total Recall.