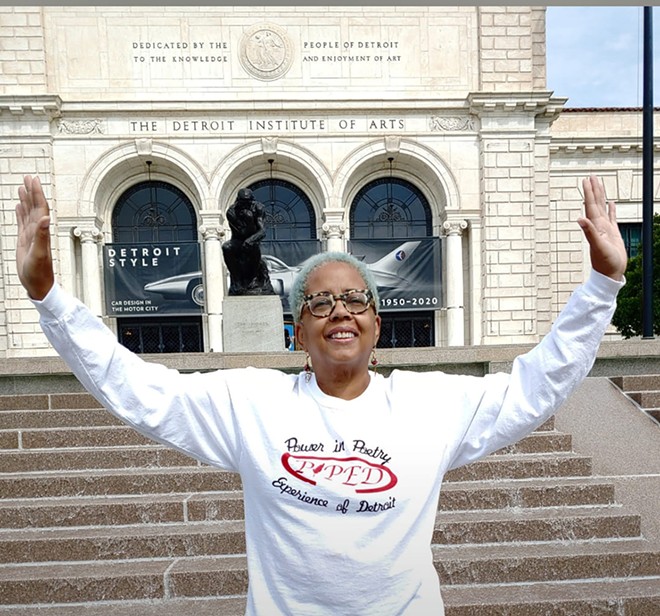 Facebook, Debra Walker
Debra Walker stands in front of the DIA, where she volunteered.

Detroiters are mourning the death of Debra Walker, a longtime Corktown resident and booster who died last week. She was 69.

According to Tim McKay, a friend of more than 20 years, Walker died Wednesday, Nov. 23, of heart complications that followed her treatment for breast cancer. She is survived by her daughters Lisa and Lauren, and Lauren’s three sons, Gabriel, TJ, and Ayo.

McKay says he was her neighbor in a building built in 1906.

“Her heart was really active in Corktown,” McKay tells Metro Times. “There’s a lot of changes happening in Corktown, and she sort of monitored what was going on and how people were affected — just a real serious concern for the wellness of the neighborhood, and keeping it historic.”

Detroit’s oldest neighborhood has seen many changes over the years, with the former Tiger Stadium closing and hip new restaurants, bars, and apartments cropping up — as well as Ford Motor Co.’s forthcoming $950 million investment to transform the former Michigan Central Station into a new campus. Walker wanted to make sure the community did not lose its character amid these developments, McKay says.

“She held tight to the core of what Corktown is,” McKay says. “It’s not high-end … it’s about the worker.”

According to Walker’s bio on the page for the Friends of Historic Hamtramck Stadium, where she served as a board member, she graduated from Wayne State University with a Bachelor of Science in English. She retired from a career in quality control at the former Daimler-Chrysler in 2007 due to health conditions, but soon became active as a volunteer in AmeriCorps.

Eventually, Walker moved to Corktown after opening and operating the former Ladel’s Books with her daughter near the former Eph McNally’s deli. When Eph McNally’s abruptly closed, worker Greg Mudge took over in 2008, renaming it Mudgie’s. When Ladel’s Books closed, its building was incorporated into the Mudgie’s complex with Walker’s encouragement.

“They became dear friends,” McKay says. “She really encouraged him to keep going and doing it.”

Mudge died last year at age 46. “His passing was definitely an emotional time for her,” McKay says. In recent months, as president of the East End Corktown Block Club, Walker had been working to rename the corner of Brooklyn and Porter Streets to “Greg Mudge Street” in honor of her friend, where a park that Mudge helped clean up and maintain now sits.

Walker also served on the boards for the Corktown Business Association, the Corktown Experience, Alternatives for Girls, the Peoples Community Services, Corktown Economic Development Corporation, and the Detroit Pre-College Engineering Program. She was appointed by Detroit City Council to serve on the Board of Zoning Appeals, and volunteered with the Detroit Parade Co., the Detroit Institute of Arts, and Friends School of Detroit.

McKay says that despite her many passions, Walker always remained cool and collected.

“You could tell, in a mild way, that she was having a great time,” he says. “She didn’t ever get into a crossfire of conversation if there was a disagreement amongst people, and maybe she could have been brought into it. She didn’t go there ... and I do believe that’s probably from her corporate experience, and contributed to her success in the [corporate world].”

Walker was also known for giving poetry readings, as well as her collection of what McKay estimates are “hundreds” of toy giraffes. She was also a lifelong learner, and in recent years started learning to play the piano.

She never let her health conditions get in her way, McKay says.

“We have what was a former parking lot that has just been grown into a yard, and she would take her grandsons out there and fly kites and airplanes that you toss to fly,” McKay says. “She worked with her conditions, and made it positive and pushed and cranked her efforts constantly.”

He adds, “She’s really going to be missed.”

On social media, other members of the Detroit community posted tributes to Walker.

“I am completely devastated,” wrote U.S. Rep. Rashida Tlaib, a Democrat who represents Corktown. “My dear friend Debra Walker has gotten her wings. She was one of the most thoughtful and kindest human beings. My boys know her as Gabriel’s grandma, and for many of us she was a loving neighbor and good friend. She always showed up for others.”

She added, “I am sending her daughters, and grand babies prayers of strength. I can’t imagine how they must be feeling right now. She was all about family and community.”

“I’m shocked,” wrote Batch Brewing Co. owner Stephen Roginson. “We were just sitting together at the city council meeting, after all of your hard work to get a street named after Greg. Debra Walker, you were truly a gem. The kind of community member we should all aspire to be. Generous and thoughtful. What a loss to Corktown. My thoughts are with you and your family.”

“My heart is super heavy as I learned that my friend Debra has transitioned and joined the ancestors,” wrote Dominique Campbell. “I met Debra back in 2018 through my work with CitizenDetroit and we instantly bonded over poetry, fashion, community building, and general black girl magic.”

She added, “She was truly one of a kind. She had a presence and spirit that would brighten up the room. And a wisdom that I was honored to be around - even for a short time that I knew her. I am grateful that my last time seeing her was doing something she loved — rocking the stage with her beautiful poetry. I will hold on to fond memories of her forever and carry them with me. My heart goes out to her daughters and her grandsons whom she adored, all of her close lifelong friends and loved ones, and the community that she advocated for and championed. Detroit, and more specifically Corktown, will never be the same. Fly high and rest peacefully the icon and queen Debra Walker.”