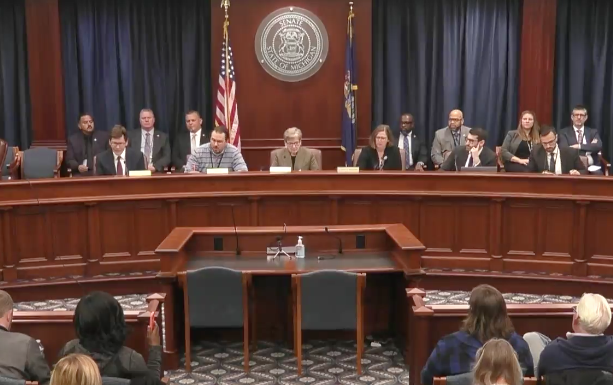 The bipartisan board voted 4-0 in favor of certification, delivering a final blow to the far right’s last-ditch efforts to overturn the election.

The certification seals the fate of an election that delivered a second term to Democrats Gov. Gretchen Whitmer, Attorney General Dana Nessel, and Secretary of State Jocelyn Benson. Democrats also gained control of the state House and Senate for the first time in Michigan in nearly 40 years.

At one point during the meeting, police removed one member of the audience for shouting at canvassers.

Republican Tony Daunt, chairman of the Board of State Canvassers, criticized the politicians who continue to erode confidence in the election by peddling unfounded conspiracy theories. Daunt said the conspiracies are “unfortunately fed by candidates and party officials on both sides of the aisle who feed into this nonsense, who make these claims that fire everybody up because it’s a short-term gain for them, and that’s dangerous to our system.”

“We need more responsible leadership on both sides of the aisle related to these issues because it is critical that people accept the results of an election when it’s all is said and done,” Daunt said. “It’s critical that they have faith in the ability to accept the results and having that is not possible when people who have leadership positions spout nonsense and spout lies and disinformation.”

Before the board voted on certification, several candidates who lost on Nov. 8 claimed the election was stolen. Donna Brandenburg, gubernatorial candidate for the U.S. Taxpayers Party of Michigan, called the canvassers “enemy of the people” and blamed them for the threats against clerks.

“We stand together and right now, you are all being seen as the enemy of the people, and there is not one of us who is going to back down on that from now until Christ comes back,” said Brandenburg, who received just 0.4% of the vote.

She added, “God bless you because you’re going to need the help.”

“Our freedom is hanging in the balance here,” Karamo said. “Our elections are the only way that we the people maintain control of our government.”

Dorian Tyus, a voting rights attorney and representative of the Michigan Democratic Party, urged the canvassers to certify the election, saying the “failure to do so would undermine the spirit of our democracy.”

“It’s your turn to ensure that our democracy works as intended,” Tyus said. “Each member of the board plays an important role in our election process. And your vote will determine how democracy is viewed here in Michigan.”

Daunt told members of the audience that there is a recourse if fraud was committed during the election.

“The allegations being made, if true, there is a course of action you can take with the law, with lawsuits, with criminal investigation,” Daunt said. “It’s dangerous to make reckless accusations.”

In November 2020, Republicans tried to sabotage the election on the state level, saying President Donald Trump should have won. The Michigan Board of Canvassers voted 3-0 in favor of certification, with Republican Norman Shinkle abstaining, saying he wanted to delay the process to investigate claims of fraud.

The sole Republican to vote for certification, Aaron Van Langevelde, was ousted from the board by Republicans.