In Michigan and beyond, Republican state lawmakers are embracing a pushback on gay and transgender rights not seen since the 1970s 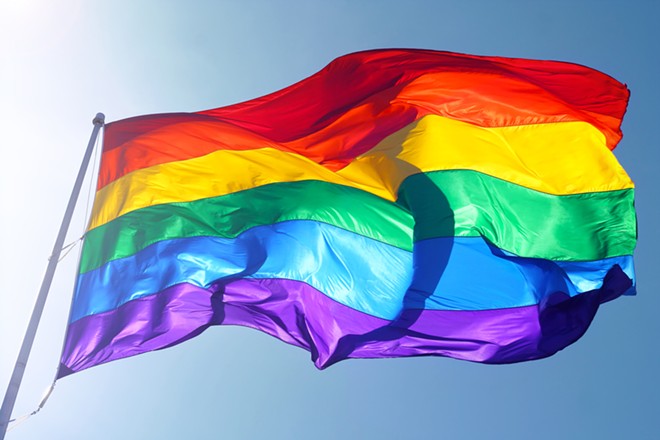 Former State Rep. Lorence Wenke of Kalamazoo had been a Republican his entire life. Then 2004 came along.

“Never even considered changing parties or thinking that the Republican Party wasn’t generally the answer to the world’s problems. But then I got to Lansing,” Wenke said.

During his first term in the Michigan House in 2004, Republican then-President George Bush expressed his support for a constitutional amendment to define marriage as being between one man and one woman.

To Wenke, this “just didn’t make any sense.” He had sought to educate himself on LGBTQ+ issues after hearing that his best friend in grade school had married another man in Canada.

“Through that whole process, I began to realize how LGBTQ people become who they are, and that they do not choose to be who they are.

“[I] just developed a different attitude on it from the Republican Party,” Wenke said.

What Wenke saw in the GOP back then is making another national resurgence. In Michigan and beyond, Republican state lawmakers are embracing a pushback on gay and transgender rights not seen since the 1970s that centers on children, attempts to ban books that reference LGBTQ+ issues or race and block transgender athletes from sports.

Anti-trans bills have also popped up in at least 20 state legislatures, including Michigan, where a bill from Sen. Lana Theis (R-Brighton) seeks to prevent transgender athletes in schools from competing on sports teams that align with their gender identity.

State Republican leadership has also repeatedly stifled bipartisan legislation that would make it illegal to fire or deny housing to someone based on sexual orientation and gender identity.

In 2004, Wenke was one of only two Michigan GOP lawmakers out of 63 to vote against an amendment to the Michigan Constitution that would have outlawed gay marriage. That initiative initially succeeded, but was later overturned by the U.S. Supreme Court in 2015 in Obergefell v. Hodges.

His vote, and staunch commitment to supporting the LGBTQ+ community, forever altered the trajectory of his legislative career.

“Certainly after that, I was not considered for speaker of the House,” Wenke said. “… It certainly kind of separated me from the Republican Party in the sense that I said they were putting discrimination in Michigan’s constitution and [I] opposed it. That doesn’t make you friends in Lansing in your own party.”

‘The new world of politics’

“In a Republican primary, you don’t want to be a gay rights supporter in the Kalamazoo, Mich., area. If you want to win, anyway,” he said.

He said he “certainly” would have lost that 2004 primary for that reason if his opponent, former state Rep. Jerry Vander Roest, hadn’t been hurt by the disclosure of his Lansing arrest for soliciting an undercover police officer for prostitution.

Wenke scraped by and won with about 80 more votes than Vander Roest, he said. He served two more terms in the Michigan House as a Republican.

Wenke then unsuccessfully ran for state Senate twice — the second time as a Libertarian in 2014.

“I didn’t get very far,” Wenke said, “largely due to my pro-gay rights positions.”

“In a Republican primary, you don’t want to be a gay rights supporter in the Kalamazoo, Mich., area. If you want to win, anyway.”

Wenke also ran unsuccessfully for Congress in 2016 as a Libertarian. He went on to help establish a Libertarian party in Kalamazoo County, and is active in pro-LGBTQ+ events and publicly advocates for churches to embrace the community.

Reading about a recent anti-LGBTQ+ fundraising email from Theis, which compared support for LGBTQ+ issues with “grooming” and “sexualizing” children, only strengthened Wenke’s resolve to (most likely) never return to the Republican Party.

“I did read about her. It’s hard to imagine that people that dumb could get to be elected state rep., but they do. It’s just is absolutely amazing to me,” Wenke said.

Theis stirred up controversy in April when she gave a Senate invocation that claimed children are “under attack” from “forces that desire things for them other than what their parents would have them see and hear and know,” referencing the GOP crackdown on teachings that reference LGBTQ+ and racial equity issues.

State Sen. Mallory McMorrow (D-Royal Oak) and other Democrats walked out in protest and spoke out on Twitter about Theis’ remarks.

Theis fired back by specifically naming McMorrow in a campaign fundraising email days later that insinuated she and other Democrats groom and sexualize children. The language echoed ideas aligned with the far-right QAnon conspiracy theory.

“Progressive social media trolls like Senator Mallory McMorrow (D-Snowflake) who are outraged they can’t … groom and sexualize kindergarteners or that 8-year-olds are responsible for slavery,” the email reads.

Theis continues to stand by her baseless accusation, despite widespread backlash. Other Republican leaders have made similar attacks.

In April fundraising appeals, state Sen. Tom Barrett (R-Charlotte) sent messages claiming Democrats are “HELLBENT” on “forcing” children to learn about “dangerous transgender ideologies.” Another text message from Barrett, who is seeking the GOP nomination for the newly drawn 7th Congressional District, appeared as a fake appointment confirmation for “Your Child” to receive “Gender Reassignment Surgery Tomorrow at 9AM.”

Barrett’s WinRed donation appeal also urges supporters to give a monetary contribution to “stop this sick and twisted ideology from poisoning our children. If we fail, our children are doomed.”

Wenke said he’s concerned about the direction of the GOP.

“It is the new world of politics that we’re all seeing. The Republican Party has lost its way, as far as I’m concerned,” he said. “I don’t think I could ever be part of the Republican Party again — but things change, a year or two or 10 years, could be quite different.”

Discrimination as a ‘winning playbook’

In the Michigan Legislature, two bills were introduced last spring to expand Michigan’s Elliott-Larsen Civil Rights Act (ELCRA) — the state’s anti-discrimination act — to include protections against discrimination for sexual orientation and gender identity. Up until 2019, similar bills had not received any Republican co-sponsors.

State Rep. Tommy Brann (R-Wyoming) was the lone Republican to co-sponsor House Bill 4688 in 2019, which died in the Government Operations Committee.

Like in 2019 and many sessions before, those bills have still not made it out of their respective committees, despite significant support from GOP-allied business groups. Neither Brann nor Schmidt returned requests for comment.

Meanwhile, the Michigan Supreme Court is deciding a discrimination case that could result in LGBTQ+ people gaining legal protection at the state level.

Luke Londo, a Hazel Park City Councilmember who was once a “card-carrying Republican,” never felt the need to reconcile his bisexuality with his former party’s often combative views toward the LGBTQ+ community.

“I knew at the end of the day that, for all the ham-handedness and posturing of the Republican Party when it came toward the LGBTQ+ community, … none of it was actionable. It was all just bloviating,” Londo said.

“I got the hell out,” Londo said. “[But] when I left the party, it certainly wasn’t due to my sexual orientation. … I left the Republican Party because it didn’t even come close to resembling the party that I joined, in every way.”

Still, Londo is acutely aware of the danger that can come from the GOP’s current posturing on LGBTQ+ issues — particularly when the rhetoric equates those issues with accusations of “grooming.”

“I think the Republican Party’s current posturing on LGBTQ+ issues, and grooming and ridiculous complaints and accusations like that is opportunistic, but also just grossly offensive and extraordinarily dangerous,” Londo said.

He said accusations like Theis’ can be traced back to the “Save Our Children” crusade against Florida’s gay rights movement in the late 1970s, led by singer and former beauty queen Anita Bryant. Her campaign adopted the slogan, “Homosexuals cannot reproduce so they must recruit.”

“Any sane, rational person can look at these claims of recruitment and grooming and things like that as just absolutely ridiculous and completely insane and devoid of reality,” Londo said.

“And then I realized, as it’s progressed beyond Florida and is now being promoted by elected state senators in the state of Michigan, it’s terrifying. It’s extremely terrifying. It’s honestly something that’s weighed on me and weighed on fellow LGBTQs.”

Erin Knott, executive director of Equality Michigan, said the rhetoric has only gotten worse since the 1970s.

“When you when you look at history, it’s a winning playbook when you utilize fear, hate, discrimination, when you contrast people as different from you,” Knott said. “… The playbook that won at the ballot box was going after the LGBTQ+ community.”

“Any sane, rational person can look at these claims of recruitment and grooming and things like that as just absolutely ridiculous and completely insane and devoid of reality.”

Nearly one-third of LGBTQ+ youth have attempted suicide. In 2015, the state reported that LGBTQ+ youth in Michigan high schools were four times more likely to consider suicide than heterosexual youth.

Knott said that in 2021 alone, the Trevor Project — a partner of Equality Michigan that focuses on suicide prevention for LGBTQ+ youth — fielded 6,200 calls on their crisis line from LGBTQ+ kids in Michigan.

Leon Drolet, a GOP former state representative from Macomb County who is openly gay, says controversies like these are “of critical importance to the fringes of both parties.”

“There are elements within the Republican Party that need to be motivated by showing as much indoctrination and as possible going on,” Drolet said.

Drolet served in the Michigan House from 2001 to 2006. He acted as statewide chair of the Michigan Civil Rights Initiative during his last year, an effort that successfully approved an anti-affirmative action constitutional amendment prohibiting governments in Michigan from discriminating against or giving preferential treatment to anyone based on race, gender, ethnicity or national origin.

He went on to become a Republican county commissioner and is now the Republican treasurer of Macomb Township.

Drolet emphasized that he believes both Republicans and Democrats distort the truth to some extent to raise funds and pull in media attention.

“There’s not any sort of widespread effort by people who are lesbian or gay to groom kids … but to some elements of the far right, it’s very necessary to perpetuate that that’s happening and to find any case they can somewhere.”

Drolet said that because the average Democrat or Republican votes primarily in the November general election, the message for primaries needs to be tailored to appeal to a narrower subset of the base.

“In fundraising, it gets even narrower than that. Do some Republicans engage in hostility or misleading statements and ideas about lesbian, gay, bisexual and transgender people? Yes, some of them do,” Drolet said, adding that he believes some Democrats do the same.

However, when it comes to equating members or supporters of the LGBTQ+ community with pedophilia, Drolet draws the line.

“Insinuations that people who are gay, lesbian, transgender, bisexual are child predators are despicable insinuations,” he said. “Those insinuations should be widely condemned, as should any broad insinuations about any group of people … especially when they’re as misguided and have such a long history of being used to really oppress folks.”

Knott emphasized that the rhetoric comes with the particularly steep cost of putting LGBTQ+ children at risk.

“This really is about electrifying their base, making sure that they turn out and vote. And at the end of the day, it’s just causing so much harm to our LGBTQ+ youth,” Knott said.