The Supreme Court is overturning ‘Roe v. Wade’ just because it can

The Alito 5 is signaling that anything goes 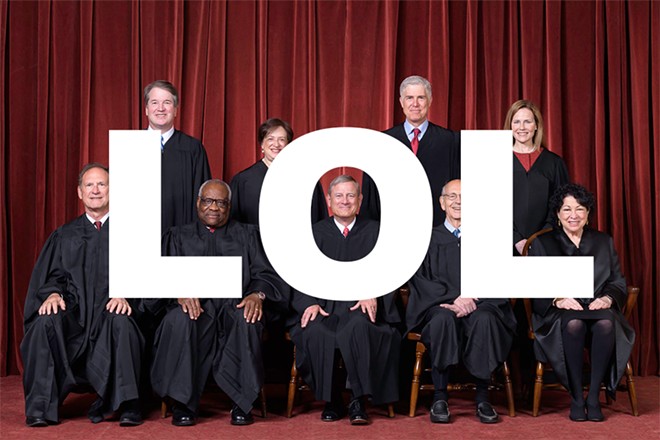 Public domain
The Court of LOL, Nothing Matters.

Of the five Supreme Court justices about to set women’s rights back a half-century:

So let’s not pretend the forthcoming reversal of Roe v. Wade and Casey v. Planned Parenthood has an ounce of legitimacy, or that a future court should consider it stare decisis and not overturn it at the first opportunity.

Let’s not pretend that Justice Alito’s screed is rooted in the law, history, science, or anything except sneering contempt for women’s autonomy.

Let’s not pretend that anyone actually gives a shit about who leaked it.

And let’s not pretend they’re going to stop here.

Alito, of course, went out of his way to say they would stop here, to assure us that abortion exists on its own moral plane. “None of the other decisions cited by Roe and Casey involved the critical moral questions posed by abortion.”

That’s absurd. And the implication that this decision is a one-off is an obvious lie in two ways.

The first is direct: The foundation on which the constitutional right to abortion has existed for the last 49 years protects other civil rights that are now in a very perilous place.

The second is unimaginably broad. By overturning Roe — one of the most litigated cases of the last century — for no other reason than they really, really wanted to, the Alito 5 is signaling that anything goes. Precedent is irrelevant. The old rules no longer apply. This is the Court of LOL, Nothing Matters.

Don’t believe me? In Texas on Wednesday, Gov. Greg Abbott said he wanted to revisit Plyler v. Doe, a 1981 case in which the court ruled that states must provide a public education to undocumented immigrants. What’s changed? “The times are different.”

North Carolina Republicans have a pending appeal asking the court to embrace a right-wing fever dream called “independent state legislature theory,” which courts have rejected for decades. If this one bites — at least four justices are interested — neither state courts nor state constitutional amendments could block legislatures from setting draconian voting rules, gerrymandering till their hearts’ content, and appointing their own presidential electors.

That might prove a bridge too far even for this crew. Or not. Who knows?

But for now, let’s return to the direct threat.

Roe determined that the constitutional right to abortion lay in the Due Process clause of the 14th Amendment, which says that no state shall “deprive any person of life, liberty, or property, without due process of law.”

Beginning in a 1965 decision striking down a Conneticut law that banned married couples from using contraception — followed by decisions that legalized interracial marriage in 1967 and contraception for unmarried couples in 1972 — the court interpreted deprivations of liberty to include intrusions on privacy.

Roe was the fruit of that tree. So, too, were decisions that legalized same-sex intimacy in 2003 and same-sex marriage in 2015.

Alito, however, says there is no right to privacy and, thus, no right to abortion, because it is not “deeply rooted in this Nation’s history and tradition” and “essential to our Nation’s scheme of ordered liberty.” “An unbroken tradition of prohibiting abortion on pain of criminal punishment persisted from the earliest days of common law until 1973,” Alito writes — mangling history and relying on a 17th-century rape apologist who hanged “witches.”

The only rights “deeply rooted” in history are those the straight white men who presided over that history recognized. Consequently: The right to open carry your AR-15? Essential and deeply rooted! The right to a basic medical procedure? Take them shoes off and get back in the kitchen, lady.

(Coincidentally, there were no women among the 55 framers of the Constitution. But there were many men who enslaved other humans, and one guy who died after sticking a whale bone up his penis. True story.)

The rights to same-sex marriage, same-sex intercourse, birth control, and even interracial marriage only emerged in the last 60 years. They’re not, by definition, “deeply rooted.” They also sprang from the notion that privacy is inseparable from liberty. Alito separates them.

Since privacy isn’t a right, the government — the always informed and rational members of state legislatures — should make healthcare decisions for you.

If you’d like to see where this is headed, look to Louisiana, where the legislature is considering a bill that will declare a fetus a person from the moment of fertilization — not implantation, just fertilization — and charge women and abortion providers with homicide. No exceptions for rape or incest, or to save the mother’s life. (The law directs law enforcement to ignore any state or federal court that gets in the way.)

That’s not just an abortion ban. That’s also a ban on plan B and in vitro fertilization, which causes thousands and thousands of fertilized embryos to be discarded each year.

Or look to Missouri, where Republicans are trying to figure out how they can not only ban abortion in their state, but make it illegal to provide abortion services to Missouri residents in other states, too.

If you’re wondering how they’ll track down women who cross state lines, New York Magazine’s Intelligencer has the spine-chilling answer: “Missouri provided a hint when its state health director testified in the fall of 2019 that he’d compiled a spreadsheet of Planned Parenthood patients’ last menstrual periods.”

This is post-Roe America. Republican legislatures are going to see how far they can push the envelope, and, until its composition changes, the Supreme Court is going to tell them to keep pushing further. 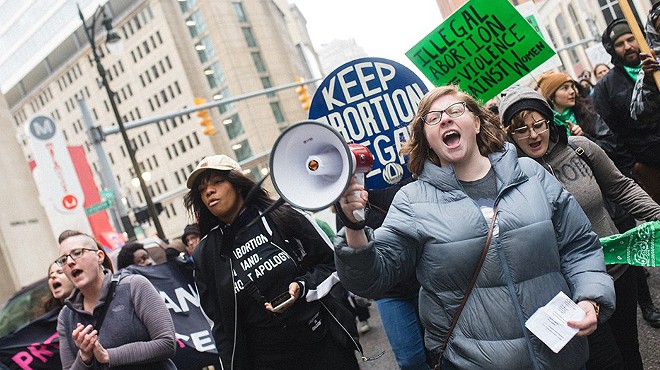 Inside Michigan’s battle to protect the right to abortion: From the governor’s office to the streets, it’s all hands on deck