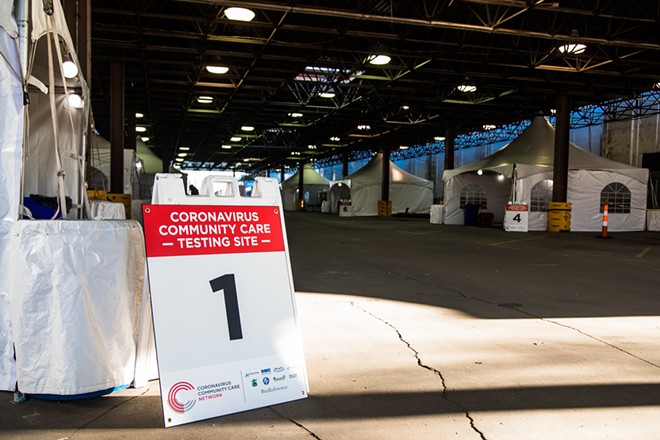 City of Detroit
Testing site at the former Michigan State Fairgrounds in Detroit.

Michigan reported 62 new deaths from the coronavirus on Wednesday, bringing the state total to 479.

With deaths more than doubling every four days, Michigan ranks third in the number of deaths in the U.S., behind New York and New Jersey. Top federal government officials estimated this week that between 1,000 and 4,500 Michigan residents will die from the coronavirus.

The number of positive coronavirus cases in the state increased to 12,744, up by 1,953 cases, the largest single-day increase as Michigan dramatically increases its testing capacity. Still, a majority of sick residents are still not getting tested because of a critical shortage.

Of the state’s 83 counties, 70 have positive cases.

By far, Detroit has the highest death rate in the state. With 6.7% of Michigan’s population, Detroit has about a quarter of the state’s deaths and confirmed infections.

The increase comes as hospitals are running out of ventilators, intensive-care beds, trained medical staff, and personal protective gear like masks, gloves, and gowns.

The death rate is far higher for men, who make up 61% of the fatalities but 47% of the positive cases.

Globally, there are 1.1 million coronavirus cases in 181 countries, and more than 58,00 deaths as of Friday afternoon, according to Johns Hopkins University & Medicine. The U.S. has more positive cases than any country in the world, with 261,438 confirmed infections and 6,699 deaths.