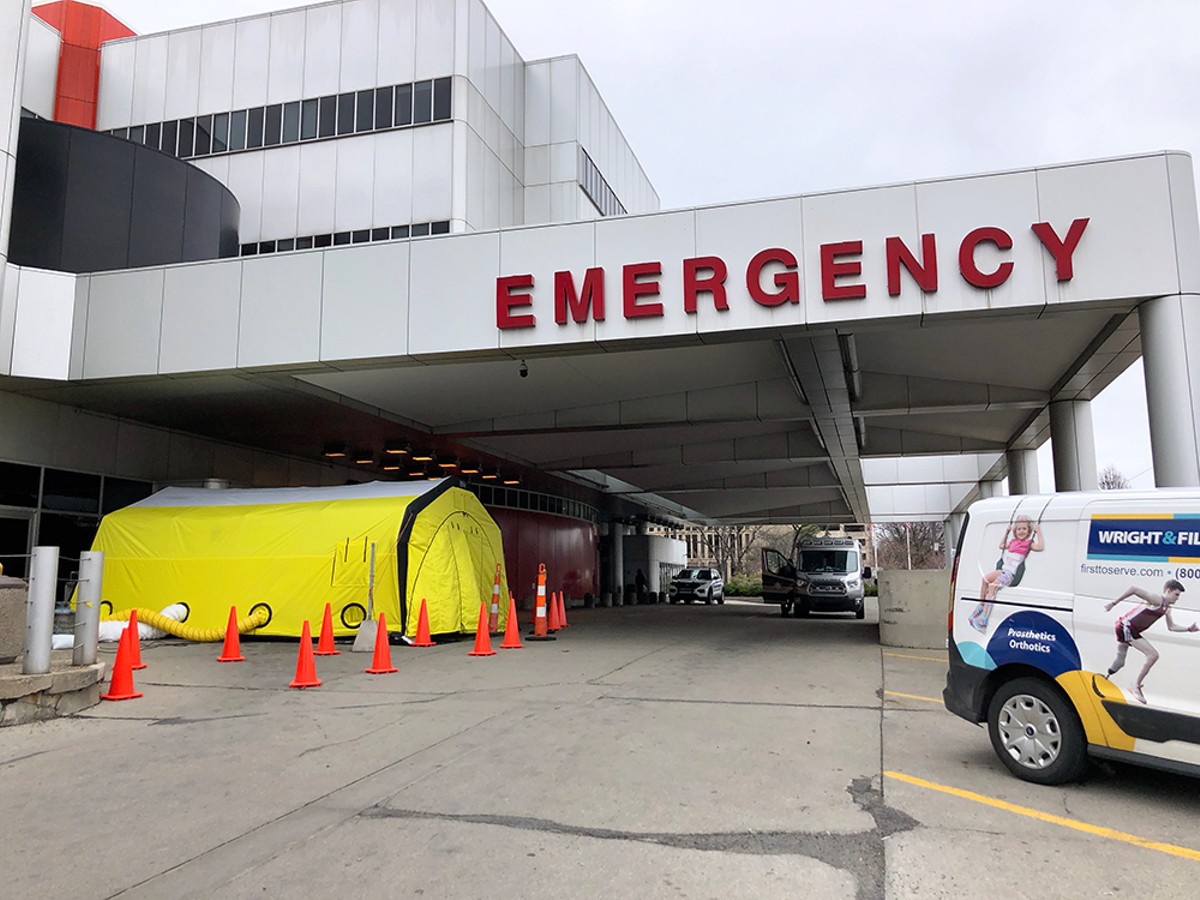 As the coronavirus quickly spreads across metro Detroit, hospitals are running out of ventilators, intensive-care beds, trained medical staff, and personal protective gear like masks, gloves, and gowns.

Hospitals are taking drastic measures and even pleading with the public to donate supplies to prevent the health-care system from becoming overwhelmed.

With more than 1,000 new coronavirus cases reported every day in metro Detroit, hospitals are already rationing supplies and scrambling to add more beds.

"Many of our hospitals, particularly in southeast Michigan, are at or near capacity. Intensive-care units are full, and emergency departments are overloaded," chief medical executive Dr. Joneigh Khaldun said during a news conference Thursday morning. "The only way we're going to be able to effectively handle this outbreak is by coming together and coordinating our health-care resources as a state."

At the Detroit Medical Center, two patients are being placed in intensive care units designed for one patient.

The number of patients hospitalized with COVID-19 nearly doubled every three days last week at Beaumont Health System, the state's largest health-care system, with eight hospitals across metro Detroit. Now, Beaumont is sending home a higher proportion of its coronavirus patients, according to records obtained by Metro Times.

"We have been actively transferring COVID-19 patients within our system to other Beaumont hospitals, as appropriate, if one hospital has more capacity than another," Beaumont Health Chief Operating Officer Carolyn Wilson said at a news conference on March 24. "However, across our system, we are facing limitations and nearing capacity with our staffing, personal protective equipment, and mechanical ventilators."

In the past week, the death toll at the hospital surged from four to 83.

The health system is converting operating rooms into intensive-care units and transferring patients between hospitals. Beaumont Hospital in Wayne temporarily closed its emergency room to make space for coronavirus patients.

At Henry Ford Health System, the number of hospitalized coronavirus patients rose from 86 on March 23 to 539 on March 29. That's not counting patients who are hospitalized while awaiting testing. Two of the system's five hospitals were at capacity last week, said Dr. Betty Chu, who is leading Henry Ford's coronavirus response.

"We expect a significant increase in volume over the next couple of weeks," Chu said during a news conference last week.

To free up space, the health system is converting surgical rooms into intensive-care units, adding bed space to outpatient units, and redeploying its athletic trainers to help with COVID-19 care.

With ventilators on short supply, Henry Ford is bracing for the possibility that health-care workers may have to decide who gets life-saving care and who doesn't, according to a draft of a policy to be sent to the system's nurses, doctors, and other health-care workers.

"Some patients will be extremely sick and very unlikely to survive their illness even with critical treatment," the leaked memo states. "Treating these patients would take away resources [from] patients who might survive."

The memo continues: "Patients who have the best chance of getting better are our first priority. Patients will be evaluated for the best plan for care and dying patients will be provided with comfort care."

It adds: "Patients who have a ventilator or ICU care withdrawn will receive pain control and comfort measures."

"It is our hope we never have to apply them and will always do everything we can to care for our patients, utilizing every resource we have to make that happen," Dr. Adnan Munkarah, executive vice president and chief clinical officer of Henry Ford, said in a written statement.


Gov. Gretchen Whitmer emphasized the need for ventilators at a press conference on Monday.

"We are going to need thousands of more ventilators," Whitmer said.

To make more room for coronavirus patients and free up staff, hospitals across the state have canceled elective and nonessential surgeries.

The U.S. Army Corps of Engineers is looking for alternative sites to serve as makeshift hospitals to handle the overflow of patients. TCF Center (formerly Cobo Hall) in downtown Detroit has been chosen as the site of a field hospital with up to 900 beds, prompting the cancellation of the 2020 North American International Auto Show.

"The State of Michigan is working around the clock and doing everything we can to slow the spread of the coronavirus," Whitmer said in a news release Sunday. "By mobilizing quickly to construct a large alternative care facility in Detroit, we can help save lives."

The Army Corps is looking for additional sites, including the Detroit Pistons training facility and two dorms at Wayne State University.

The state also is facing a critical shortage of health-care workers. On Monday, Whitmer tweeted a video in which she called for out-of-state nurses, doctors, respiratory therapists and other health professionals.

The highly contagious disease represents a significant challenge that hospitals haven't faced for generations. Between 10% and 18% of COVID-19 patients require hospitalization, varying by city, studies show.

A vast majority of the more than 5,500 licensed beds in metro Detroit are already full, even as public health officials expect the new cases to exponentially rise for two to three more weeks.

"Current models suggest we are likely several weeks away from a peak in the number of cases in Michigan," Khaldun said Monday. "Unfortunately we know several of our hospitals in the state, particularly in southeast Michigan, are at capacity."

The steep rise in new cases and deaths over the past week in Detroit have alarmed public health officials.

Detroit has become a "hot spot" and will have "a worse week next week," U.S. Surgeon General Jerome Adams warned Friday on CBS This Morning.

Mayor Mike Duggan said the city is bracing for the worst.

"We are preparing as if we get the kind of surge that New York had," Duggan said at a news conference last week. "It is really concerning."

With more than 7,500 confirmed infections, as of Tuesday, Michigan ranks fourth in the nation in total confirmed cases, trailing California, New Jersey, and New York.

The steep rise in new cases and deaths over the past five days in Detroit have alarmed public health officials. tweet this

Health-care workers also are running out of personal protective gear, putting them and their families at risk of becoming infected. With a staff shortage, hospitals can't afford to lose more nurses and doctors.

"How do we protect health workers? It's a logistical issue that has not been addressed completely yet," Pinar Keskinocak, a Georgia Tech professor with extensive expertise and publications on pandemics, tells Metro Times. "The lack of personal protective equipment is a huge issue."

Nurses and doctors tell Metro Times they're being forced to reuse masks, gloves, and other protections recommended by the U.S. Centers for Disease Control and Protection.

"We're putting ourselves at personal risk without the appropriate protective equipment, without the tests we need, and that's because of the failed administration over the past two months," Dr. Rob Davidson, an emergency room doctor in Michigan, tweeted. Hospital workers, he said, are "flying blind and hoping for the best."

The Trump administration botched the rollout of COVID-19 testing and failed to supply states with adequate equipment. Last week, Trump suggested governors "try getting it yourselves," referring to critical supplies.

"We need respirators and ventilators and personal protection equipment."

"This is a good start, and it will help us protect Michiganders and slow the spread of COVID-19," Whitmer said in a news release."I look forward to the federal government's continued partnership as we work to fight this virus."

Whitmer has also called on residents to donate supplies and even volunteer to help health-care workers combat the spread.

"The time is now to save lives," Michigan Department of Health and Human Services Director Robert Gordon said in a news release. "Doctors, nurses, medical assistants — please volunteer where we need you most. You can save lives."

Automakers are stepping up to produce ventilators and personal protection equipment.

Whitmer said it's going to take a group effort to combat the spread.

"This crisis is scary," Whitmer said at a news conference. "We can bend the curve and save the health-care system."