Karl Dresch, the first known Michigan resident arrested by the FBI for storming the U.S. Capitol, sold right-wing paraphernalia out of his Calumet home and threatened "war everywhere if we let this election get stolen."

Dresch, who is the son of former state Rep. Stephen Dresch, R-Hanover, was arrested following a traffic stop in the Upper Peninsula, The Detroit News first reported. He’s expected to make his first court appearance in Marquette on Wednesday.

A Metro Times review of his Facebook page shows Dresch was obsessed with President Donald Trump, insisted the election was stolen, called COVID-19 a “fake disease,” and said suspects accused of plotting to kidnap Gov. Gretchen Whitmer “made a procedural error.”

On Christmas Eve, Dresch urged people on Facebook to attend the “Stop the Steal” protest as “Trump has requested” and shared a tweet in which the president said “Voter fraud is not a conspiracy theory. It’s a fact.”

“We cannot allow Harris Biden Corporate Communist regime to take control,” Dresch wrote. “that's why I urge all able bodied men that can possibly make it to go to Washington DC on January 6 as commander in chief Trump has requested, I am making all arrangements so I can be there myself.”

On the day of the insurrection, Dresch posted photos on social media of the mob storming the Capitol and bragged that he and others had entered the building, according to a federal court filing.

“That's right outside the house of representative...we got in!” he allegedly wrote. “Took a lil gas ...wtf I love masks now!”

Posts from the riot have since been removed.

In the court filing, an FBI agent wrote that there "is probable cause to believe that Dresch committed subject offenses that are under investigation, including by unlawfully entering in and remaining in the U.S. Capitol on January 6, 2021."

Dresch didn’t remove many other posts, including one that said, "7-4-1776=1-6-2021,” referring to the Declaration of Independence and the date of the Capitol protest.

From his house, Dresch sold right-wing paraphernalia such as hats, stickers, and flags. One sticker depicted a car running over protesters below the words, “All lives splatter. Nobody cares about your protest.” Another sticker depicted a gun with the phrase, “Get pumped!” He sold confederate flags and Trump 2020 hats and stickers.

“Christmastime is near! Stop by for some quality unique gifts that won't cost you an arm and a leg, fine selection of durable USA, historical and patriotic flags of all sizes,” Dresch wrote. 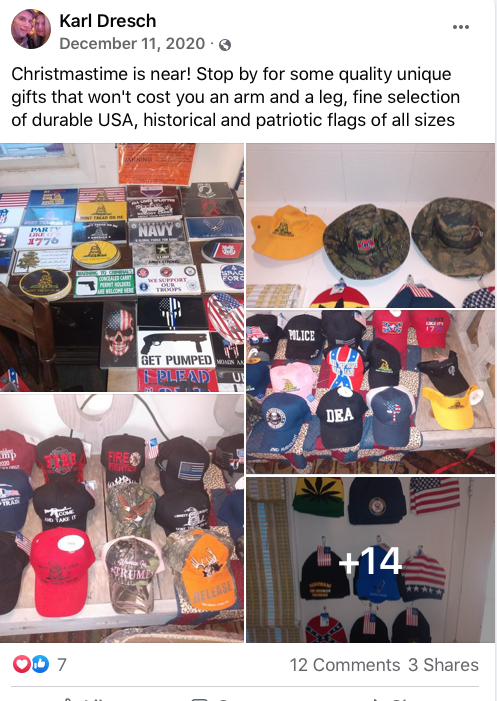 On Dec. 5, he wrote, “Traitors are worse than enemies, what did they used to say about an enemy and a traitor and only one bullet?”

He declared on Nov. 23, “It’s war everywhere if we let this election get stolen.”

Dresch appeared paranoid of a nefarious "communist" plot and encouraged people on Nov. 27 to “keep your tank full and fuel on hand, are sure your family has food in stock and supplementary heating options, KEEP YOUR POWDER Dry!!!”

“Donald Trump has won this election but a theft is being attempted , your ability to communicate will be impaired by these conspirators, you cannot depend on your phone , email, or Facebook, HAVE A CB RADIO!” he posted above an image that read, “Liberty or Death. Don’t Tread On Me.”

Dresch also directed his anger at Whitmer, whom he suggested was part of a plot “find a new powerful strain” of COVID-19.

“What's the citizens arrest procedure again?,” he wrote. “the last guys made a procedural error and she got off on a technicality #LiberateMichigan #manoftheyear/person of the year.”

Dresch is among dozens of alleged insurrectionists who have been charged in the Capitol siege. The FBI said many more arrests are expected.