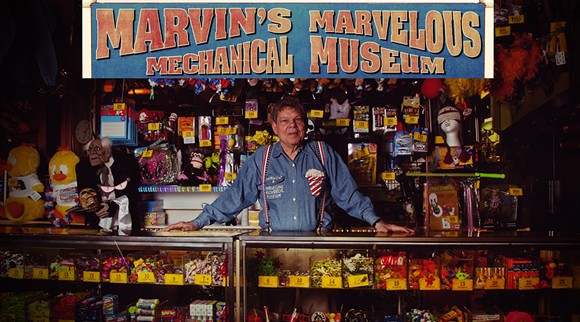 Photo via marvin3m.com.
Marvin Yagoda, founder of Marvelous Marvin's Mechanical Museum, died Sunday evening, according to WDIV. He was 78.

The eccentric businessman created the Farmington Hills marvel, having started collecting items upon his graduation from the University of Michigan.

According to a 2003 Metro Times interview with his son Jeremy, Yagoda's "insanity" was to blame for the collection of creepy-looking carnival machines that you might expect to see in the film Big — everything from ancient pinball machines, kiddie rides, ’80s thriving arcade games, and stranger wonders such as P.T. Barnum’s Cardiff Giant and a once-working electric chair in which 30 people died. Those peculiar items reside inside the 5,500-square-f00t museum.

In the same interview, Jeremy Yagoda noted that the museum has attracted its fair share of celebrities — David Copperfield, Eminem, and several famous athletes have made appearance at the vintage arcade emporium.

Yagoda and the museum were also featured on an episode of American Pickers:Read more about Yagoda, his museum, and his eccentricities here.

Alysa Zavala-Offman is the managing editor of Detroit Metro Times. She lives in the downriver city of Wyandotte with her husband, toddler, mutt, and two orange cats.
Read More about Alysa Zavala-Offman
Scroll to read more ICYMI articles