Is there a tiger in the Packard Plant? 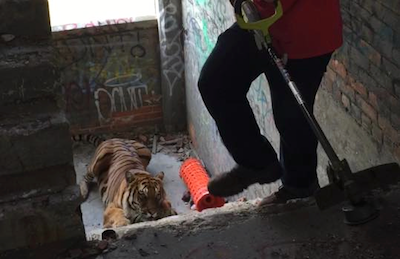 Photo from Andy Didorosi's Facebook page
It's hard to tell in these days of image manipulation and high-tech trick photography, but the images posted to Facebook in the last several hours would seem to suggest there's a tiger inside the Packard Plant, the abandoned facility on East Grand Boulevard that has become a playground for street artists and urban explorers.

The photos, posted to Andy Didorosi's Facebook page show what appears to be a tiger crouching on a concrete landing while people look on. (A video posted to Didorosi's Instagram account appears to show a man perhaps fending off the beast with a weed whacker.) The photos prompted a number of comments, including pleas to call the zoo, to not call the police, and to get the heck out of there.

Time will tell if we're being fooled or not, but here's the full image. Stay tuned for updates.


12:06 p.m.: Four minutes ago, WJBK-TV reports "Detroit Police are responding to a report of a tiger on the loose at the Packard Plant on Detroit's east side."

12:23 p.m.: WXYZ-TV report says: "The spokeswoman said the tiger was unharmed and was being cared for by a professional trainer."