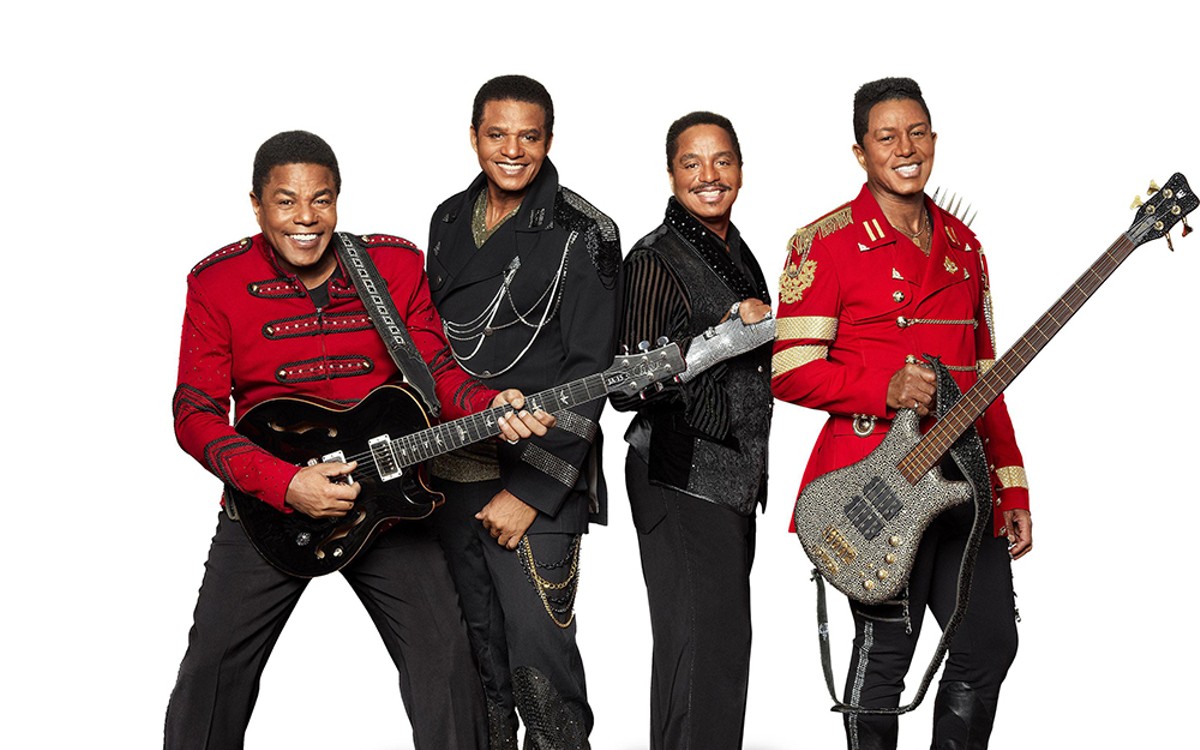 He will be here this weekend, up on that stage. No hologram required.

When Detroit celebrates its part in the making of the Jackson 5 during the second annual Detroit Music Weekend by renaming a stretch of Randolph Street after Michael Jackson and presenting four of his brothers with the key to our city, the Jacksons will return the love by performing a free outdoor concert Saturday on the Madison Central Stage. Jackie Jackson says that while you may not see his late baby brother moonwalking or harmonizing alongside him, Jermaine, Marlon, and Tito, you will feel his presence onstage.

It's still the Jackson 5.

Jackie, who lives in Las Vegas, admits he feels the aura nearly every day at home. "Every time I go toward the Strip and stop at a stoplight, there's this big ol' sign with Michael's face on it [for the Cirque Du Soleil "Michael Jackson ONE" show at Mandalay Bay]," he says by phone from his home recording studio, ground zero for his brand-new music label, Critically Amused. "It happens every time I go by. He says to me, 'Brother, I see you.' And I say, 'I see you, too, little brother.' And that's the same way we feel on stage."

"His spirit is always with us," Jackson adds. "I know at any given moment where he would be on a certain song, exactly where he would be on the stage. So do all the other brothers. We just feel him, because we know if he was here, he'd be giving 110 percent. So that's what we try to do, too. Because no one can really replace him, you know?"

"Detroit is like home for us because when we first started, a lot of people don't know this, but we lived in Detroit for a while," says Jackie, at 67 the eldest Jacksons brother. "We were working with [the late singer-producer] Bobby Taylor. In fact, we stayed with him, living in some tall apartments on West Grand Boulevard, going over songs and learning about the business with him. He headed the group Bobby Taylor and the Vancouvers, who had some great hits themselves. He was an incredible talent, just a great guy to be around."

Next year marks the 50th anniversary of the Jackson 5's signing with Motown Records. (That can't be right, can it?) "You know, time goes by fast when you're having fun," Jackie says, laughing. "It's been some great, great years along the way. I would never trade it for anything in the world because I learned so much from it, and met a bunch of friends along the way."

"We were the biggest fans of Motown growing up," he says. "We learned all the Motown music because it was the hottest music on the radio, from this little company in Detroit. And once we got signed we told all our friends in the neighborhood, 'Hey, we got signed to Motown!' And they would go, 'No, you're not.' No one believed us! A whole year went by and everybody said, 'We haven't heard anything yet.' Then another year goes by! Motown was just preparing us."

"We were working with some of the greatest writers, the greatest producers," says Jackie, in whisper-soft tones recalling his trademark tenor vocals. "It was like going to college every day, learning our craft, learning about the system and how it worked. It was unbelievable just to meet all those stars who took us in, showed us the ropes. They were very nice, all of them. It was like a family. And when we finally came out, we came out strong. When we came out, everybody knew it."

Jackie hopes for the same success with the first acts on his new label. "We signed a DJ crew from Paris called Gold Lemonade and an artist from Saint Lucia, D.B.L.," he says. "We've already shot about seven videos between the two of them. They're very talented, very colorful. I'm really excited about the artists I have."

Jackie says his brothers also keep their hands in the music business when they're not performing as the Jacksons. Blues devotee Tito tours as frontman with the late B.B. King's band. Whether it's interacting with young musicians or chasing his 4-year-old twins, River and Jaylen, Jackie — rarely called by his given name, Sigmund Esco Jackson, Jr. — sounds, looks, and moves much younger than his age would suggest.

"I take my Flintstones vitamins every single morning," he laughs. "And I stay out of the nightlife, the clubs. I try to stay in striking distance. I still splurge on sweets every once in a while. Sometimes you have to, you know? But I try to stick to eating right and being as healthy as I can."

The Jacksons will perform at at 9 p.m. on Saturday, June 16 at the Madison Central Stage; 350 Madison St., Detroit; 313-887-8501; For performing schedules and complete information about the 2018 Detroit Music Weekend, go to detroitmusicweekend.org; Admission is free.