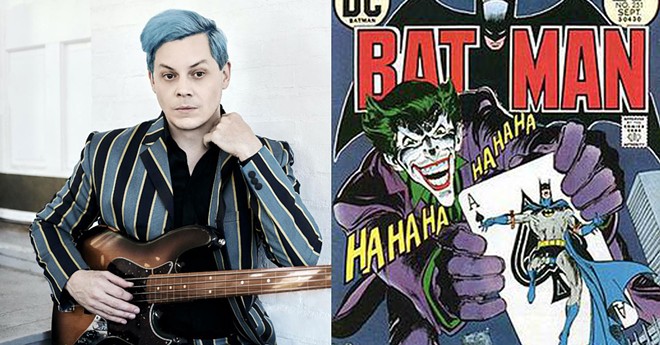 With his famously pale skin, a penchant for colored suits, and a new blue hairdo, rock star Jack White has never looked more like the Batman bad guy the Joker. So it’s perhaps no surprise what DC Comics chose to be the “real” name for the iconic supervillain.

According to issue No. 5 of the comic book series Flashpoint Beyond, which dropped earlier this week, the Joker’s original name is “Jack Oswald White.”

White took to Instagram on Wednesday to say he was honored by the news.

“I’d love to thank DC comics for giving The Joker the name of ‘Jack White’ after me,” he wrote in an Instagram post. “Though his hair is usually not as blue as mine, i still take it as a flattering gesture on their part and consider it an honor. It was a lonely journey through my life being the only person with that name until now.”

In a separate post, White said that coincidently, he commissioned DC Comics artist Mikel Janin to create an illustration of him in the style of the Joker for the album artwork for his record Fear of the Dawn, which was released earlier this year.

“I sent the drawings he had done of the Joker that i loved, but i didn't want him to make me look like the Joker, only using some of the intensity of the face and bone structure style that he used, just less maniacal haha!” White wrote.

He added, “Bizarre patterns and coincidences emerge in the universe that we only see glimpses of at times, some meaningful, some meaningless. A large thank you to Mr. Janin for contributing this wonderful work to the record.”

White is a comic book fan. Among the treasures acquired thanks to his “Seven Nation Army” royalties is Action Comics No. 1, the 1938 first appearance of Superman. He told The New Yorker that he considers it to be “an important moment in literary history” and keeps it in a temperature-controlled vault in Nashville, where the Detroit-born musician now lives.