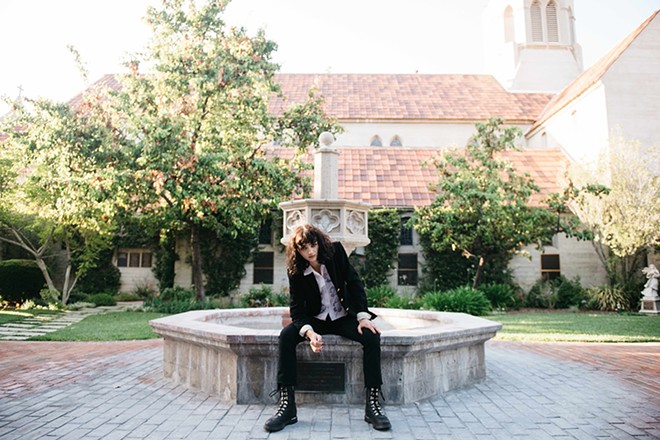 Dana Foote, known as her stage name Sir Chloe, exploded onto the scene last year with the single "Michelle" off the debut EP Party Favors. The project came into existence during Foote's final year of studies at Bennington College in Vermont, where she took inspiration from Balkan folk music, indie alternative, and living a bicoastal life. Now, Sir Chloe is taking its music on the road on a tour with alt-J and Portugal. The Man. We caught up with Foote on becoming a TikTok sensation, going out on tour, and the East coast music scene.

Metro Times: What is it like suddenly finding fame overnight? It seemed like "Michelle" was ruling TikTok there for a little while. What was it like to have your song floating around TikTok, as opposed to it getting the radio play first?

Dana Foote: Well, songs don't typically go to radio until they have a lot of momentum behind them, or unless you're signed to a big label, and they're trying to push a song from the get-go. It's pretty hard to get a song on the radio, just randomly. So something organic, like TikTok, where the kids are excited about the song, and they want to listen to it and share it with each other, and explore different creative ways that they can visually express themselves with the song, was really great and really special. It was wonderful and really appreciated.

Metro Times: What's it like approaching the stage after being away for a while due to the pandemic?

Dana Foote: We're definitely getting our sea legs. We played a lot at our college, and then we graduated, and shortly thereafter, the shutdown happened, and we didn't really get to tour. So you know, it feels very fresh right now, for sure.

Metro Times: You were influenced by traditional Balkan folk music. How did you start listening to that?

Dana Foote: Mostly vocally, I found it because I was taking a class at my college. I can't remember the title of the class, but the thesis of it was just exploring different vocal techniques around the world, and one of the vocal styles that we studied ... was Balkan folk music, which is very broad, because it's a large part of the world. It hits you in the chest as soon as you hear it. And when it was a big class of people who were all singing together, we would try to learn the styles, we would bring people in who had either studied the vocal stop techniques or were from the parts of the world where we were studying, and had grown up singing that way. And when we were all singing the Balkan songs, it was just very ... it's like a lot of really close harmonies and you know, straight tone, a lot of like, singing that sounds like yelling. And I just really love that. ... That music is really aggressive and intense, and especially, I love aggressive music sung by a feminine voice.

Metro Times: What's coming out next?

Dana Foote: We're working on a new album. It's mostly written, and we're just starting to record, and we play with quite a few new songs in our set right now. So we've got a lot of the work, a good chunk of the album that we've been playing live.

Metro Times: What are you looking forward to most now?

Dana Foote: We've been talking about maybe scheduling another headlining tour. Beyond that, since live music has come back, I've been getting into a lot more of the music scene in New York, and a lot of the shows that go on in like the East Village and Brooklyn. There's a really fabulous community of musicians here. It's really fun. I've been playing just to keep things warm between tours and just because it's fun. We're playing shows with our friends, and we've got a show coming up next week, which is just like, my friend's album release party, and we're gonna open up for them. That's just really fun because you get to play for an audience of your friends, and it's like a lineup of all your friends.

Metro Times: If you could pick one artist to collaborate with, who would it be and why?

Dana Foote: You know I always say this, but probably Pile. Rick McGuire is one of my favorite songwriters have of all time, and I really love the way that he sings and his guitar playing. I'd love to just sit down and write with him and just pick his brain about lyrics, and also just befriend him because he's cool.

Metro Times: What are you listening to currently?

Dana Foote: I've actually been getting really back into that Sky Ferreira album, Night Time, My Time. I've also been listening to Friends Share Lovers by And The Kids. And The Kids' vocalist is another vocalist who sings with, like, a straight tone that I really love. I've been listening to Either/Or by Elliott Smith a lot.

Romanian import and Greek school dropout Konstantina Buhalis was born in Bucharest, Romania, and came to Detroit in December 1995, where her first few years of life were enjoyed on the east side and Greektown. Buhalis spent her early years reading the Detroit Free Press, Teen Vogue, and Rolling Stone and began...
Read More about Konstantina Buhalis
Scroll to read more Local Music articles