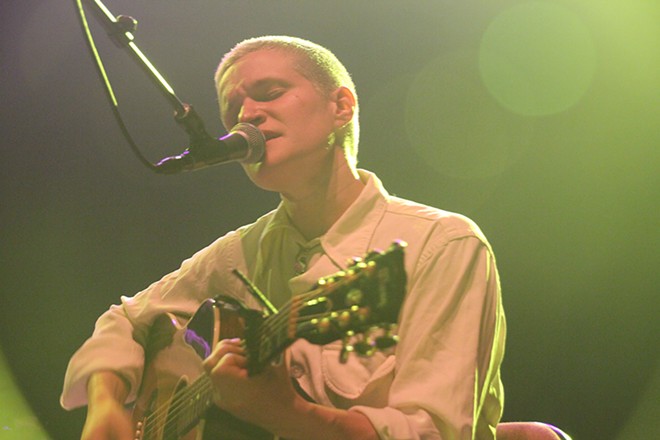 “You might never see a set like this again,” muttered Adrianne Lenker, Big Thief’s frontwoman, in the middle of the band’s Saturday night set at the Royal Oak Music Theatre.

Between songs, Lenker spoke meekly, in a volume barely above a murmur, some quips more audible than others. She sat in a wobbly wooden chair the whole evening due to back pain, resulting in an entirely acoustic set; it’s why she commented on the singularity of the show.

It may not have been the traditional Big Thief set, but Lenker’s natural charisma and sullen strength are undeniably magnetic. It felt like the 1,700-person theater morphed into an after-hours Greenwich Village folk bar, and the band was able to command the attention of the crowd for nearly two hours. Throughout the night, the group played a combination of fan favorites from their five studio albums and a healthy serving of unreleased music

Big Thief is one of the hottest bands on the indie circuit right now; they were called “one of the most salient acts of the twenty-tens” by The New Yorker. Their newest album, Dragon New Warm Mountain I Believe in You, is a 20-track, winding, epic of dream-rock-country-folk fusion. It’s their best album yet, and it has critics comparing it to the Beatles’ White Album. Hyperbole aside, Saturday evening at Royal Oak Music Theatre housed a performance of one of the best bands in music, at their peak, and in their element.

Lenker was right about this show, though. It was unique. In addition to the wholly acoustic performance, setlists from previous performances this tour note that the band has been playing an unreleased track or two on occasion. But, on Saturday night, they played four new tunes — “Once a Buncha Times,” “Anything Goes,” “Wanted You to Stay,” and “Sadness as a Gift”.

If the new music tells us anything about the band’s new material, it sounds like Big Thief is diving deeper into its country and Americana sensibilities. Lenker’s songwriting — her best skill — might be getting even better, evidenced by lines like, “You pull on my shoe strings, and you open my brain,” from “Once a Buncha Times”. The music feels just as at home in a 100-year old ballroom as it does at a campfire in midwestern backwoods. It can be difficult to keep a crowd’s energy up while performing songs they don’t know, but the fans were tuned in. They audibly appreciated the new tracks, roaring in applause after several of the songs.

Jameson Draper
Adrianne Lenker said a back injury caused her to perform an acoustic set from a wooden chair at the Royal Oak Music Theatre.

The show-stoppers, though, were the tracks the band performed from Dragon New, namely “Spud Infinity'' and “Red Moon”. Both tracks — warbly, fantastical, and heavy on bluegrass influence — were powerful and anthemic live, taking on a new life that doesn’t exist in the studio recordings.

The show’s opening act, Kara-Lis Coverdale, was a unique choice. An experimental electronic artist, her musical style is a far cry from Big Thief. She stood in a white gown, entirely backlit by blue spotlights, and kept her head down for the better portion of her performance. The set was marked by waves of intense, confrontational and harrowing sounds, patched together by ambient noises reminiscent of the Eraserhead soundtrack. One would think it impossible to ignore, yet the crowd was much less engaged than they were during the headlining set.

It’s not uncommon for that to happen, but it’s notable, because Lenker went on Instagram earlier this week to complain about people talking during the opening act. It seems people missed the memo.

"When music is happening in a room," she said, "and there's a performer onstage playing and doing their craft, when you enter into that space, try to be mindful of what's happening, and pay attention, and don't talk."

Big Thief continues their tour Monday night in Chicago, before heading west and then embarking on a European tour this summer. They have not announced any plans for their next project.