Send a News Tip
After just barely getting to New Dodge Lounge in time to see the end of the Meltdowns, I got to catch Dan DeMaggio of his City Chicken Orchestra before he went onstage. Dan, quite rightly, gave me a hard time about the description I used of his group in the paper ("Boozy spoken-word blowhard Dan DeMaggio hurls his song-poems at the audience to gentle musical accompaniment.").

According to DeMaggio, what irritated him wasn't that it was inaccurate. He conceded his blowhardosity and booziness. “But, ‘song-poems’? Who the hell wants to go see ‘song-poems’? Especially when they're being hurled at you?"

Well, the good news is that plenty of people stayed to hear them. Not exactly a packed house, but, with the exception of those of use who love DeMaggio's ravings, the taste for DeMaggio is an acquired one. All went well enough, at least until Dan announced he would read "East Side," a piece he read a few years ago at Motor City Brewing Works' This Week in Art series. Soon, local trapsman Charlie McCutcheon was standing there in disbelief, finally sitting down on the stage. A woman stood in front of DeMaggio, looking ready to throw a drink in his face before leaving, flipping the bird as she walked by the bar's window. Hell, even the New Dodge shut down his spotlight a few times before he finished up with a rousing rendition of a song by Roxy Music. Maybe not the most distinguished night of entertainment in Hamtramck this past weekend, but DeMaggio deserves props for risking shame, insults and the occasional drink in the face for his art, and for our entertainment. 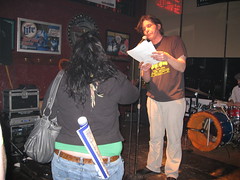 Perhaps an irate East Sider? She appeared to be flipping Dan DeMaggio the bird as she left. 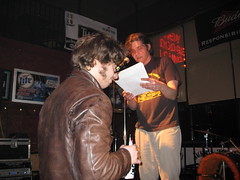 Charlie McCutcheon looks on in disbelief as DeMaggio reads more of "East Side." 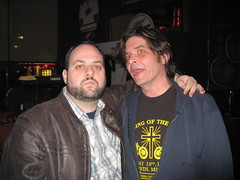 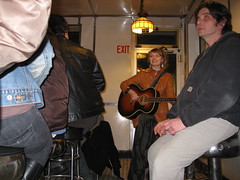 DeMaggio basks in the glory while Jennie Knaggs sings an impromptu song about "chili fries" at the Campau Tower, a fitting end to Blowout.