Photo by Serena Maria Daniels
Latinos for Trump founder Marco Gutierrez's warning of #TacoTrucksOnEveryCorner has resulted in the most delicious form of political protest straight out of southwest Detroit.

Proprietors of the Taco El Caballo truck rolled up outside of Great Faith Ministries Church on Saturday to express their opposition to Republican presidential candidate Donald Trump (and sell tacos).

While Trump was attempting to appeal to black voters, the taco truck owners, husband and wife Jose Badajoz and Nancy Paz, wanted to use their business as a vehicle for discourse about immigration policy.

In doing so the duo became instant viral internet sensations, adding to the countless memes all over social media and analysis on the nationwide economic implications of "an explosion of trucks at that scale." Their appearance was first Tweeted by Michigan Radio's Rick Pluta, got picked up by NPR, and eventually Buzzfeed.


Parked at a corner near the church @realDonaldTrump will visit pic.twitter.com/QHau7SpCNB

We caught up with the couple as they were busy vending tacos from their usual post in a lot on Springwells at Longworth, a few hours after their now famous trip.

Paz tells us she and her husband heard about Gutierrez's divisive comments over the past few days and thought taking their business to the church would be perfect for both taking a standing during this historic election season and drum up business.

The two have been running their taco truck on the same street corner for the past eight years. The parents of four usually wake at 6 a.m., get the kids off to school, and work through the day until 9 p.m. (later depending on demand from the late night crowds).

Photo by Serena Maria Daniels
The couple immigrated to the United States from Guadalajara 12 years ago, first to Oxnard, Calif., where they worked mostly in the service industry.

At the urging of a relative, Badajoz and Paz moved to Detroit, where they were told there would be more opportunities for them.

And success they found. When we stopped by, customers of all stripes stopped by Tacos El Caballo, many of them scarfing down their orders on the spot in their cars.

The menu at this spot is simple, made up of tacos, quesadillas, tortas, burritos, and tostadas - all of which are topped with choice of carne asada, pork (al pastor), head, tongue, pollo, or chorizo. We tried three tacos ($1.50 each), one with lengua (tongue), another al pastor, and the other chicken - all some of the best we've had around town. 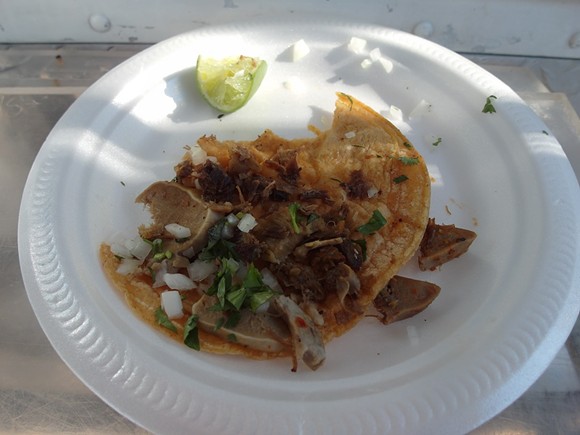 Photo by Serena Maria Daniels
Taco de lengua
Badajoz is in charge in the kitchen, while Paz handles shopping for supplies and ingredients, picking up the kids, and running things when her husband travels to Mexico.

Badajoz and Paz represent the roughly 24 percent of all entrepreneurs in the country who are immigrants - a much high share than non-immigrants, according to a recent study published by Wellesley College labor economist Sari Pekkala Kerr and Harvard Business professor William Kerr.

Whether those businesses produce jobs (as Trump repeatedly lays claim to) or provides for individual families, as evidenced by the Tacos El Caballo, is besides the point.

"Yeah, we work making tacos, pero (but) they're good tacos," Paz tells us.

Good tacos, indeed, and also a reminder of the contributions of immigrant entrepreneurs all over the United States. 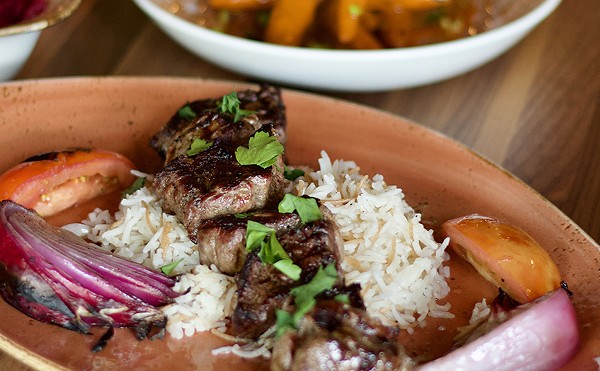