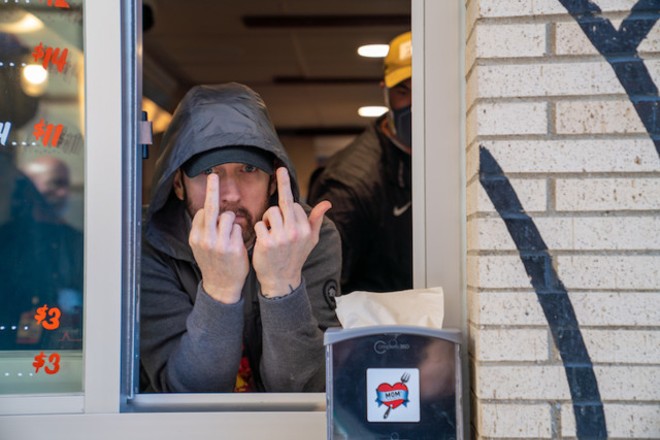 Joe Maroon
Eminem at the grand opening of his Detroit restaurant, Mom's Spaghetti, in September.

Bengals guard Jackson Carman has some dining recommendations for those visiting Detroit, and eating at rapper Eminem's recently opened Mom's Spaghetti (yes, that is the restaurant's real name) is not one of them.

During the Bengals vs. Lions game Sunday — which the Bengals handily won 34-11, their first "back-to-back road win since the 2015 AFC North title season," says bengals.com — Carman unexpectedly left the field during the third quarter.

The Bengals tweeted it was due to an "illness" and his return was questionable.

No. 79 Jackson Carman has been taken into the locker room with an illness. His return is questionable.

Carman apparently barfed on the field, but was able to walk himself to the medical tent, according to Bengals fan site Cincy Jungle.

Some speculated it may be COVID-related since he had just come off the NFL's COVID reserve list on Friday.

But Carman cleared things up when he tweeted he "would not recommend eating Moms spaghetti when you visit Detroit."

Would not recommend eating Moms spaghetti when you visit Detroit.. 😅

We take you back to Saturday, Oct. 16 at 6:50 p.m. when Carman fatefully asked Twitter for suggestions on what to eat in Detroit. Some of the top few comments suggested “Mom’s Spaghetti.”

Just a mere 24-ish hours later, that spaghetti would allegedly be on Ford Field.

Eminem opened Mom's Spaghetti at the end of September. The rap star previously hosted a similar pop-up in 2017 to celebrate the 15th anniversary of his film 8 Mile and the new eatery is an expansion of that.

The restaurant name refers to a lyric in Eminem's "Lose Yourself," where he mentions throwing up the titular pasta: "His palms are sweaty, knees weak, arms are heavy/ There's vomit on his sweater already, mom's spaghetti."

Carman didn't say what he ate, but here's what a container of Mom's Spaghetti looks like before it comes back up: 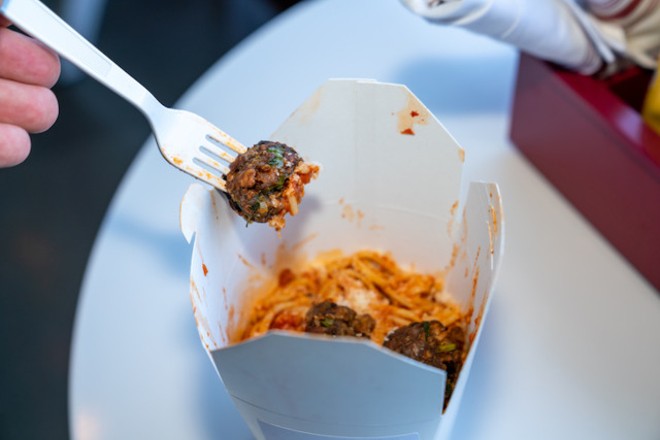 On Monday afternoon, after this story was published and likely reached Eminem's people, Carman took to Twitter to clarify that he did not, in fact, eat Mom's Spaghetti.

"FYI: I did not actually try the Moms Spaghetti Restaurant while I was in Detroit, I was referencing the @Eminem song lyrics," he wrote.

FYI: I did not actually try the Moms Spaghetti Restaurant while I was in Detroit, I was referencing the @Eminem song lyrics. 🤰🏽🍝🤮🧥


A version of this story was originally published by our sister paper Cincinnati CityBeat. It is republished here with permission. This story has been updated with a follow-up tweet by Jackson Carman saying that he did not, in fact, actually eat Mom's Spaghetti.