The best of Ann Arbor beer 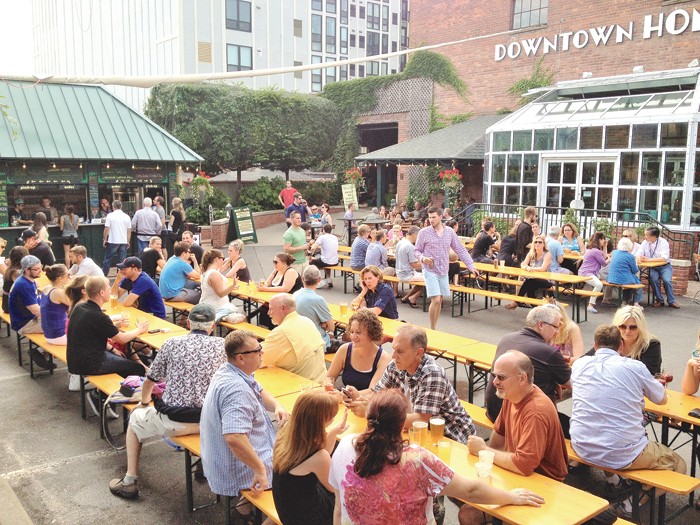 “Ann Arbor has always been a beery town,” says David Bardallis, resident beer geek and author of Ann Arbor Beer: A Hoppy History of Tree Town Brewing. “Historically, the German roots played a large role in Ann Arbor becoming a beer-loving town. Everybody knows that where there are Germans, there is beer and breweries.”

It doesn’t take a visitor long to notice the ever-present bouquet in the air of malt and hops thanks to numerous craft beer bars, brewpubs and microbreweries. Throw in a few stellar beer gardens and it becomes patently clear that this town belongs on every beer lover’s list of must-visit burgs.

The first brewpubs to set up shop in Michigan, Arbor Brewing (114 E. Washington St., 734-213-1393, arborbrewing.com) and Grizzly Peak are in Ann Arbor, explains Bardallis, and both warrant a call. The cheery little Arbor pub is the kind of place where beers change hands over lost games of darts, and real ales are pumped by hand. At Grizzly Peak, more adventurous pub fare merges with high-quality house-brewed beer.

Jolly Pumpkin (311 S. Main St., 734-913-2730, jollypumpkin.com), which also maintains a larger production brewery in nearby Dexter, was one of the first breweries in the country (along with Arbor) to focus on sour beers — and they rank among the best in the biz. This bustling multi-level pub is ground zero for fresh-brewed sour ales, which can be sipped by starlight on the rooftop deck.

There are few greater joys than savoring a cold beer in a warm beer garden, and Ann Arbor is blessed with two incredible — and incredibly diverse — examples. The new-school Bill’s Beer Garden (218 S. Ashley St., 734-369-8001, billsbeergarden.com) is an urban oasis that materializes out of thin air each evening in the parking lot of Downtown Home & Garden. The lineup of Michigan craft beer (and wine) changes, but the vibe — eclectic and chill — is a constant. Just three days a year, the last Saturday in June, July, and August, the German Park Recreation Club (5549 Pontiac Tr., 734-769-0048, germanpark.org) opens up its leafy grounds to the public. Founded in 1938, the club is as old-school as you can get. Lines form early to get into this festive scene where German beer, German food and German music and dancing make for a truly memorable and authentic experience.