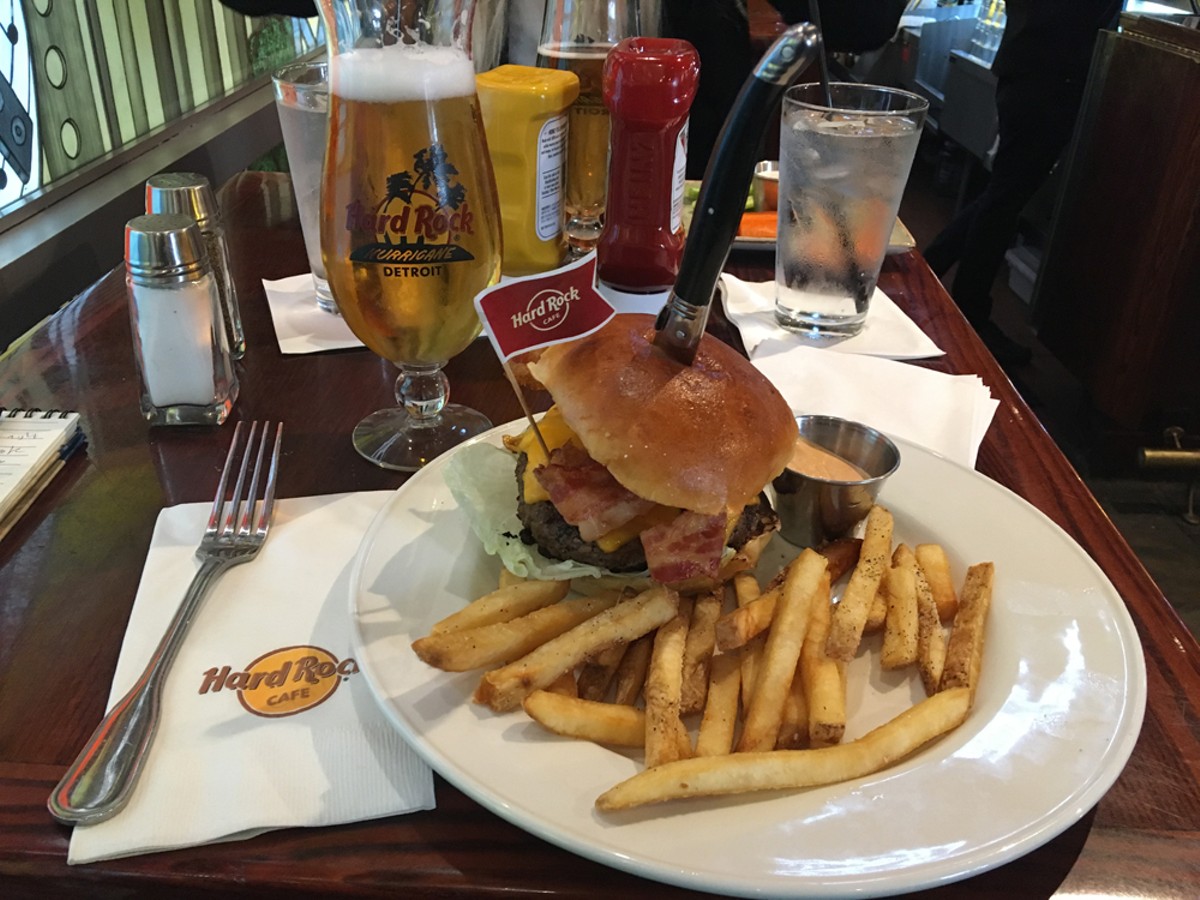 OK, the Legendary Burger wasn’t so legendary. But we still had a rockin’ good time. Lee DeVito

When we heard downtown Detroit's Hard Rock Cafe was calling it quits after 15 years, joining the recent closures of other Hard Rock locations nationwide, we were ready to dance on its grave.

We figured Hard Rock was just another victim of the dreaded millennials' well-documented distaste for chain restaurants, and to us it seemed there was perhaps no greater symbol of the phenomenon. At the Detroit location, which we had not been to in more than a decade, there is even a stained glass mural rendered with the likenesses of Kiss and Motown acts — as if the restaurant itself were a temple erected to immortalize the bygone youth of the Baby Boomers. We thought we'd go in when the spot was empty to snap photos of the rock memorabilia on its walls for a slideshow gallery on the Metro Times website, and maybe have a bite and lampoon the whole thing.

Readers, we stand corrected. We were wrong. We had a great time, and we will miss the Detroit Hard Rock Cafe.

For one, we thought it would be dead on a recent December weekday afternoon. In fact, the restaurant boasted a sizable attendance, with a mix of people who appeared to be Quicken Loans employees enjoying happy hour and families visiting Campus Martius Park for the holidays. The spot was at least half full. In fact, our waiter said that business has been booming since the restaurant announced its closure in late November — as if it were an aging rocker on a farewell tour. Both our hostess and waiter wistfully lamented the impending end of their "fun job."

Another theory that was proven false was that the restaurant would be a relic of the past. Again, we are humbled to report that we were wrong. The Hard Rock Cafe's definition of rock music was surprisingly broad and diverse: The videos played on the restaurant's plentiful TV screens ranged from staples like Bob Dylan, the Bee Gees, Elton John, and Motörhead, but also more recent acts like Amy Winehouse, a Tribe Called Quest, Death Cab for Cutie, MIA, and Courtney Barnett. Plenty of restaurants offer a curated music experience, but my co-diner and I found the Hard Rock Cafe's playlist to be refreshingly eclectic and unpretentious.

It's also worth pointing out that the menu had apparently been updated to incorporate newer tastes, featuring items like the newish meatless Impossible Burger. That said, the menu is still largely what you'd probably expect. This is a chain restaurant, serving standard-issue American fare — burgers, fajitas, steak, mac and cheese, chicken tenders, and so forth, at slightly higher than usual prices. We spent $11 on domestic beers that came in a souvenir glass we could take home, but our waiter said that regular shipments of supplies had stopped once the closure was announced, so they came in Hurricane glasses as opposed to the typical pint glasses.

I ordered the "Legendary" burger, a $14.95 ½ pound patty that comes with lettuce, tomato, smoked bacon, cheddar cheese, and an onion ring. I'm willing to chalk the sad, pale leaf of iceberg lettuce that arrived on the burger up to that aforementioned shipping snafu. I was also surprised by the moderate portion of fries — typically it seems like chain restaurants tend to serve such outrageous portions as to require a doggy bag, especially at that price. Otherwise, it was a pretty forgettable corporate chain restaurant hamburger. Look, we already admitted we didn't come here for the food.

My co-diner's $10.95 Buffalo-style cauliflower "wings" hit the spot, however.

After our meal, we did a lap to check out the Hard Rock Cafe's trove of rock memorabilia hung on the walls, which included stuff from Detroit artists like a dress worn by Diana Ross, track pants and a bandana worn by Eminem, and a guitar signed by Kid Rock. The hostess said the restaurant was trying to find a buyer for the stained glass mural, a one-of-a-kind Detroit-themed piece created specifically for this location. Otherwise, she said the rest of the items would be sent back to the corporate parent company's collection of rock memorabilia, the world's largest, to be redistributed among its other stores.

Indeed, despite recent closures in cities like Toronto, Cleveland, and St. Louis, the chain still owns 185 cafés, 25 hotels, and 12 casinos across the globe. Further disproving our hypothesis that the restaurant was struggling, our hostess said the Detroit location was even recently considering a remodel, which was only canceled after the building owner chose not to renew the lease. That, of course, would be Dan Gilbert's Bedrock Detroit, which acquired the building in 2014. Apparently Bedrock has other plans for the space.

In a statement, the Hard Rock Cafe said it hopes to open a new location elsewhere in metro Detroit. Hopefully, they find a new home — and rock 'n' roll will never die. Until then, the downtown restaurant's last day is Jan. 26.

Leyland "Lee" DeVito grew up in the suburbs of Detroit, where he read Metro Times religiously due to teenaged-induced boredom. He became a contributing writer for Metro Times in 2009, and Editor in Chief in 2016. In addition to writing, he also supplies occasional illustrations. His writing has been published...
Scroll to read more Restaurant reviews articles