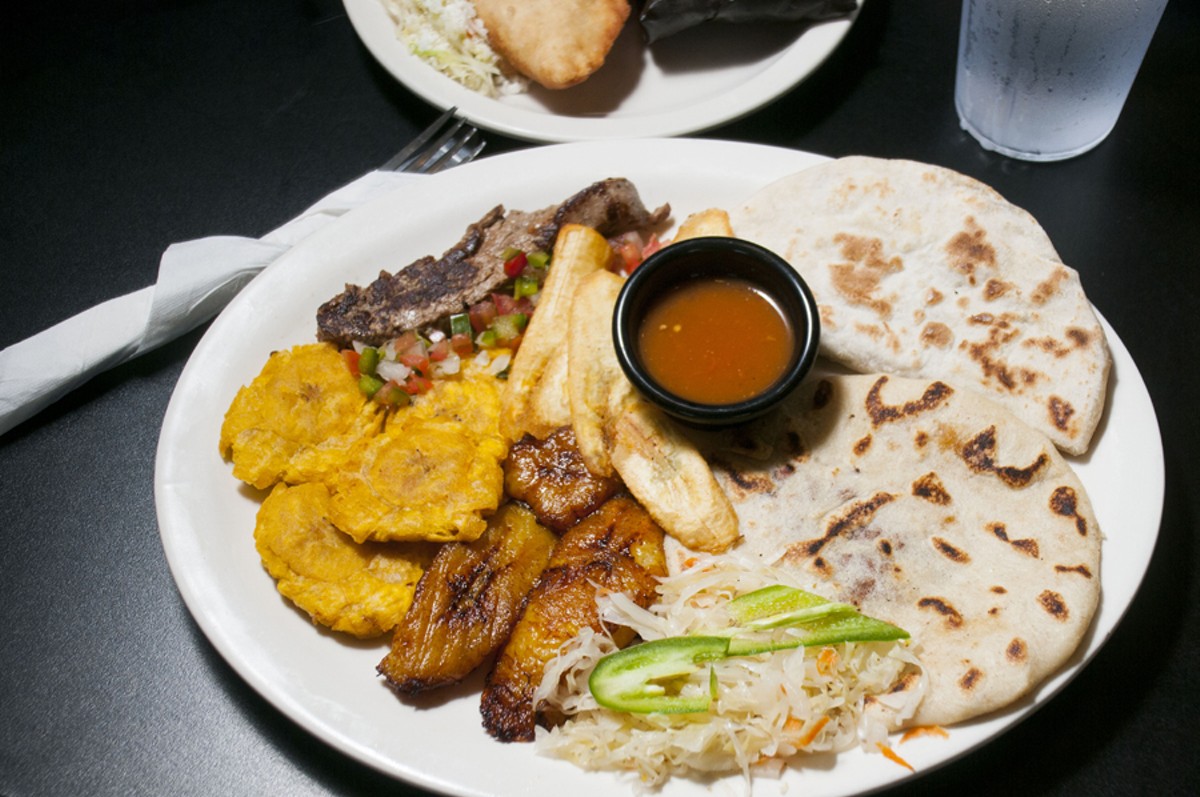 Go figure: a restaurant in Southwest Detroit that's looking for more Mexican customers. Obed Hernandez and Sandra Padilla, owners of 7-year-old El Catracho, say they get more traffic from Central Americans, Puerto Ricans, Dominicans, and gringos (my word, not theirs) than from Mexican immigrants. They moved to their current location near Clark and Vernor last December, to be closer to the heart of the community than their old place on McGraw.

Hernandez, who's from Veracruz himself, and Padilla, from north central Honduras, believe Mexicans want spicier dishes. But chief cook Padilla is sticking to what she grew up on: pupusas, baleadas, pastelitos, and super-rich tamales.

I hesitate to call such delights "snacks," because a couple can fill you up real quick. But the prices are snack-like, and although El Catracho ("The Honduran") offers a list of dinners ranging from chicken through pork and seafood to beef, these smaller treats are what customers gravitate toward.

Most popular is the $2.25 baleada: a flour tortilla filled with lightly scrambled eggs, beans, and some tangy cheese, folded over and toasted slightly crisp. Some folks order 10 or 20 to go, and they will always be handmade fresh, "nothing from the refrigerator," Hernandez says. Chorizo, steak, chicken, avocado, sausage, cheese — anything can be added.

I found the baleada quite satisfying, but to really take advantage of what's different about El Catracho, you must order something made with hand-patted corn tortillas. They don't have much in common, texture-wise, with store-bought. They're thicker, softer, cornier. All corn tortillas are handmade that way: "every day, every plate," Hernandez says.

Also labor-intensive, and a heart-warmer, is the atol de elote (corn). This thick, pale yellow, hot breakfast drink is most popular in the winter, for obvious reasons. To make it, Padilla grinds corn and pulverizes it in a blender with milk, sugar, and "tres dedos" — three fingers, a tiny pinch — of salt. A stick of cinnamon is added. Feels and tastes like a mother's love.

Horchata is multi-step, too: rice, morro seeds, and cinnamon are roasted and then whirled in a blender with water and milk. Morro seeds are the secret ingredient (but not so secret in Central America) to a good horchata.

One of my favorites was the $3.99 platano campesino — a ripe plantain split and stuffed with crema, beans, and cheese. This is on the breakfast menu, which is served all day and evening. Add ground beef to make it more savory than sweet.

Pupusas are a mainstay, of course — just a tortilla closed around lots of choices of filling, including chicharrones, the loroco plant or even jalapeños (for those who do want spicy). They come with big jars of marinated cabbage and marinated red onions, the latter quite hot. The pastelito is similar to a pupusa but more interesting because it's deep-fried — good and crisp but not greasy.

As always in a Central American restaurant, tamales are stand-outs. And cost $2.25. Hernandez was blatantly disloyal to his native land when he described to me the difference between Mexican tamales — dry, small, little stuffing, cylindrical — and those Padilla makes: moist, square, substantial, cooked in a plantain leaf. I tried the shredded pork tamale, cooked with some peas and carrots, and loved the texture of the masa, embued with some pork juice but solidly satisfying on its own. Chicken is the other option. The tamal de elote is different: There's no filling; ground corn is mixed directly into the masa, along with sugar, for a fluffier texture. A few corn kernels escape the grinding and add their goodness.

Platanos (plantains) are ubiquitous in Honduras, as in some of the Caribbean islands: Thus, the Puerto Rican and Dominican customers. Hernandez and Padilla cook them two ways: ripe and green. Maduros (ripe) are the sweet treats we've grown to love, served just with crema or as an accompaniment to any kind of meat. Tostones (green) are fried slices that, to my taste, have little flavor. (It seems every culture has a really bland comfort food that the natives swear by.) And then tajadas are green bananas, also sliced and fried, also bland. They're served with a mayo-ketchup-garlic sauce that does not redeem them. In this gringa's opinion, anyway.

On weekends, Padilla and her helpers cook up three fresh soups that are each whole meals: tripe and coconut milk; beef with yuca and vegetables, including corn on the cob; and seafood. The vegetables in these soups are not diced like Campbell's, they're cooked whole, and it's up to you to figure out how to cut them without splashing. The soups are a better bet than the dinners I tried: a charred carne asada and a whole fried tilapia, quite browned and crusty. No chance of underdone meat here!

"Tenemos el sabor de su tierra" ("We have the flavor of your homeland") says the writing on the window at El Catracho. Hondurans and their neighbors agree.

Note there's no liquor license and a $10 minimum for use of a credit card — and at these prices, you can make a couple of meals before getting to $10.