Breakfast and lunch here are not as opulent as their surroundings, but still mighty fine 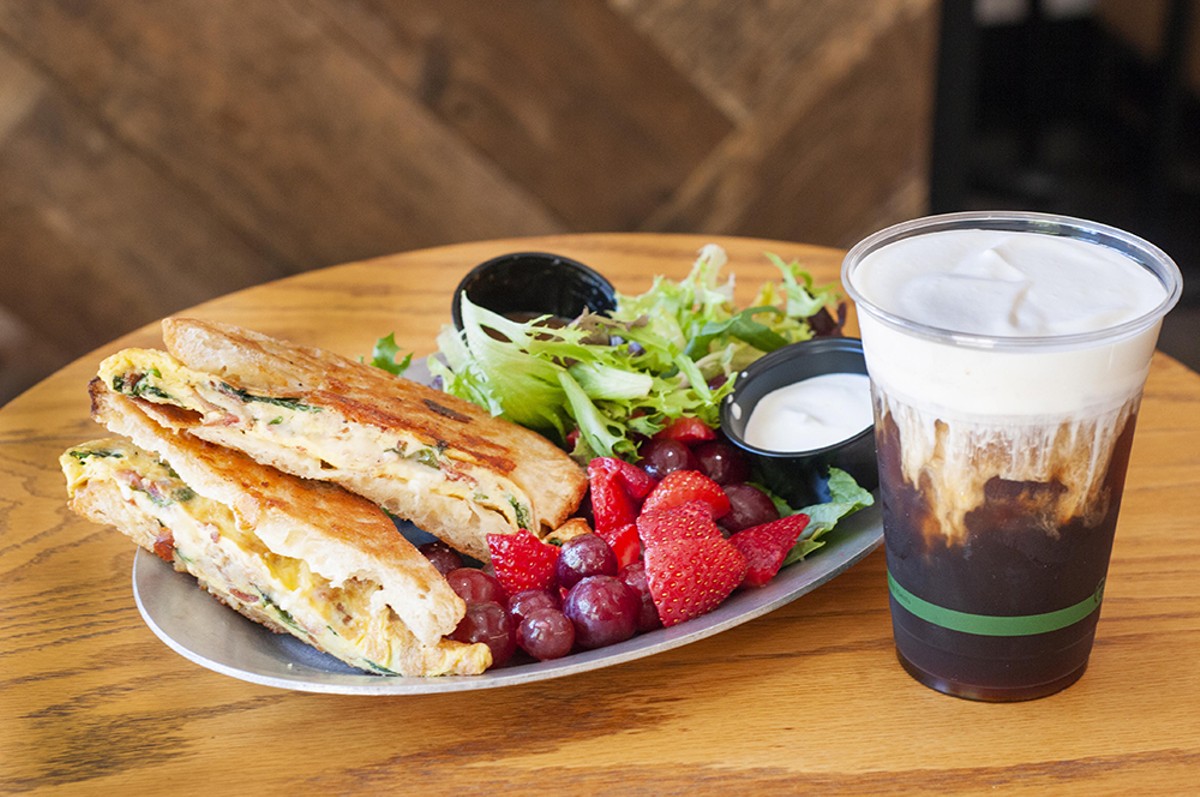 The Fisher Building, where Promenade Artisan is housed, is reason enough to visit. Be sure to wander the halls of Albert Kahn's Art Deco masterpiece before and after. Why don't we make buildings like this anymore? It seems no one wants intricate mosaics with thousands of colored tiles and 40 kinds of marble. Or maybe we've lost the craftspeople who could devote their skills, or the rich people (in this case the Fisher family) who would lavish such cash and attention.

Of course we still have plenty of rich people living in luxury, but would they make a public building this special today? I saw a building named for Bill Gates at Cornell University that looked like an open mouth with unattractive teeth.

“It is grand,” says Promenade co-owner (with husband Jono) Chelsie Brymer, referring to the Fisher. “We all get giddy about it.”

In any case, breakfast and lunch at Promenade (open 8 a.m.-2 p.m. weekdays) are not as opulent as their surroundings, but still mighty fine. Everything is made from scratch in the building's basement kitchen. Most customers are tenants of the Fisher, so service is quick. Breakfast items are made ahead and then warmed as needed; you're not ordering a custom-made over-easy but rather grabbing and, mostly, going, though there are tables for eating in.

I particularly liked a big breakfast sandwich, two crisp halves, grilled and buttery, cheesy and spicy. It's a better buy than the bacon-tomato-feta quiche, which is also delicious but smaller, with lots of flaky crust, soft innards, and prominent tomato.

The large Promenade cinnamon roll is called the Rolls Royce (ignoring the building's American auto heritage) and it's good warmed, though not out of the ordinary. I preferred the blueberry-lemon scone with some icing drizzle; dry, as scones are meant to be, but full of tart flavor. Another scone is  bacon and cheddar; offerings vary. An apple-cinnamon muffin hits the right spice notes and sports a thick crumble topping.

Another breakfast possibility is vegan, gluten-free overnight oats, which are made by soaking buckwheat groats, sorghum flakes, pepitas, and oats in coconut milk, then adding maple syrup and a generous topping of pecans and blueberries. It's a large amount, and dense, a lot to consume first thing in the morning, but tasty.

Many more pastries populate a rotating list, not all of them traditionally for breakfast: Dutch chocolate brownies, chocolate zucchini bread, lemon bars, rosemary shortbread, a vegan lemon cupcake ($4), to name a sample.

It may be odd to compliment a restaurant on the quality of its toasting, but Promenade merits it. For the “Zeb” sandwich, corned beef was stacked high on buttery rye, with lots of purple pickled cabbage slaw. A vegan “Cass Avenue” put some spicy sweet potato, spinach leaves, and red cabbage between crunchy slices. Other options are turkey-cucumber-basil, grilled cheese, or a classic jambon beurre, ham and butter in a baguette.

Diners can pick ingredients from the salad bar, including pasta salad and fruit, or ask for the top seller, a kale Caesar.

Espresso drinks abound; the house coffee comes topped with chilled cream, for a temperature sensation that Brymer swears by. My companion wasn't thrilled with his cold brew au lait because it was flavored with maple syrup; a matter of taste.

On Thursdays patrons can order ahead and take home prepared dinners for four — salad, entrée, dessert — for $40-$45. (That service is on a summer break right now, however.) Past menu themes have included Mexican and Korean bulgogi.

My single complaint about Promenade, a moan that readers have heard me make about so many restaurants, is the vast amount of plastic and paper waste created when everything is triple-packed for carry-out, even when you're eating in. (To be fair, most of Promenade's business is carry-out.) I don't need a bag to take my items a few feet to a nearby table. I don't need to have my utensils wrapped in plastic, only to be thrown away. It feels like disrespect to the food to insist that it be eaten from a clamshell.

Oh to dine from a real plate, with a fork that rests heavy in the hand! Are there no dishwashers in today's restaurants? And are there no billionaires who will hire artisans to create mosaics of eagles in peacock hues? At least at Promenade, you get the mosaics.