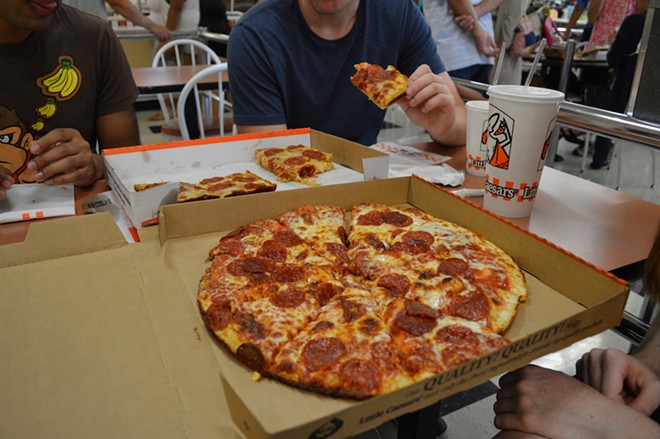 Based on the garb worn by the Little Caesars' mascot, who we have to assume is the Little Caesar, it's perhaps no big surprise that the pizza chain restaurant — and home to the $5 Hot-N-Ready — is the latest to get in on the ever-growing plant-based, meat-free lifestyle. Just look at his deliciously green little laurel wreath!

Anyway, behold! Little Caesars' vegetarian-friendly Planteroni Pizza (we would have called it the "I plan't believe it's not pepperoni pizza," but whatever) debuts in Detroit this week, as well as in four additional U.S. markets.

“We want our customers to set aside their preconceived notions about plant-based meat because this product is really going to surprise them,” Little Caesars' chief marketing officer Jeff Klein said in a statement.

The Detroit-based chain launched the collaboration with artisanal plant-based meat and cheese brand Field Roast, which launched its soy-free pea protein pepperonis earlier this year that are the star of Little Caesars' Planteroni Pizza ($8.49) and the chain's Slices-N-Sticks option, which includes half a Planteroni Pizza and half cheesy breadsticks ($8).

Starting Monday, customers can order either of those menu options, or are invited to choose the plant-based peps as one of their custom pizza toppings.

The pepperonis themselves are described by those who have tested the new topping as being bigger than your average pepperoni and having a texture that was a bit soft, while the seasoning itself accurately mimics that of pork pepperoni thanks to the blend of fennel, cracked black pepper, garlic, and paprika.

While the Planteroni might appeal to vegetarian pizza-lovers, as many have pointed out, the pepperoni is the only vegan-friendly/plant-based feature of the pizza itself as Little Caesars does not yet offer a dairy-free cheese substitution. However, vegans have discovered that you can order the crust, sauce, and veggie/plant-based toppings without the cheese (which sounds pretty sad especially when you consider all the pizza places that offer dairy-free cheese, but do what you gotta do). And, allegedly, you can special-order Crazy Bread without the parmesan cheese to make it vegan-friendly, too.

Little Caesars' Planteroni Pizza is available now to order via LittleCaesars.com, their app, or by phone in select markets.