Evan Gonzalez, Detroit Stock City
Townhouse Detroit. The restaurant's owner signed onto a lawsuit against the former director of the Michigan Department of Health and Human Services to allow restaurants to reopen again.

One month after Michigan restaurants were allowed to reopen for indoor dining, COVID-19 cases are climbing, returning to levels not seen since earlier in the winter.

According to the Centers for Disease Control and Prevention, Michigan now ranks fifth in the nation for most new COVID-19 cases per population over the last week. 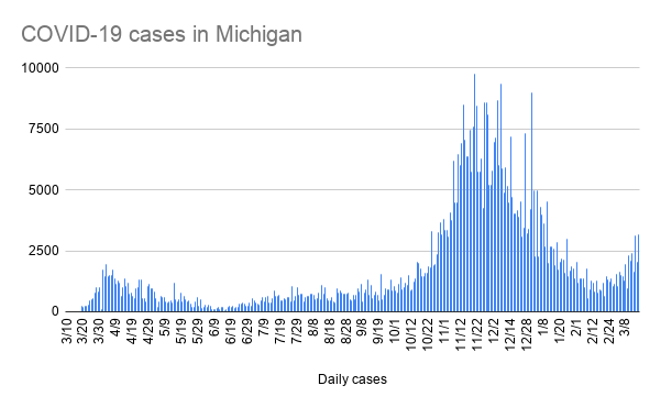 Metro Times
COVID-19 cases have been rising steadily in Michigan for the past several weeks.

Dr. Teena Chopra, an infectious-disease specialist and Wayne State University professor, says it's likely that restaurants are a factor in the rise.

"This could be multi factorial," she says. "Restaurants are one factor. Variants another one, and people are are also letting their guard down thinking vaccines are here."

B.1.1.7, a highly contagious variant of the virus that causes COVID-19 that emerged in the U.K., was detected in people connected to the University of Michigan campus in Ann Arbor earlier this year. B.1.351, a highly contagious variant that emerged in South Africa and could be resistant to the available COVID-19 vaccines, was detected in a child in Jackson County earlier this month.

"Today's announcement is possible because of our progress over the last two months," Gordon said in a statement. "Even so, the science is clear that unmasked, indoor activities like dining and drinking are still a source of high risk around COVID-19. The safest course remains to support your favorite restaurant with carryout, delivery or outdoor dining."

The state allowed restaurants to reopen on Feb. 1 with restrictions, including a limit of 25% capacity or 100 people, whichever is smaller, as well as a 10 p.m. curfew. Only six people can be seated to a table, which must be at least six feet from others, and guests can't interact with people outside of their table. On March 2, the state allowed restaurants to increase their maximum operational capacity to 50% and extend curfews from 10 p.m. to 11 p.m.

But Justin Winslow, the president and CEO of the Michigan Restaurant & Lodging Association, says there isn't enough data to directly tie the rise in cases to restaurants reopening.

"It's interesting that the surge seems to be very Michigan-centric," he tells Metro Times. "When I look at our surrounding states that have been reopened longer and with looser restrictions on restaurants and on variety of other public facing entities, schools and the like, they aren't surging the way we are."

Indeed, Michigan has been identified by the Centers for Disease Control and Prevention as a hotspot for the variants, especially B.1.1.7, which has been detected in Michigan at a far higher rate than neighboring states. 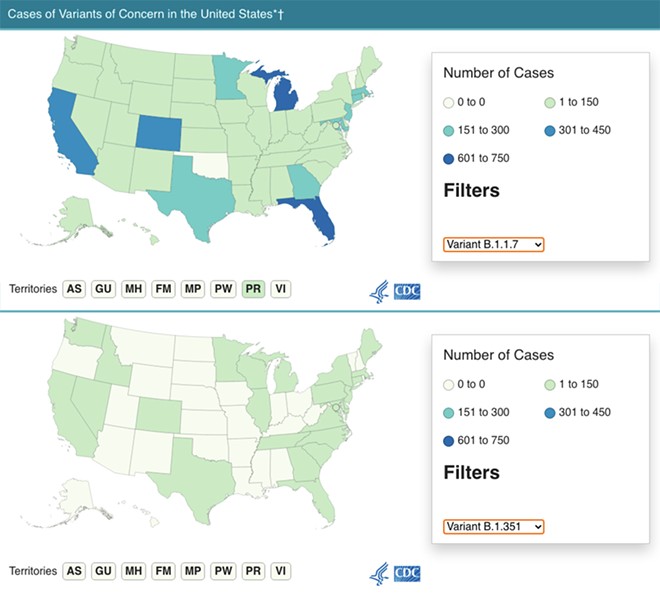 Centers for Disease Control and Prevention
Michigan is a hotspot for two of the highly contagious variants of the virus that causes COVID-19.

Winslow points out that restaurants are now mandated to collect customer information for contact tracing if any COVID-19 cases are linked to restaurants, and while there are five outbreak investigations tied to restaurants, no patron transmission has been linked.

"I'm not going to tell you that zero transmission, period, has occurred at any restaurant, but there is just not even a hint of the data suggested that the transmission that is happening right now is tied to restaurants," he says.

"It's something we've been advocating for a couple of months here," he says. "And frankly, we're starting to hear more from people, the workers in the industry, being more vocal in their requests to be given priority."

Metro Detroiters can now register to get vaccinated at Ford Field, which has been transformed into a massive regional vaccination site. Officials say the facility has the capacity to administer 6,000 doses daily. The vaccine will be offered at no cost, no insurance required.