The owners say 100% of its staff is Detroit residents, with most living within two miles of the restaurant 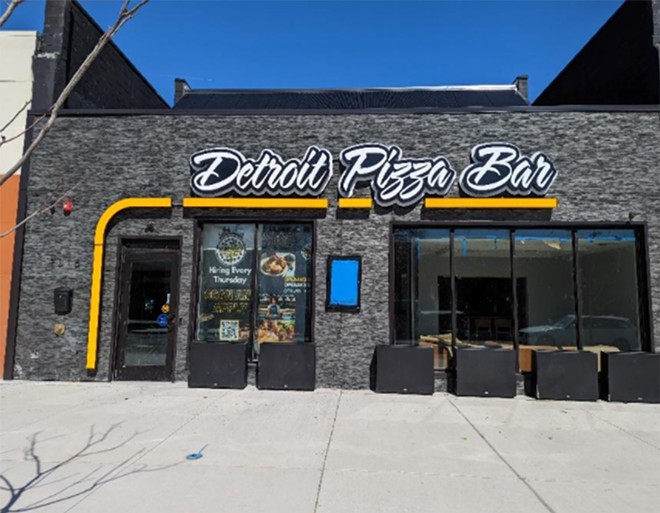 Courtesy photo
Detroit Pizza Bar.
A new pizza spot is getting ready to open in a long-abandoned commercial building on McNichols Road.

The Detroit Pizza Bar will open for a soft opening from 5-9 p.m. on Friday. The restaurant plans to officially open for business on Friday, April 8, according to a press release.

The $1.3 million Black-owned restaurant was opened with funding from the Strategic Neighborhood Fund, a public-private partnership aimed at improving 10 neighborhoods throughout Detroit.

"When developing in corridors like Livernois-Six Mile that have traditionally struggled to get funding for projects, the Strategic Neighborhood Fund has become an indispensable resource, because they allow both the redevelopment and the stabilization of long-forgotten commercial thoroughfares," Detroit Pizza Bar co-owner Marcus Jones said in a statement. "The SNF has helped my partner Akunna Olumba and I not only open our business but help make a difference on this stretch of McNichols."

The owners say they have created 20 jobs, with 100% of the staff Detroit being residents, and 97% of them living within two miles of the restaurant, and plan to hire more. They also say they want to keep as much money in the community, and plan to work with local farmers.

Located at 7316 W. McNichols Rd., the 4,500-square-foot spot also has a rooftop terrace for the warmer months.

The $150 million Strategic Neighborhood Fund project was announced by Mayor Mike Duggan in 2014 and is led by the nonprofit Invest Detroit and funded through six corporate funders and philanthropic organizations. It initially started in three neighborhoods and has since expanded to all seven of Detroit's city council districts.

"Invest Detroit is thrilled to support Legacy City Group in bringing a great restaurant and job resource to this neighborhood," Invest Detroit executive vice president of lending Keona Cowan said in a statement. "Detroit Pizza Bar is a wonderful addition to the redevelopment of this key commercial corridor that is largely being led by some of Detroit's most talented Black developers and business owners."

The opening comes on the heels of a $7 million streetscape overhaul of McNichols that includes new bike lanes, parking lanes, sidewalks, and other features. A similar project was completed on nearby Livernois Avenue.

"We created the Strategic Neighborhood Fund to strengthen neighborhoods and to help revitalize the commercial corridors that serve them," Mayor Duggan said in a statement. "The business growth we've seen on Livernois has been tremendous and with the help of strategic SNF investments in businesses like the Pizza Bar, we are seeing the same thing start to happen along McNichols. I’m so proud of Akunna and Marcus for the incredible transformation they’ve made to their new space.”

More information is available at facebook.com/detroitpizzabar.