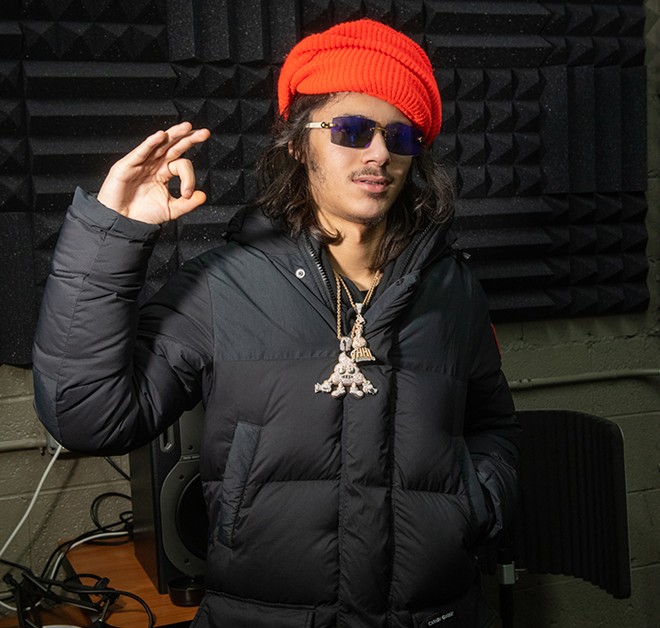 Kahn Santori Davison
In four short years, BabyTron has gone from an aspiring teenage rapper to one of the most intriguing and analyzed emcees in the digital sphere.

If you've ever been invited to Lando Bando's Hip-Hop Lab, that means your life is definitely going in the right direction. The former Metro PCS phone store on Nine Mile in Warren now serves as a dedicated workspace for Bando's weekly podcast, and is also home to his music label the Hip-Hop Lab Records. Some of the multifaceted facility's most distinguished visitors include rappers Rio Da Yung OG and Peezy and actor T.K. Kirkland, among others.

"I knew if I was going to be signing artists, I needed a hub where they could all come and create," says Bando. "And I feel like it's important to have some type of family aspect. That's always been my goal from when I first started."

It's also home base to Bando's top artist, James Johnson III, known to the music world and internet as BabyTron (a moniker he's gone by since he was 12 years old). When we meet him there, he's dressed in a black Canada Goose jacket, Crocs, and Buffs, sporting a mustache somewhere between peach fuzz and a painter's brush, and the hair coming from under his orange beanie hat is giving him an old-school Dave Grohl look. "It's just the winter right now," Tron says with a smirk. "I don't plan on growing it out forever."

In four short years, Tron has gone from an aspiring teenage rapper to one of the most intriguing and analyzed emcees in the digital sphere. Now 21, he already has several Twitter "stan" accounts, he's a Reddit favorite, and has been lauded by just about every music magazine still in publication. (Rolling Stone stated he was "definitely in a universe of his own.") He counts Detroit rapper Big Sean as a fan, as well as NBA players Kevin Durant and Miles Bridges. He even has a current bet (made via Twitter) with Indiana Pacers center Myles Turner that nets him $100k if he gets a Billboard Top 10 single before Turner makes an NBA all-star team.

To make sense of all of this, you have to look at what Tron's not before you understand what he is. He's no backpacker with a JanSport full of rhymes rapping over boom-bap beats. He's also no Detroit trap rapper from either the east or west side chasing that Detroit sound the whole country is seemingly getting high off of. Sure, there's a little bit of early Eminem sarcasm to his flow, some Danny Brown dark humor in his bars, and a whole lot of internet-born, Gen Z originality in his approach. But in fact, Tron's musical identity isn't necessarily anchored to a region — it's just his music. Simply stated, BabyTron is a different type of different.

Tron grew up in Ypsilanti playing basketball and listening to Detroit-area rappers like Doughboyz Cashout, FMB Deezy, Team Eastside, and Bandgang. His dad was a hip-hop head, rapper, and friends with Violent J from ICP. "They were cool through the music," Tron says. "They knew each other from the studio."

After junior year, Tron decided it was time to forgo his hoop dreams. "It was just what to do at the time to stay out of trouble," he says. "As I got a little older I just started rapping. I felt like I wasn't going to put the work in to go to the NBA, so I put the work into rapping."

Hip-hop started off as simply amusement for Tron, something to fill the void that afternoon basketball practices and weekly AAU tournaments had left open. "Me and my friends were just having fun," he says. "They was fucking with it, so really it was just a push. People liked us, so we kept going with it. We would be at my man Stan's house. He had a mic in his closet and we would shut the door and start working."

Tron, Stan (who goes by StanWill), and friend TrDee would form the ShittyBoyz rap group. "Being 'shitty' was just good at the time," Tron explains. "Being crispy, throwing on some clothes, and being the shit."

The trio began dropping music on their YouTube channel, making the proverbial big splash when a Michigan-based social media channel Richtown Magazine released visuals for their single "GameBreaker" in 2018. "It just blew up from that," Tron says. The visual put them on Bando's radar, and he invited them to participate in an online contest he was sponsoring for aspiring artists.

"It was on Instagram," Bando says. "People had to post their videos. The artist who got the most interaction from fans with their video, I was just going to work out something with them where we would be working together more one on one."

The ShittyBoyz won the contest, signed to Bando's label, and also made him their manager. "It just made sense," Tron says. "I feel like every good artist needs a manager. You can't handle everything on your own, it's just too much going on in life. We just built a relationship and figured out a way for it to make sense."

"What really made me want to sign him right away was when I put him in the studio," Bando adds. "The group the ShittyBoyz, including BabyTron, the first time they did like three or four songs in an hour. That was almost unheard of."

"GameBreaker" is powered by a fast-moving synthesized '80s rhythm. It's one of those beats that makes you want to pull out your Atari 2600, bust a windmill, and hit Northland roller rink — as if Tron tapped into the DNA of Detroit's yesteryear and made it fresh for a new audience.

The production style has become a signature sound for Tron. "We was just trying to find our sound, and it was the old-school beats," he says. "I was confident because it was different. Nobody was doing it and I knew we had found our sound."

BabyTron's lyrics were also the first time many hip-hop listeners encountered what has been dubbed "scam rap." The name was given to a form of hip-hop that lyrically details credit card fraud and identity theft — illegal ways to make money in a genre that constantly wants to talk about illegal ways to make money. Where other rappers prefer to rap about concocting narcotics in a trap house, scam rappers would rather spit bars about stealing your grandma's credit card number to go shopping in Somerset mall. Detroit rapper Teejayx6 is credited with being the founder of the genre, but BabyTron has been the face of it as well.

"I guess that's what life was at the time," Tron says. "That's what we were rapping about. Now I'm trying to paint a bigger picture than just scam rap. At the end of the day it was a little wave. It ran its course."

Tron graduated from Ypsi's Lincoln High School in June of 2019 and released his first album, Bin Reaper, three months later, his first project with Hip-Hop Lab Records. The album raked in thousands of streams and established Tron as a wordplay magician. "Feel like Clank 'cause you know I keep that ratchet on me," he raps on "Scampire," referencing the PlayStation video game. On "Punch God 2," he raps, "Feel like Clyde Drexler with the slides, bitch, I'm blazing now." Much like a stand-up comedian, Tron looks at sports and pop culture as an endless palette of material to pull from.

"I think it's just natural," he says. "People around me be laughing at my jokes, so I just be going with it. I grew up watching a lot of Dave Chapelle."

His penchant for SpongeBob SquarePants references, beloved in the world of internet memes, have perhaps gotten him the most attention. "That's just the kid in me, bro," he says. "They love that shit, that's why I really do it. They want to hear something they've never heard before."

BabyTron’s penchant for ‘SpongeBob SquarePants’ references, beloved in the world of internet memes, have perhaps gotten him the most attention. “That’s just the kid in me, bro,” he says.

Detroit producer Helluva (who is credited with helping to take Doughboyz Cashout to the next level) produced eight of the 13 songs on Bin Reaper that all encompassed Tron's retro video game vibe. "One day I had a DM from him and was like, 'You fire bro, what's you number?'" Tron recalls. "He said he grew up off that music and he hadn't been excited to work with an artist like that for a long time."

While some artists go into the studio with a game plan, Tron opts to go with the vibe he catches when he walks in. "I feel like I can come up with a good hook, then I'm going to do a hook," he says. "But If I just wanna talk some shit and punchlines, then I'm just going to go all the way through with no hook. ... a lot of it is freestyle."

Tron has shown he can compete in any weight class. He's done tracks with local faves Rio Da Yung OG, Bandgang Javar, Sheefy McFly, and AllStar JR, along with national artists like Lil Yachty. Last year, Tron and The Hip-Hop Lab Records inked a deal with San Francisco-based label and distribution company Empire. That same year, Kayne West requested a verse from Tron for his highly publicized Donda album. While the verse didn't make the final edits of the album, Tron still felt encouraged. "I wish it would have become something more," he says. "It was just motivation to keep going."

Tron says he's committed to dropping as much music as possible. He's released multiple projects since Bin Reaper at a Flash-like pace: Pre-Game in 2020, Sleeve Nash and Back to the Future all in 2020, Luka Troncic and Bin Reaper 2 in 2021, along with five ShittyBoyz projects. (The latest, Trifecta, debuted at No. 41 in February on Apple Music's top hip-hop albums chart.)

In January, he released "Prince of the Mitten," in which he creatively chops and raps over 19 different beats from Detroit hip-hop artists. His latest release is MegaTron, which dropped earlier in March and reached No. 11 on iTunes' top Hip-Hop/Rap albums. On MegaTron's "King of the Galaxy," BabyTron duplicates the same stunt from "Prince of the Mitten." Both songs are like hour-long mixtapes crammed into four minutes each, and Tron vocally mixes up his tempo and lyrically pulls plays from his entire rap playbook.

MegaTron tracks "6 Star Wanted Level" and "Manute Bol" are both bass-heavy melodic trap cuts that incorporate the 1980s space vibe as well. Even though Tron understands the retro sound is part of what sonically makes him stand out, he's careful and conscious not to overly rely on it. "I want to balance it out, but I'll always rap on that techno vibe," he says. "I'll always definitely mix it up."

Moving forward, Tron has been added to this year's Rolling Loud music festival in Miami, and he's headed on tour next month, including an April 20 show at Detroit's El Club.

Tron gives the sense that every time he touches the mic, he just gets better and better, and he promises even more music coming this summer.

"We got BabyTron and ShittyBoyz shows coming," he says. "You might hear an unreleased Tron, some music you've never heard before." 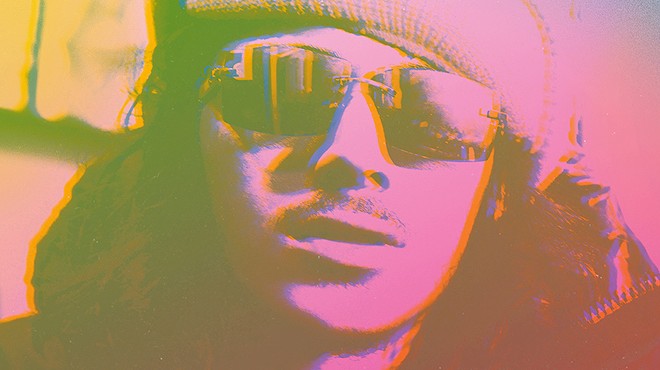