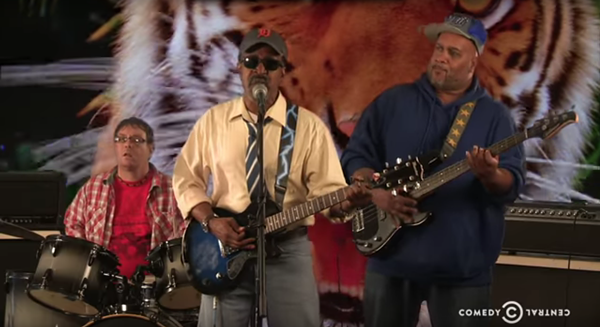 Screengrab
"April in the D!"
Saturday Night Live alum Tim Meadows is set to appear in tonight's season two premiere of Detroiters, as evidenced by a hilarious clip released by Comedy Central.

In the promo clip, Meadows plays Walt Worsch, an attorney in the proud Motor City tradition of awkward personal injury lawyers, and a prospective client of the main characters Tim and Sam's ad agency, Cramblin Duvet Advertising. His motto: "I try my best." He could sure use some help.

Fortunately, Tim and Sam realize he is also a cocksure rock 'n' roller when they stumble upon a YouTube clip of Worsch performing a song for "April in the D" — "that magical month when the Pistons, Red Wings, and the Tigers are all playing at the same time."

Meadows, of course, is a metro Detroit native, in keeping with the show's theme of hiring real-life Detroiters (the show's leads, Tim Robinson and Sam Richardson, are from here). According to The Free Press, none other than real-life attorney Joumana Kayrouz is also set to appear in tonight's episode. (Also, peep that Haute to Death T-shirt Sam Richardson is wearing!)

You can watch the clip below, or read this week's Metro Times cover story interview with Robinson and Richardson here. Season two premieres tonight on Comedy Central with two back-to-back episodes starting at 10 p.m.