Dorothea Hawkins is offended and appalled when a developer knocks on the door of her grandma’s house, offering the family cash to sell the home. With a leaking ceiling and other repairs piling atop exorbitant property taxes, Dorthea’s (aka Dot) grandma has a difficult choice to make — sell and start over or fall deeper into debt to preserve the family’s investment.

While this is actually the plot of a mobile game called Dot’s Home, it mirrors the countless stories of Detroiters being bought out of their homes by greedy corporate developers or foreclosing under the weight of illegally overassessed taxes.

The mobile app was developed by Detroit producer and filmmaker Paige Wood to address housing inequality in urban landscapes. Wood worked in collaboration with the Rise-HomeStories Project, an organization of activists that use technology to tell stories about housing, land, and racial justice.

We meet Dot in modern-day Detroit where a suit-clad representative from a shady organization called “Hope Equity” offers her family a “golden opportunity” to sell the distressed home for above market value. Dot is vehemently against the idea and tells him to beat it, though her grandmother considers the deal.

Her exact words sound like something we’d probably say: “Do we look ‘distressed’ to you? How can you ‘bring back’ a neighborhood that never went anywhere?”

Dot then ends up acquiring a magic key that allows her to time travel to pivotal moments in her family’s past where race impacted their lives.

We see Dot’s grandparents move from South Carolina to find work in Detroit’s auto industry during the Great Migration and buy a house in one of the few neighborhoods where Black people were permitted to live, and Dot’s parents being forced out of the projects when their apartment gets turned into townhomes.

Wood says the game takes place here, not just because she’s a Detroiter, but because of the city’s history of systemic racism, the remnants of which still stand.

“You can see the effects to this day of what that looks like,” Wood says. “We still have the Birwood Wall that is over by Eight Mile as a testament to segregation. There are longstanding examples of how these policies have affected us and especially when we’re thinking about postmodern gentrification, which is what we’re in some ways experiencing now.” 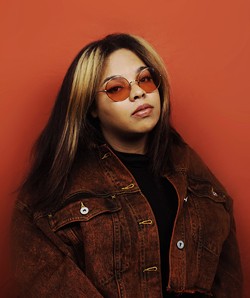 She continues, “With postmodern gentrification, particularly around or after the financial crisis of 2008, there’s this question of do I turn this home that I own into something that can generate profit or revenue for my family or do I give this home to a family member in need to create some long term sustainability for them? This is reflective of something that has actually happened here in this wave of Airbnbs that came to Detroit. In some ways they’re altruistic means of providing for your family, but what does that look like for who you’re pushing out?”

As players move through the interactive game, they choose which advice to give to Dot’s family members — to move out of the city or not, to sell or be one of the last holdout houses.

“Dot, the player, weighs in on what decision there is to be made and that itself affects the ending that Dot and her family will receive,” Wood says. “But we’re not saying as the makers of the game that there’s a right or wrong way to choose.”

In many ways, Dot’s Home is modeled after Wood’s own story. Her grandfather moved to Detroit from Georgia in the 1940s and bought a house, where he still lives today, to start a family. Wood’s parents lived in Detroit until shortly after she was born when they decided to move to Farmington Hills to give her better opportunities. Wood eventually moved back to Detroit, where she lives currently.

Dot’s Home won the cultural impact award in Apple’s 2022 App Store Awards and game of the year at the Games for Change Festival.

“We’ve been really proud of the reviews from players of color, namely Black players, saying ‘I see myself’ whether in the specifics, or in the details, or just the character design… that has been the real pride point for us,” Wood says. “Also, we made a game about housing, which is not everyone’s first thought when making a game, and have been able to get it into spaces these types of games would not normally be in. I’m thinking of white gaming spaces that have looked at this and not necessarily seen themselves, but have had their eyes open to something they maybe didn’t realize before.”

Looking ahead, Rise-HomeStories is planning an in-real-life theatrical experience for Dot’s Home in partnership with Detroit Action that will rely heavily on audience participation for 2023.