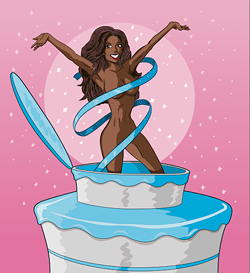 Illustration courtesy Shutterstock
Urban legends die hard, but the tale of Greene's dalliance with Mayor Kilpatrick seems impossible to kill. Now it's the subject of a new play.
The life and times of Kwame Kilpatrick already have the makings of a compelling made-for-TV movie: A charismatic, outspoken young politician makes his bid to lead a beleaguered city and wins, only to have it all end in shame and imprisonment less than seven years later. And that’s just the stuff that’s the easily proven truth.

But what if a dramatic production of Kilpatrick’s rise and fall chose to include every melodramatic accusation, no matter how outlandish? Viewers would certainly be treated to the story of an exotic dancer whose shapely silhouette got in the way of a platitudinous politician’s pious reputation.

As the story goes, in the fall of 2002, Mayor Kilpatrick hosted a wild, drug-fueled rager at the posh mayoral residence, the Manoogian Mansion. Allegedly, party favors included marijuana and cocaine, and guests included 10 police officers, and even then-Attorney General Mike Cox.

According to the legend, stripper Tamara Greene (aka “Strawberry”) was in the middle of giving Mayor Kwame Kilpatrick a lap dance when Kwame’s wife Carlita entered the room. As various tales tell it, Carlita began beating the dancer with her fists, and finally whaling on her with either a table leg, two-by-four, a Louisville Slugger, or a fireplace poker. The stripper was allegedly so badly beaten she had to be picked up by EMS.

Then, in April 2003, Greene was killed in a drive-by shooting while sitting in a car with her dope-dealer boyfriend. The five bullets that killed Greene reportedly came from a .40 caliber pistol, which was DPD’s standard-issue caliber at the time.

If you were wondering why we keep saying “reportedly” and “allegedly” — it’s because people have had the worst luck when they’ve tried to prove the party took place. And even a successful lawyer has been unable to make a compelling case that Greene’s killing was a Kilpatrick-directed effort to prevent her from ever testifying about the alleged party.

But, you know what they say: Never believe anything until it’s been officially denied.

And so it’s axiomatic that so many people believe the party happened, and that what befell Greene was an assassination directed from City Hall. Don’t take our word for it: Look at this informal, unscientific poll that came from the DetroitYES! site:

Screen capture from DetroitYES! site
A poll from about seven years ago, when speculation about the alleged "Manoogian Mansion party" was arguably at its widest.
That perspective seems to be shared by former Free Press scribe Carol Teegardin, who wrote the book (well, a book) about the party, the beat-down, the ensuing cover-up, and the Greene killing: Strawberry, How an Exotic Dancer Toppled Detroit's Hip-Hop Mayor.

That book is now a play, and it’s getting a “world premiere” at the Boll Family YMCA in downtown Detroit starting tonight. The play is entitled “Strawberry — What Party?” and will have six performances over the next week and a half.

We’re probably in good company when we say it’s a real stretch to call this production a “true crime caper” as Teegardin does. But it might be a fair point to note that where fact leaves off, mythology often takes over. And that the mythology of an upstart mayor whose pride, hypocrisy, and libido got in the way of a promising career in politics essentially identifies the sins correctly, even as it takes a detour into what is almost certainly fantasy.