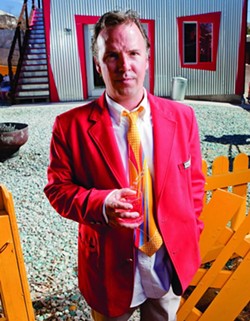 Doug Stanhope: Not in Columbus, Ohio.

Doug Stanhope is close to a living show-biz urban legend, a notorious, near mystical figure, equally known for his relentless, punishing, no-apology style on stage, and for his free-wheeling lifestyle off it. Libertarian leaning, Stanhope has staked out his little corner of the standup universe with a fiercely funny and constantly challenging mind, one that seeks out sacred cows and belts them right in the snout. For a time he seemed to be cultivating a frat boy following; co-hosting The Man Show for a few seasons and appearing in a Girls Gone Wild Video, but his distaste for the Hollywood lifestyle led him to retreat to remote desert town of Bisbee, Ariz. — a stone's throw from both Tombstone, Ariz. and Mexico — a move that only fed his mystic outlaw image. A road warrior, Stanhope is famous for his willingness to appear just about anywhere, anytime, playing dive bars and odd venues some of his peer wouldn't be caught dead in. One of those locales was an abandoned candy factory in Oslo, Norway, where he recorded his most recent DVD release. Equally at home talking porn, politics and philosophy, Stanhope brings his roving one-man carnival into Ferndale this week.

Metro Times: Norway is well known for its great comedy contributions and sense of humor. ...

MT: Could you pick a more awkward audience or weird place to do a show?

Stanhope: We do a lot of weird venues, but that was over-the-top. It was even a bad neighborhood, which you can't even imagine — a bad neighborhood in Norway. When the cab dropped me off in this industrial part of town, I thought, "This can't be right." I never should have let that cab leave.

MT: When you hit a bad neighborhood in Europe, it is distressing.

Stanhope: When that big shooting happened in Oslo it was like, WTF?

MT: Do they even have guns over there?

MT: Some comics go overseas and score points by attacking America, but you went over there and went right after their royal family. ...

Stanhope: I did my time dumping on the states in, like, 2003, when it was appropriate and yet no one else was doing it. Then everybody jumped on the George W. Bush bandwagon, and I'd already burned that out.

Stanhope: I'm doing more of them now that I have a following. I've done a ton of rock 'n' roll clubs where a lot of times it's standing room only, and if you're not in front you can't see the show.

It's not like I'm going to fly to fucking Columbus, Ohio, ahead of time to check out the venue, so sometimes you take a chance. But now, if I can make a deal with comedy club, and I have my audience, then at least they have a seat.

MT: It seems that the Internet has made it possible for comics to find their audience and retail to them.

Stanhope: My fans will show up anywhere, I don't know why more people don't do it. I think most comics are naturally lazy. You just go work the whatever, the "Funnyfucks in Charleston" and they pick you up at the airport, you don't have to think, they take you to radio, you don't have to promote. You get a guarantee so you don't have to worry about selling tickets.

MT: Standup is the hardest, yet least labor intensive job ever

Stanhope: That's why I left L.A. I didn't want to do anything they have to offer. I don't want to do a weaker version of what I do. You get a TV show it's 16-hour days. I'm really good at doing nothing. And I keep getting better at it.

MT: Perfecting doing nothing is the dream of most comics right?

Stanhope: No, I know a lot of guys with ambition and I don't understand it. It's always curious to me when somebody is working on a "project."

MT: Well often, the smarter you are, you just naturally become ambivalent to almost everything. Like "Why am I doing this? This is stupid."

Stanhope: [laughs] I feel that way about standup.