The museum will have a soft reopening and resume abbreviated walking tours starting Aug. 14 Courtesy of Motown Museum
A crowd gathers at the Motown Museum Monday for the unveiling of Rocket Plaza and Hitsville NEXT.

The new developments — Hitsville NEXT, an educational programming and creative hub for emerging artists, and the museum’s new Rocket Plaza — were unveiled at a Monday evening celebration attended by distinguished Motown alumni. The museum had been closed since July 2021 due to flooding and construction.

During the evening of music and spoken word performances, Otis Williams, an original founding member of the Temptations, gifted microphones from his personal collection to the museum. Smokey Robinson spoke about the importance of fostering emerging artists, and fellow Motown superstars Martha Reeves, Shelley Berger, and Duke Fakir were also in attendance.

Hitsville NEXT will offer workshops and programs designed to inspire the next generation of Motown. Anchored in three historic buildings along W. Grand Boulevard, Hitsville NEXT features recording pods and a community activation space for young talent to explore their creative passions.

Rocket Plaza will serve as an immersive welcome destination for museum visitors that will be activated with performances by local talent. The plaza’s colorful flowers, park benches, and pop-up performance stage create a hang-out spot inspired by a time when acts like Smokey Robinson and the Miracles, the Supremes, the Temptations, and so many others would congregate in front of Motown back in the day. 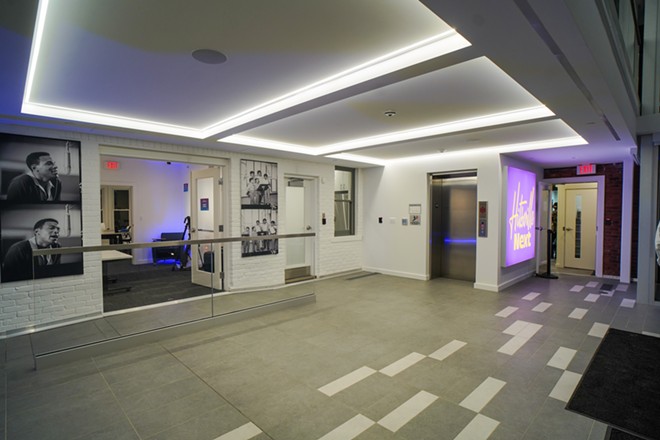 Courtesy of Motown Museum
Inside Hitsville NEXT.

“The vision for this ambitious project that was first announced in 2016 — and that so many generous and committed supporters have contributed to — is now a reality,” said Motown Museum Chairwoman and CEO Robin Terry in a press release. “Not only are we back — but we are back, bigger and better than ever.”

To celebrate the completion of these two projects, the museum will host its annual Founder’s Day celebration from noon-5 p.m. on Saturday, Aug. 13. The free gathering, in honor of the museum’s late founder Esther Gordy Edwards, will feature live entertainment on the new plaza, vendors, and performances by Hitsville NEXT program participants.

The museum will welcome visitors back for abbreviated walking tours beginning Sunday, Aug. 14. Portions of Hitsville U.S.A. including Studio A and the museum’s campus will be open while other areas will remain closed due to water damage. Full tours are expected to resume on Saturday, Oct. 1.

Hitsville NEXT and the Rocket Plaza were designed by Detroit-based architectural firm Hamilton Anderson & Associates. Rocket Companies and the Gilbert Family Foundation contributed $5 million for the completion of Rocket Plaza. Both projects mark the second phase in a planned $50 million expansion for the museum.

“Rocket Companies and the Gilbert Family Foundation are dedicated to making philanthropic investments that build a strong social and economic foundation for all Detroiters,” said Matt Rizik, chief tax officer at Rock Holdings. “The history of Motown is inextricably linked with the history and legacy of Detroit, and we are proud to support the expansion of the Motown Museum. This expansion will both celebrate our history and will be a strong foundation for the next generation of musicians, entrepreneurs, and proud Detroiters.”

For more information or to book museum tours, see motownmuseum.org.