This ‘Predator’ prequel is a solid entry into the sci-fi franchise, though that’s perhaps the problem 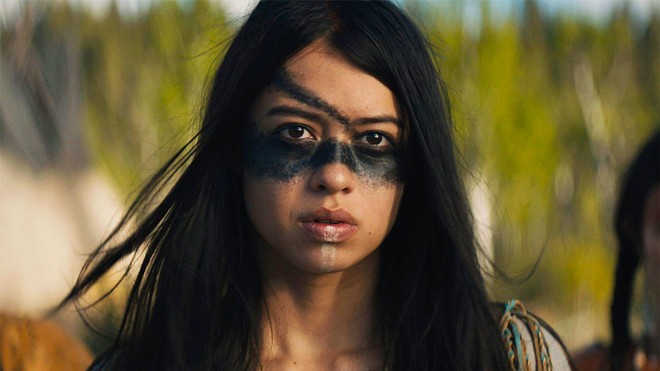 Even as the original Predator, released in 1987, still feels impeccable for its sly script and cast, and for its abundance of visual and choreographic pleasures, the bar of “decency” its successors should have to meet doesn’t seem staggeringly high. Prey, a new prequel (not that chronology matters) directed by Dan Trachtenberg and now available to stream on Hulu clears it and then some, competently pitting a band of 18th-century Comanche trackers against an alien sport hunter. At the same time, it works in dialogue with the first through this transplantation, spotlighting a tribe with a case to hold and defend the land they fight on rather than the choppered-in band of interventionist outsiders from the franchise’s first entry. Despite this allegory of challenged colonial hierarchy thickening its solid-enough action proceedings, Prey’s style still often feels hollow and received, with a bevy of drone work, CG creatures, and unimaginative framing and blocking holding it back.

With Amber Midthunder starring as Naru, an aspiring female hunter whose brother Taabe (Dakota Beavers) roams the Great Plains with the kind of freedom she covets, Prey makes hierarchies — of gender, of food chains, and of colonial and alien intrusion — its central subject. (Speaking of, Hulu offers a Comanche-language dub: strongly recommended over the English, which often comes off as stiff.) As an injured, largely unseen chief quietly ails and a generation of adults seems preoccupied with their own duties, the tribe’s young people — mostly boisterous men — compete for prestige as they hunt game amid the forests and plains they call home. But Naru, dismissed for her sex often by her brother’s friends, finds herself left largely to pursue game solo, appearing self-taught to a greater degree than her male peers. Though acknowledged as an able tracker, she’s implied to have had to make her own education, counting her dog Sarii as a key hunting partner.

Enter, then, the Predator: a dreadlock alien whose advanced weaponry, infrared gaze, obscene height, and profound strength place it at the top of the heap among those who’d call hunting their vocation. As in nature, the creature makes those lesser creatures it can best its prey, its pursuit of humans here bestowing the film with a franchise-familiar kind of gladiatorial wrinkle. Arriving on Comanche land, the Predator sets itself upon pursuing a menagerie of creatures for sport before turning its attention to the humans who would hunt them.

The parallels to colonialism here are obvious, barely requiring explanation; a previously unknown entity arrives in the Americas by ship, wielding novel weaponry and structural advantages in pursuit of knowledge and resources long stewarded by native inhabitants. When challenged in that same pursuit by this indigenous presence and (at least a perception of) competing aims, the invader embraces violence against them, a new quarry it regards as lesser than itself. This makes the question of Prey, then, whether — at least in this instance — such a “food chain” or a string of apparent hierarchies can be disrupted, and how this might be achieved.

To illustrate (or one might say underline) this, Trachtenberg spotlights sequences of various wild game being felled, many rendered in CG. Eagles, snakes, wolves, cougars, deer, and more meet the threat of or fall to both Comanches’ and Predators’ weapons in confrontations with ping-ponging levels of success in dramatic impact. While I’m not here to ask for any of these animals to be killed or physically wrestled with for drama’s sake, it’s long past time filmmakers realize that our endless exposure to unimaginative CG renderings — and our consciousness of them as such — has some impact on their emotional effect. Cutting from real actors to a pair of CG birds and back creates an experience (unless it’s well-finessed, as happens occasionally here) about as continuous as switching between a movie and a video game, or even a movie and one’s phone. The experience is more interruptive than engaging, a distraction akin to being gnawed at by a mouth lined with toothless gums. Whether through puppets, prosthetics, or better-integrated renderings, some alternative needs to be pursued for movies featuring this stuff to succeed.

Thankfully, the scenes with the Predator itself track better. With the creature played here by Dane DiLiegro in elaborate prosthetics, Prey finds echoes of Kevin Peter Hall’s embodiment of the original Predator through fidelity to his movement style. With gestures pivoting on a dramatic turn from the considered and methodical to the decisive and severe, there’s a satisfaction to watching Prey’s predator mete out asymmetric violence, particularly when it encounters parties who (at least in the film’s narrative schema) seem to merit it. Both coolly professional and intensely embodied, there’s blood pumping beneath the action work here in a way that’s rarer with the film’s purely CG-driven scenes; the Predator is all the better to watch for seeming genuinely athletic.

All this makes Naru a credible underdog, if an underestimated one. In going against the Predator (as well as competing against her brother and his peers), her air is skillful without bearing the satisfied air of a credentialed expert. As a result of this and her gendered position, her emotional tenor skews a bit self-conscious: striving, deliberate, defiant. The script doesn’t give Midthunder a tremendous amount more than this to play on, but she fares well enough with what she has. Embodying a hunter who’s still learning her trade, getting by through a mixture of discipline, skill, and invention, her performance is key in outlining what allows her even a hope of success.

The film’s action evokes this perspective, using grass-high, low-angled camerawork to capture faceoffs amid Alberta’s rivers, cliffs, and fens. Despite this, it can also often feel schematic, with expected reversals of fortune in many faceoffs themselves punctuated by predictable dialogue, interspersed with wheeling drone photography. Shot by veteran cinematographer Jeff Cutter with a bright sense of visual clarity and no shortage of tricks, Prey basks in a visual style that’s attractive but rarely expressive: a capable sort of commercial work. That’s in some sense Prey wrapped in a nutshell: a product less of a voice or even an experience than of the system we inhabit.