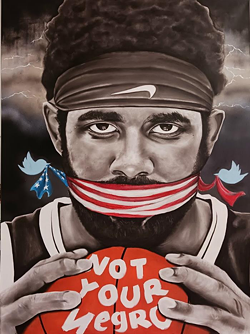 Courtesy of Irwin House Gallery
"Not Your Negro" by Ivan Quiñones II.

Detroit’s Irwin House Gallery is continuing its dedication to highlighting Black talent with a strong lineup of events for Black History Month.

The gallery, located at 2351 W. Grand Blvd., will host the first solo exhibit for emerging artist Ivan Quiñones II, called The Price of Speech. The exhibit is anchored by the painter’s critical “Not Your Negro” piece, which depicts a pair of Twitter birds gagging Brooklyn Nets basketball player Kyrie Irving with an American flag.

Irving was temporarily suspended from the NBA and lost an endorsement with Nike last November after tweeting his support of the controversial film Hebrews to Negroes: Wake up Black America, which has been criticized for promoting antisemitism.

Quiñones, who was born and raised in Pontiac, made “Not Your Negro” in response to the controversy to address the silencing of Black voices and the true cost of free speech. In the exhibit, Quiñones also pays homage to Black athletes who were chastised for speaking out on civil and social issues like Colin Kaepernick, who famously kneeled during the U.S. national anthem at NFL games to protest police brutality, and John Carlos and Tommie Smith, who similarly raised their fists at the 1968 Olympics.

A tribute mural to Detroit artist and activist John Sims by Quadre Curry will also be on display at Irwin House through the end of the month. Several works by Sims, who passed away in December of 2022, will be displayed on the second floor of the gallery. As a tribute to Sims’s annual birthday and Valentine’s Day event, the SquareRoot of Love, Irwin House will host a candlelight open mic poetry night called Love Language on Monday, Feb. 13 from 6 p.m. to 9 p.m. 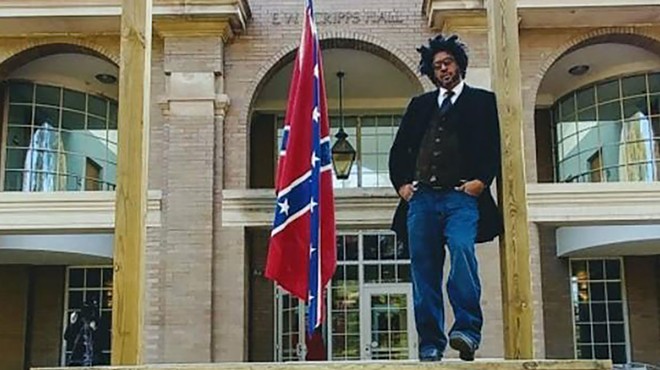 R.I.P. Detroit artist and activist John Sims: The brilliant native son who led an immense and inspired life will be celebrated in Detroit