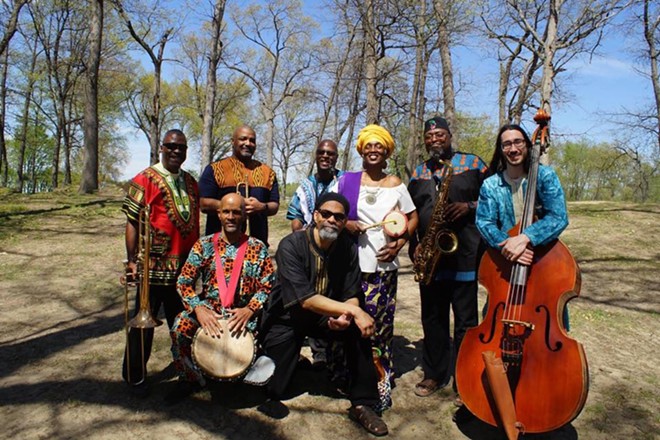 In The Tradition/ Facebook
The 11-piece African-centric jazz band will perform on Monday, July 4 at the Shrine of the Black Madonna Church.

If you aren’t in a celebratory mood this Fourth of July, we don’t blame you, especially if you’re a Black American.

Instead of a barbecue with fireworks, a group of Detroiters is hosting an alternative event that centers around the African Diaspora and the revolutionary spirit of Frederick Douglass, called "What to the Negro is the Fourth of July?"

The event features a performance by In The Tradition, an 11-piece African-centric jazz band, on Monday, July 4 at the Shrine of the Black Madonna Church. In The Tradition will perform songs interlaced with readings of excerpts from Frederick Douglass’ 1852 speech “The Meaning of July Fourth for the Negro.”

In the speech, given in New York to commemorate the signing of the Declaration of Independence, Douglass calls out the hypocrisy in celebrating the “land of the free” when Africans were still enslaved at the time.

He famously declared, “What, to the American slave, is your 4th of July? … To him, your celebration is a sham; your boasted liberty, an unholy license; your national greatness, swelling vanity; your sound of rejoicing are empty and heartless; your denunciation of tyrants brass fronted impudence; your shout of liberty and equality, hollow mockery…”

“This departure from traditional Independence Day celebrations affords Black people of the African diaspora the opportunity to reflect on freedoms gained and freedoms lost,” In The Tradition said in a statement via email.

The event goes from 2-4 p.m. and also serves as a fundraiser for the Detroit Black Farmer Land Fund, which supports Black farmers in their efforts to secure land and grow their own food. Tickets are $10 and can be purchased online in advance.

The Shrine of the Black Madonna Church is located at 7625 Linwood Ave. , Detroit.