The film screens at Cinema Detroit this weekend 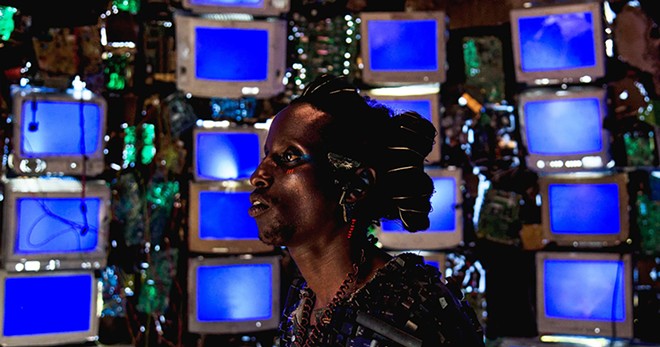 The digital and material world’s whole production pipeline is laid bare in Neptune Frost, a new science fiction musical playing Cinema Detroit this weekend (and landing on VOD soon after). In following a group of Rwandan mineral miners who rise to form a revolutionary hacker collective, directors Saul Williams and Anisia Uzeyman find that worlds of possibility, if often hard-won, await for those willing and able to reshape their own reality. Exploratory as the film is, though — magnetically drawn to all manner of transfixing aesthetic and political possibilities — it finds an easy sense of focus by honing in on questions of power. At the film’s open, both how tools for control are produced and for whom they’re made provide the longstanding, structuring questions of its hard-laboring characters’ lives in a way that ought to feel familiar to any reader. But when the film’s cast elects to generate resources for themselves rather than their post-colonial overlords, new horizons swiftly open.

If that sounds marxist in tenor, it is — but labor unrest is but one of Frost’s many ingredients. Just as key to this wandering and florid project are the aesthetic tenets of afrofuturism: the visionary aesthetic movement that fueled Detroit techno’s rise locally, and which dreams of Black actors’ transcending oppressive systems through the and embrace of novel, often futuristic technology. Here, as is common, that work of reclamation marries easily with the workers’ efforts to seize on the potentialities of hacking, destabilizing the technologies which their body-breaking mining work has so long served to produce. By re-taking the technologies of surveillance capitalism, and re-deploying them for their own ends, the film’s collective upends damaging, familiar financial structures but doesn’t stop there. As they wrest control of their own futures, their project of code-breaking continues, with many other longstanding bastions of order and social structure fall away. Here, gender is key among them.

In this as with much else, Frost isn’t just about the collective but the individuals and especially leaders within it. Pivoting around a central romance between Neptune (played by actors Cheryl Isheja and Elvis Ngabo in a gender-destabilizing joint effort, driven by a rupture partway through the film) and Matalusa (Bertrand Ninteretse), the pair work to push one another to newfound forms of discovery, power, and enlightenment. If that sounds hazy and conceptual, like something you’d read in a caption on a gallery wall, then that’s not off-base; much of the film’s dialogue is delivered in a quasi-metaphoric register of which the same could be said. But Frost, even as it feels at times narratively abstracted and intellectually roving (and far-reaching), is reliably grounded by its material textures and the way in which it’s produced. As costumed by Cedric Mizero, the film’s bold and elegant characters wear their lights and goggles and glowing ornaments as badges nodding to their own resourcefulness, demonstrating on a bodily, human and expressive level the potentials which drive the film. Invested throughout in questions of what can be engineered through atmosphere, affect, and texture amid a dearth of easy resources (a key feature of techno as well), Frost benefits from artists who holistically understand their own project and its contours, grasping the political and aesthetic implications not only of narrative but the manner in which it’s shaped. More thrillingly, they find in working within limitations a path to all sorts of aesthetic discoveries; rarely is this a work that succumbs to the expected in its use of music, editing, framing, or light.

Despite all the thematic weight the film bears, it’s enlivened throughout by this playful approach, seeking to make anarchy and political rebellion tantalizing: not merely some dour, dutifully undertaken political project. This is likely plainest in the film’s approach to music, which glides in and out of styles. Any given line might be delivered unsung, in rousing chants, or in abrupt, manifesting, more highly choreographed musical numbers, and in musical and lyrical styles hailing from an ample range of genres and traditions. At the same time, the film’s futuristic world bears the hallmarks of new, old, and imagined technologies, and its many features are lit with a sense of real vitality; even when the camera dips whole frames into deep shadow or silhouette, accents from the film’s rich palette shine through. So taken are the film’s makers with the aesthetic potentials they find that they make little space for piety onscreen either — always a trait best kept absent even for works that seem politically “right.”

The effect of all this is the one that should rightly be found in artistic style: elevated by a sense of constant questing, Frost’s filmmakers seem alive to mood, style, and possibility in ways that have long been but lately feel especially too rare. While there’s plenty to follow here in terms of narrative thread, it would be just as easy — and at least as fun — to simply bask in Frost’s fine atmosphere and style, experiencing it more as a lyric than as a yarn. Whether taken for its aesthetic virtues or grappled with on any other terms, Frost manages to feel intellectually agile, holistically considered, and emotionally full. Fully conscious of the potentials available in their own craft, Williams and Uzeyman’s labor seems clearly to be its own reward.