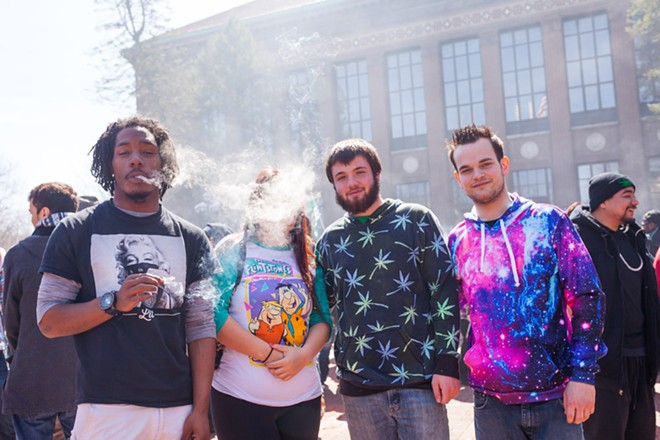 Jordan Buzzy
Like something lifted from a fairytale, at the stroke of midnight, Michigan became the tenth state in the country (and the first in the Midwest) to end its prohibition against marijuana.

There’s a catch though. Well, there are a few catches.

“People will get their cannabis on December 6 from the same place they got it on December 5th — the illicit market,” says board member of MI Legalize, Michigan’s grassroots legalization movement, Rick Thompson. “Until the legal and regulated adult use market gets up and running there will be very little change in both the number of people using and the way cannabis is acquired in Michigan.”

Despite legalization coming into effect today, there is not a single place to legally purchase recreational marijuana in the state because policymakers have yet to authorize any retail businesses.

Pot is legal in Michigan this week, but there's nowhere to buy it

Michigan’s Department of Licensing and Regulatory Affairs, which screens business applicants for marijuana licenses, is not likely to begin accepting applications until Dec. 6, 2019. Then it could take months for applications to be approved, says Detroit-based criminal defense lawyer Matthew Abel.

“They basically stuck their heads in the sand and said they weren’t going to do anything,” says Abel, who serves as executive director of the Michigan chapter of NORML, the National Organization for the Reform of Marijuana Laws.

“LARA’s made a big mess of this,” he says. “What lawmakers should have done is focus on licensing growers and transporters, and enabling medical marijuana facilities to sell retail.”

So for now, there’s nowhere to buy pot. Michiganders are, however, free to grow up to 12 plants in their homes for personal use or to gift away, but not to sell.

“If you’ve got a few joints layin’ around, I’m happy to take them off your hands,” says Abel, who says he is celebrating tonight with an end-of-prohibition party. “This is a monumental day, but there’s still a long road ahead of us.”

Beyond waiting for recreational provisioning centers to open up, the law carries a few conditions. You must be 21 or older to legally consume or possess marijuana and you can only light up in the sanctity of a private residence. Possession is limited to 2.5 ounces in public and 10 ounces privately — which, scientifically, is a shit-load of weed.

It's also important to note that it remains illegal to drive under the influence. Last fall, police in five Michigan counties piloted roadside drug tests to detect for marijuana, opioids, cocaine, and other substances above a certain threshold. The program wrapped up last month; once the data has been analyzed, it will be determined whether to implement roadside drug testing on a larger scale.

Stay on top of Detroit news and views. Sign up for our weekly issue newsletter delivered each Wednesday.
Scroll to read more One Hitters articles
Join the Metro Times Press Club