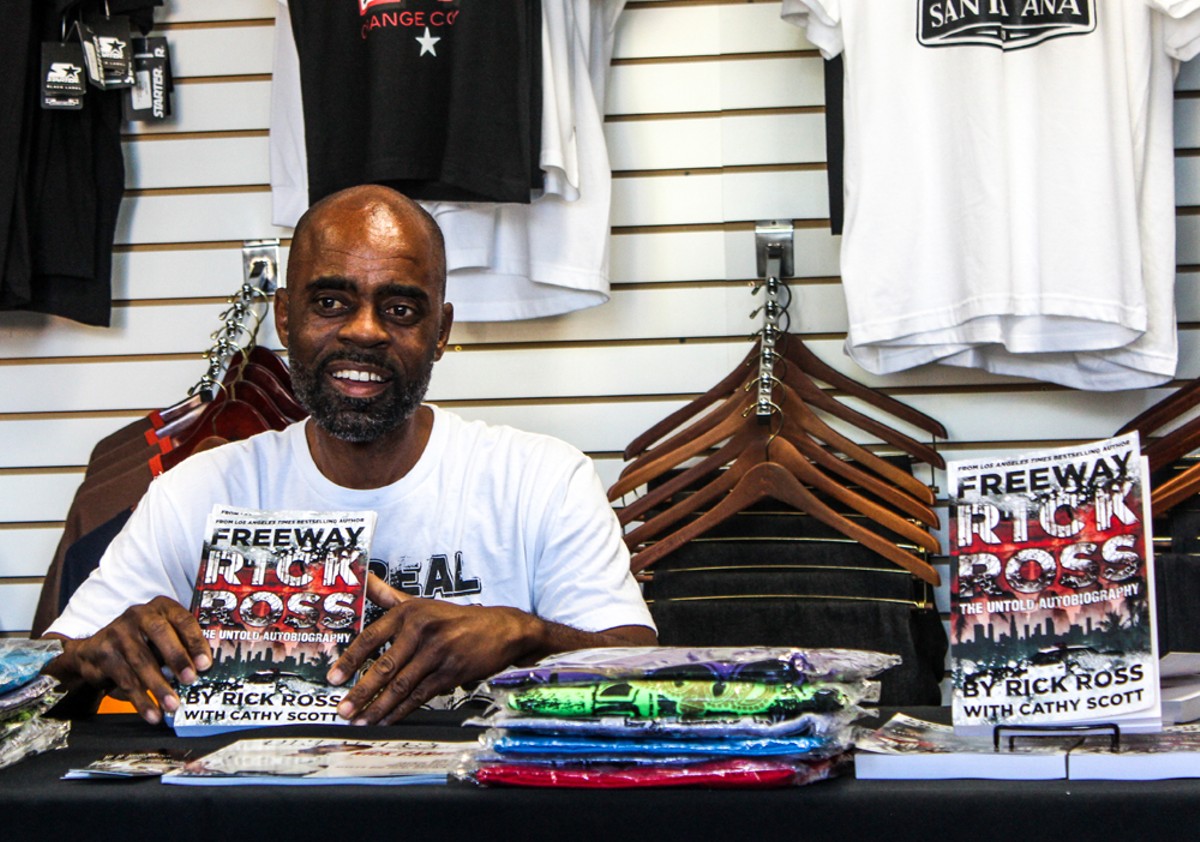 "Freeway" Rick Ross was in town recently, and he'll be back soon. That's because he's working with the group National Diversity Inclusion & Cannabis Alliance to help Black and brown people get into the cannabis business in Los Angeles, Chicago, and Detroit.

In case you don't know who Ross is, he's the guy who some blame for popularizing crack cocaine back in the 1980s. Starting in 1989, Ross served prison time in Ohio, Texas, and California. The California imprisonment was a life sentence on federal charges, but the sentence was later reduced and Ross was freed in 2009. Over the past five years, he fought for and recently was granted a license to sell adult-use marijuana in Los Angeles.

It's been a long road from illegal cocaine dealer in 1989 to legal marijuana retailer in 2019.

According to the way he tells it in his eponymous autobiography, Ross bought his first cocaine in 1979 for $50. The next day he sold it for $100 and was hooked on the money. It was 1979 and "crack cocaine" wasn't even in the lexicon yet, but the rocks of white powder fueled a billion-dollar business empire for Ross. It probably helped that when he first snorted cocaine he didn't get high. That helped him keep a businesslike attitude as he started moving product.

Ross claims he was a millionaire within three years. "I'd learned from all the players, from the car thieves to the pimps, to never use," he says. "If you get strung out, you smoke up, snort, or shoot all your profits and then you become just another junkie."

One curious thing that led Ross down this path was the fact that he was not literate. He played tennis in high school and was in line for a tennis scholarship, but when it was discovered he couldn't read or write, that opportunity disappeared. He gained his literacy while imprisoned and used that tool to write a book about his life.

Another thing Ross credits for his early rise was that PCP was the main drug people used in and around L.A. When he showed up on the scene with cocaine, none of the big dealers took him seriously, so he was allowed to operate undisturbed when first setting things up. At least according to Ross, he was not a ruthless, violent crime lord killing off his opponents as he rose to the top. Good business principles and negotiation seemed to be the best way to do things.

Ross bought and larger amounts, which led him closer and closer to the main and cheapest source of supplies possible. He met and began buying large amounts of cocaine from Nicaraguan exile Danilo Blandon. Ross was moving about 1,000 pounds of cocaine a week. He had thousands of employees and invested his profits in straight enterprises — houses, a motel, a junkyard, race cars, music production, and other small businesses. He invested in Anita Baker's first album. Ross had a plan to get out of the drug business with money and a legitimate profile.

According to a 2013 article in Esquire, Ross imported and sold several metric tons of cocaine in the 1980s, grossing near a billion dollars and making a profit of $300 million. He was shipping cocaine to New York, Pennsylvania, Ohio, and beyond. During that time, Ross bought cocaine alleged to have been sold by Nicaraguan Contras and protected by the CIA. In 1996, investigative journalist Gary Webb wrote a "Dark Alliance" series of articles for the San Jose Mercury News detailing an allegation that the Nicaraguan operation helped popularize crack in the United States through Ross.

Ross was not aware of any of the Contra-CIA stuff. But law enforcement caught up to him, and he spent 1989-1994 in Ohio and Texas prisons. Then he returned to L.A., but not the cocaine business. He had enough money and businesses to do well without selling drugs. However, after a couple of years Blandon contacted Ross and offered him $300,000 to find him a buyer for his cocaine. Ross made the introduction to a buyer, but it was a sting operation and he was arrested.

‘Most of the people who were there were white guys and they had wads of money like I used to have in the old days. They bought a lot of my books, and I said this is where I need to be.’

Ross was given a life sentence in federal prison in 1996. The sentence was later reduced, and he was released in 2009. Since then, Ross has stayed away from the cocaine business and, after a few years on probation, he's now a marijuana activist.

"I didn't pay much attention to the cannabis industry because I was on parole," Ross says. About six years later, a friend invited him to a cannabis event.

"When I saw what was going on, I said to myself, 'I want in — let me in this game,'" he says. "When I went to that event, most of the people who were there were white guys and they had wads of money like I used to have in the old days. They bought a lot of my books, and I said this is where I need to be. So I started trying to get into the industry about five or six years ago."

Now Rick Ross is back, selling marijuana, books, and working with NDICA in California, Illinois, and Michigan in the effort to help Black and brown people profit from the marijuana industry. There's a page at the end of his book with a list of business principles to live by.

"I always saw it as a business, but I just had the wrong product," says Ross.

The story that Ross tells is attached to personal tragedies across the country. That will never go away. But there are people here who have lived through some of that and suffered from the war on drugs, and we choose not to throw them away. In the same way that marijuana has healing qualities, healing those who were harmed by the war on drugs has taken precedence for Ross.

Today he works to help those with records expunge them. He advocates for more encompassing laws for more expungements. He encourages those who want to get into the cannabis business, citing the experiences of his long slough to get in. And, he says, don't believe you have to already be rich to make it.

So does Freeway Rick Ross owe a debt to society? He certainly put in the years of incarceration that the justice system says that he owed. That's all I can go by until he shows us something else. If he owes society anything more, well, he's working on it as he helps to bring some people not very different from him into the cannabis business.