The Trumpified courts can’t be trusted 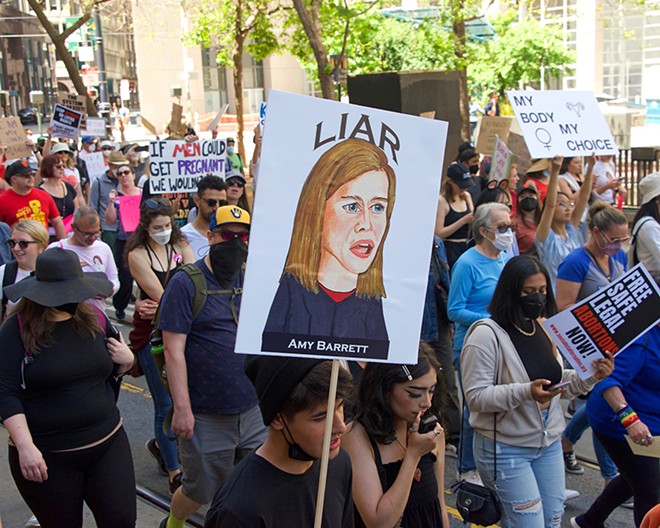 Shutterstock
Protesters marching in the streets in support of abortion rights.

On Sept. 12, 2021, Justice Amy Coney Barrett assured an audience at the University of Louisville’s McConnell Center — named for the Senate majority leader who both introduced her that night and secured her place on the Supreme Court a year earlier — that “this court is not comprised of a bunch of partisan hacks.”

The court had just green-lit Texas’s Roe v. Wade workaround and blocked President Joe Biden from reversing a Trump-era immigration policy. In the following year, it overturned the right to abortion and invented constitutional theories to gut environmental regulations, obliviate gun policies, and allow states to execute innocent men because they’d been given shitty lawyers.

So last week, it was Chief Justice John Roberts’ turn to assure the country that his court wasn’t composed of partisan hacks.

“The court has always decided controversial cases and decisions have always been subject to intense criticism, and that is entirely appropriate,” Roberts said in Colorado Springs. “But I don’t understand the connection between the opinions people disagree with and the legitimacy of the Supreme Court.”

It’s true that the court has decided many controversial cases over the last 220 years. But there’s a reason fewer Americans than ever — especially Democrats and independents — profess confidence in the justices now.

It’s not just that a few decisions didn’t go their way. It’s that most of these justices were appointed by presidents who lost the popular vote and confirmed by senators who represent a minority of the population. And they did it while lecturing about “judicial restraint.”

More than that, the crisis in confidence stems from the growing recognition that five or six members of the Supreme Court are the far right’s bulwark against democracy itself — their means of imposing an agenda without public support.

When Justice Brett Kavanaugh tried to minimize the enormity of overturning Roe, he argued that he and his colleagues hadn’t outlawed abortion but rather returned the issue to the states, where democracy could function as the founders intended.

That claim might hold up better if the court hadn’t spent the last decade crippling democratic safeguards: first with Citizens United, which opened the floodgates to untold billions of dollars in election-buying money; then with Shelby County, which junked a key part of the Voting Rights Act; then with Rucho, which signed off on extreme partisan gerrymandering.

And the more exposure we have to any of Donald Trump’s judges, the more reason we have to be skeptical of all of them.

Look no further than Aileen Cannon, the undistinguished Federalist Society member the Republican Senate confirmed to the federal bench in South Florida as Donald Trump tried to overturn the 2020 election, and who Trump ran to in his desperate bid to slow the FBI’s investigation into stolen classified materials.

The Presidential Records Act is explicit that the documents Trump hoarded belong to the federal government, and any lawsuits involving the PRA must be filed in Washington, D.C. Cannon ignored that. Both the PRA and Supreme Court precedent are clear that Trump can’t exert executive privilege to keep records from the FBI (or any other part of the executive branch). Cannon decided he might, should the special master she planned to appoint decide that the records the law says belong to the government don’t actually belong to the government.

The crisis in confidence stems from the growing recognition that five or six members of the Supreme Court are the far right’s bulwark against democracy itself — their means of imposing an agenda without public support.

Most obnoxiously, Cannon ordered the FBI to stop using those documents — including the more than 100 classified documents Trump had taken from the White House — as part of its investigation, a remarkable mandate from a judge in a civil proceeding considering that the search that obtained these records was approved and overseen by a federal magistrate.

Cannon, trying to sound reasonable, said the intelligence community’s threat assessment could continue while the investigation was on hold, even as she held out the possibility of ordering the government to return to Trump the classified records he’d stolen. On Friday, the Justice Department gently reminded her that the FBI is part of the intelligence community and is deeply intertwined in the threat assessment.

Cannon has yet to rule on the government’s motion to let the FBI investigate the recovered classified documents.

Trump tried to get Cannon assigned to the bonkers-ass lawsuit he filed accusing Hillary Clinton of spreading misinformation about his connections to Russia in 2016.

“I note that Plaintiff filed this lawsuit in the Fort Pierce division of this District, where only one federal judge sits: Judge Aileen Cannon, who Plaintiff appointed in 2020,” Judge Donald Middlebrooks wrote in April. Middlebrooks dismissed what he called Trump’s “200-page political manifesto.”

If the government appeals Cannon’s rulings, the case will move to the 11th Circuit, where Trump appointed six of the 11 active judges.

Of course, revanchist judges pre-date Trump; the conservative movement to capture the judiciary has been in progress for decades.

Last week, Reed O’Connor, the George W. Bush appointee who previously tried to strike down the Affordable Care Act on a batshit theory that Congress ending the individual mandate killed the whole thing, ruled that a Texas company doesn’t have to cover HIV prophylaxis drugs because its owner says that medication “facilitates and encourages homosexual behavior,” and saving the lives of homosexuals makes God mad.

The ruling might not stand. But Roberts laid the groundwork in the 2014 Hobby Lobby ruling, in which he declared that corporations can have religious beliefs that exempt them from federal law. And the 5th Circuit Court of Appeals, which will hear the inevitable appeal, is one of the most conservative in the country.

From there, it will go to the Supreme Court, where five justices have made their ideological agenda clear. That, John Roberts, is why people don’t trust the Trumpified courts.

We’ve seen them for the political hacks they are.