The Death of Vincent Chin 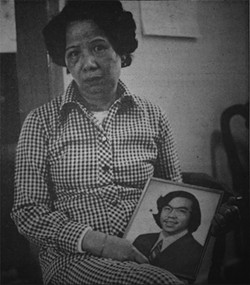 The killing of Vincent Chin last June might have been just another senseless killing, the kind of thing that happens when angry words are exchanged at a “businessmen’s club” like the Fancy Pants Club in Highland Park.

But when Judge Charles Kaufman accepted a manslaughter plea from Ronald Ebens and Michael Nitz, the two killers, and then freed them on probation with a fine of $3,780 each, it was no longer just another senseless killing.

Kaufman’s lenient sentence sent waves of shock and anger throughout the metro area, and has drawn national attention. Detroit’s usually low-profile Chinese community has been aroused into action, and the furor has the courts, prosecutors, probation department and police pointing their fingers at each other.

American Citizens for Justice, a newly formed, predominantly Chinese-American group which is leading the efforts to change the sentence, has charged that the courts relied upon “misinformation and material errors” which “tainted” the court’s sentence. “We are asking Prosecutor Cahalan to file a written motion to join our request to vacate this sentence,” said Kin Yee, president of the new group.

Falling Through the Cracks

The account of what happened that night on June 19 is largely documented through eyewitness reports and testimony taken at a preliminary hearing. But little or none of it was available to Judge Kaufman at the time of the sentencing. Kaufman himself has stated on several occasions that he saw only one report of the incident, made by the Wayne County Probation Office.

Kaufman has steadily maintained that “Chin threw the first punch” and has indicated that this factor influenced his sentencing. Yet neither the Highland Park police nor the prosecutor’s office obtained statements from other witnesses at the club regarding the nature of the bar room scuffle, and the judge relied on the defendant’s attorneys’ accounts of what happened at the club.

The probation office recommended incarceration. Matt Beer, in his Detroit News (4-21-83) column, revealed that a confidential psychiatric report described Ebens as an “extremely hostile and explosive individual … with a potential for uncontrollable hostility and explosive acting out.” The report recommended treatment. Kaufman followed neither recommendation.

The Prosecutor’s office has refused to comment on the American Citizens for Justice formal request that they appeal the court’s sentence. But Prosecutor John Thompson, in charge of the Appellate Division, pointed to the court and to the Highland Park police. “Judges are elected: some are good but some aren’t,” he stated, adding, “the Highland Park police department is not one of Wayne County’s better departments.”

Thompson failed to mention that Prosecutor William Cahalan is also an elected official. Nor has the prosecutor’s office commented on why they accepted a manslaughter plea from Ebens and Nitz, particularly when there were indications that the charge should have been first degree murder.

Meanwhile, Highland Park Detective Roberts told a reporter that first degree murder (premeditated) was never considered. Yet his own men, Cotton and Gardenhire, in witnessing the bludgeoning, said on TV that they were sure that Ebens intended to kill Chin, and if they had not stopped him, he would have struck Chin “another 20 blows.” Cotton, the arresting officer, was never asked to give his testimony to the court.

Judge Thomas Bayles, who presided over the preliminary hearing and was the only judge to hear eyewitness testimony, stated on the record that Ebens and Nitz should have been charged with first degree murder.

Because the prosecutor’s office has not responded to their request for an appeal, the citizen’s group has filed an application to represent the “people’s interests” in the case. A public hearing on the group’s application has been scheduled for April 29 before Judge Kaufman.

A Question of Racism

When Judge Kaufman sentenced Ebens and Nitz to probation and a fine, he reportedly said that they “weren’t the kind of people you send to jail.”

The racial implications of Kaufman’s sentence are clear. Kaufman’s comments suggest that minorities, the unemployed and non-students are the kind of people who should go to jail.

For Asian Americans, the subject of injustice is a sensitive one. Besides the massacres of Chinese workers during the frontier days, Asians have also been the targets of Ku Klux Klan lynchings, Chinese have been subject to severe discrimination in U.S. immigration laws, and, once in the U.S., have faced bias in jobs and housing.

More recently, Japanese Americans were singled out for placement in concentration camps. During World War II and the Korean and Vietnam wars, racist characterizations of Asians were perpetuated, and have been revived once more to whip up hysteria against foreign imports from Japan.

The issue of racism is also a touchy issue for Judge Kaufman. He has painstakingly explained to reporters and the citizens’ group that he has been in support of the civil rights movement since the 1940s.

Several other organizations, such as the National Association of Black Organizations, have taken a stand against Kaufman’s sentence. The Detroit chapter of the NAACP, in a tersely worded statement, resolved, “We infer the elements of racism in Judge Kaufman’s reported statements. Black people know that when punishment is meted out to fit the perpetrator, rather than the crime itself, we as victims become the ultimate losers.”

But what has aroused the greatest outcry is the conclusion that a human life can be brutally taken with almost no consequences — except to pay $125 per month. Kaufman’s sentence has stirred feelings about justice that cut across racial and ethnic boundaries.

In a letter to the Free Press, a reader from Traverse City wrote, “Every so often our imperfect legal system comes up with some decision that is so outrageous, so astonishing in its ineptness, that it seems the very soul of fair play has been violated. (This) is such a decision.”

Ironically, Kaufman is reputed to be a “fair judge.” Howard Simon, of the American Civil Liberties Union, stated that “Judge Kaufman is considered to be one of the better judges.”

Judge Kaufman’s sentence may be the logical extension ad absurdum of a “liberal” approach to criminal justice. Kaufman apparently looked only at the social backgrounds of the defendants without consideration to the severity of the crime or the rights of the victim. Though social factors are important, Kaufman isolates them from the context of the crime. In doing so, Kaufman not only assaults the very principle of human rights, but his decision also fuels such law-and-order causes as mandatory minimum sentences.

Kaufman, in misgauging the public outcry over his sentence, told a reporter that “if people feel no one should get probation for manslaughter, then they should go to the legislature.”

But the Chinese-American community is clear on its aims. “What we want is justice, and we will take whatever action is necessary to achieve that goal,” says Kin Yee.

Helen Zia is a frequent contributor to the Detroit Metro Times. She is a member of the American Citizens for Justice: the opinions expressed are her own.