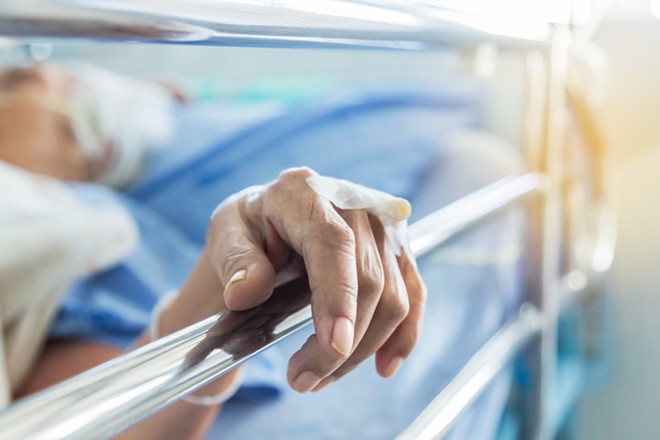 When COVID-19 first paralyzed our nation last winter, many Republican leaders blasted stay-home orders, arguing they would kill businesses and inconvenience folks who had to pause going to the mall or the movies. The soaring death rate oddly seemed to be a far lesser concern.

Then they railed against masks, spreading weird conspiracies that a little fabric on your face was a bigger impediment to breathing than a disease that can make you feel like your lungs are crammed with broken glass.

When vaccines rolled out earlier than anyone could have reasonably hoped last December, right-wing figures began pushing the insane lie that the miracle shots were worse than the virus.

Fortunately, the sane majority hasn’t listened to their callousness and misinformation, as 65% of adults are fully vaccinated, with 75% having gotten at least one dose. (Michigan lags a bit behind with a 62% immunization rate).

But right now, hospitals across the country are still filling up with COVID patients, who are almost all unvaccinated, making this fourth surge so tragically unnecessary. Notably, ICUs are not jammed with people suffering from side effects of the vaccine, yet another data point in how wrong the right has been about how to tackle COVID-19.

There’s a grifter element to all this for sure. Many GOP leaders are vaccinated — members of Congress were some of the first to be offered the shot and all 50 governors have gotten it. Even Fox News has a requirement, which means your favorite talking heads who compel you to wage war against Big Science have COVID vaccine goodness coarsing through their veins (not horse paste).

Months before COVID vaccines were approved, Shirkey said, “Nobody should be misled here or of the opinion that you can keep it from spreading — it’s going to spread, so we just do the best we can. I’m also a big believer that there’s an element of herd immunity that needs to take place.”

But there are some true believers, like Michigan Senate Majority Leader Mike Shirkey (R-Clarklake) who unsurprisingly contracted COVID in December after publicly shunning masks and mandates. He now claims he has “natural immunity” (even falsely declaring it will last “forever”) and won’t get the shot.

The state’s top Republican doesn’t back the state’s effort to increase vaccinations, but he does want the state to look into ivermectin to treat COVID, something pushed by right-wing media figures. The state, Food and Drug Administration and the Centers for Disease Control and Prevention have all said the drug intended to treat parasitic illnesses, like head lice and scabies in humans and worms in animals, is not a safe coronavirus treatment. (It might even make men impotent).

But it was comments Shirkey made last October that are the most revealing of the COVID approach he and too many Republicans have taken.

Months before COVID vaccines were approved, Shirkey said, “Nobody should be misled here or of the opinion that you can keep it from spreading — it’s going to spread, so we just do the best we can. I’m also a big believer that there’s an element of herd immunity that needs to take place.”

We talk a lot about hitting herd immunity these days in trying to get to a 70% vaccination rate, which medical experts say is the bare minimum to protect those who can’t be immunized, like children under 12 and severely immunocompromised people.

Let’s be clear: That’s not the herd immunity Shirkey was talking about, similar to comments made by a top science adviser to former President Donald Trump. This is a social Darwinist approach to herd immunity achieved by mass sickness and death. As a group of national medical experts said in their response to Shirkey, that would mean an 80% infection rate, with more than 6.5 million Michiganders getting the virus.

And there you have it.

That’s why there was never a real cohesive GOP strategy to fight COVID. There were a few GOP governors, like Ohio’s Mike DeWine, who enacted comprehensive safety measures, especially early on. But the more popular track for ambitious Republicans like Texas Gov. Greg Abbott and Florida Gov. Ron DeSantis was to adopt the “Shirkey Doctrine” and convince enough Americans that the virus was inevitable and everyone should get used to mass illness and death (and they could always blame Critical Race Theory-pushing Democrats, for good measure).

It’s really no different than most tenets of conservative philosophy. Poverty, inequality, racism, environmental catastrophes and more are all just a part of life, they tell us, and thus can’t ever really be eradicated. So we’re wasting our time and money to try. (Look, if something can’t be solved with a tax cut, is it really even a problem?)

Often it comes with a religious right twist: Suffering is an inevitable part of life, as a result of original sin, and the faithful are rewarded in heaven. That’s why GOP Mississippi Gov. Tate Reeves appeared be so chill last month as his state surged to having the highest per-capita rate of new coronavirus cases and deaths in the nation.

It's really no different than most tenets of conservative philosophy. Poverty, inequality, racism, environmental catastrophes and more are all just a part of life, they tell us, and thus can't ever really be eradicated. So we're wasting our time and money to try. (Look, if something can’t be solved with a tax cut, is it really even a problem?)

“We should take necessary precautions with respect to COVID, but we also understand that we do have everlasting life if we believe in Jesus, if we believe in God the father, and I certainly do,” Reeves explained, which may not be the most comforting words for all the families of the 8,905 Mississippians who died.

And so, in the most advanced medical country in the world, we’ve endured 40.9 million people being sickened by COVID and 658,865 dying — the equivalent of the lives lost in 219 9/11 events. More than 20,000 of those deaths are Michiganders. Meanwhile, Republican leaders like Shirkey trash vaccines and thrash mask mandates in schools as the “dumbest thing,” even though child hospitalizations for COVID are at an all-time high.

Of course, a loud minority of Americans are following their lead, feeding on anti-vaxxer propaganda and other COVID misinformation, while harassing and threatening school board members and health officials. They’re endangering millions, even their own children.

But it’s critical for the majority, those of us who still have a working moral compass, to stand our ground with local, state and federal officials and advocate for reasonable health policies. No child, no parent, no grandparent should be sacrificed at the altar of cynical politics and conspiracies.

After almost two years into the pandemic, we have the tools to stop mass suffering and death. There’s no excuse to give up the fight — or our basic humanity.

Originally published September 12, 2021 on Michigan Advance. It is republished here with permission.

Susan J. Demas is a 22-year journalism veteran and one of the state’s foremost experts on Michigan politics, appearing on MSNBC, CNN, NPR and WKAR-TV’s “Off the Record.” In addition to serving as Editor-in-Chief, she is the Advance’s chief columnist, writing on women, LGBTQ+ people, the state budget, the economy...
Read More about Susan J. Demas, Michigan Advance
Scroll to read more Metro Detroit News articles